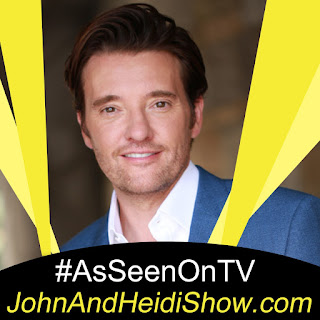 He's also been on other hit TV shows like Scandal, Homeland and The Blacklist and Alcatraz. In addition to several films.

He now has a NEW TV series NEXT, Tuesdays 9/8ct on FOX TV. He plays Ted LaBlanc, a Silicon Valley pioneer who discovers that one of his own creations -- a powerful A.I. called neXt -- might spell doom for humankind, so he tries to shutter the project, only to be kicked out of the company by his own brother, leaving him with nothing but mounting dread about the fate of the world. https://www.facebook.com/NEXTonFOX/

Having trouble finding that perfect gift for somebody this holiday season? The answer might lie in your kitchen. A new survey found that the overwhelming majority of us (73 percent) would rather receive the gift of food over some type of object or thing this year.

There’s a good chance a gift under your Christmas tree may be re-gifted. 26 percent of respondents say they’ve re-gifted an item once in their life. 33 percent of women say they’ve done it and 19% of men admit to giving second-hand presents.

A call about a vehicle dragging a gas pump hose led police in Northern Michigan to a meth discovery. State police responded about 10:20 p.m. Friday, December 4th to a report of a vehicle dragging a pump handle and hose. A Trooper made a traffic stop and soon discovered meth on both the driver and inside the vehicle. A passenger also was in possession of meth. Upon making the stop, police asked the driver, a 42-year-old Gladwin man, if he forgot anything at the gas station. The driver told police he did not believe so. Troopers gave the driver a sobriety test and, following that, placed him under arrest. They then found the meth on both the driver and passenger. Both were taken to the Roscommon County Jail. (https://bit.ly/2VLLb7u)

Please let me know if you can mention- thanks so much.

What is your favorite classic holiday movie?

It's A Wonderful Life

What’s your favorite tradition around the holidays?

Which is your favorite holiday movie made since 2000?

It is research well worth raising a glass to: beer can be good for our health. Scientists discovered that some beers are bursting with probiotic microbes — bacteria and yeast credited with a host of benefits, from combating obesity to getting a better night’s sleep. Examples include some Belgian beers (Hoegaarden, Westmalle Tripel, Echt Kriekenbier) which are rich in probiotic yeast. Unlike most beers, these are fermented twice — once in the brewery and again in the bottle.

Coffee that tastes a bit off might taste a bit better if you pour it into a mug of a different color. A barista noticed customers complaining about the bitterness of coffee when drinking out of a white mug. However, when the customers drank the same coffee out of a clear cup they did not complain. This gave the barista an idea for a new study. Researchers experimented with clear, white, and blue containers and the same type of coffee. They asked participants to analyze the taste of the coffee, and the results were pretty conclusive: The brain definitely associates color with flavor. The study found that drinking from a white container tastes “significantly more intense” or less sweet than drinking from a blue or clear container.

It seems nobody misses sitting in the dark with a jumbo popcorn more than Wisconsinites. A new survey finds residents of the Badger State miss movie theaters more than any other state during the COVID-19 pandemic, which has shut down or sharply reduced capacity for theaters around the world. Tech site GoHastings.com, which specializes in compiling maps about trends in entertainment, streaming services and more, combed through Twitter, tracking tweets and keyword phrases such as “I miss movie theaters” and “I miss going to the movies” in more than 200,000 tweets. Using geotagged Twitter data, GoHastings.com then mapped where those phrases came up more often. No. 1 was Wisconsin, followed by Utah and Oregon.

If you need to buy a gift for the kids in your family (or you want to splurge on yourself), it’s hard to go wrong with LEGO. The plastic brick sets are as popular as ever; so popular, in fact, that you may have trouble getting your hands on one. Now, the LEGO store is helping customers get the models they need in time for the holidays as LEGO.com will notify you when a sold-out kit you like is back in stock.

Israel’s former Space Security Chief says mankind has made contact with The Galactic Federation of Aliens but they’re refraining from announcing it because humanity is not ready. (https://bit.ly/3m69Sqd)

A hunter tracking a deer in the Czech Republic was surprised when the buck circled back right to him. Local police say the rifle, which the hunter had slung over his left arm — fortunately without ammo — slipped onto the deer’s antlers and it disappeared with him. Police believe the story: another hunter about a mile away also called them to report seeing a deer armed with a rifle. Police are asking the public to call them if they spot the armed deer, or an abandoned rifle.

According to police, a man walking into the Neiman Marcus store at an Atlanta mall Saturday night accidentally set off his gun while he was “adjusting his pants.” The gunshot rang out through the Lenox Square mall around 6:00 p.m. on Saturday. Witnesses initially told police there may have been a “dispute” between two people, but officers confirmed that no such fight happened. Instead, the armed man fired the “accidental” discharge while adjusting. No one was injured, but the man fled the scene and has not been identified or located. Sergeant John Chafee said, “We urge gun owners to be responsible and we would recommend they leave their firearms at home while they are out shopping in public areas.” (https://bit.ly/39TIR6H)

A man was busted for abusing 9-1-1 after he called to report a stripper who refused to give him, QUOTE, “boom boom” ..... FAKE NEWS