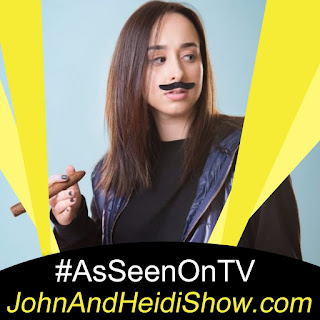 Today we visit with Ali Kolbert. She got her start working as a page at NBC in the famous 30 Rock building, working on shows such as Saturday Night Live and Late Night with Seth Myers. It wasn’t long after when she made her TV debut in the very same building as a guest on The Tonight Show with Jimmy Fallon. She’s since performed her stand-up on NBC’s Bring the Funny, The Today Show, A Little Late with Lily Singh and truTV’s Comedy Knockout, as well as comedy festivals across the country.

Now, Ali stars in the hilarious new truTV series Top Secret Videos. Part work-place comedy/part home video clip show, Top Secret Videos follows a group of interns at the “NSA” whose job is to catalog all of the organization’s pointless security camera footage. Ali and fellow comedians Brian Posehn and Ron Funches lend their own hilarious commentary to the most ridiculous, embarrassing and bizarre videos they’ve ever seen! https://www.trutv.com/shows/top-secret-videos

A new study found that a mink has tested positive for COVID-19 in Utah, becoming the first wild animal to catch the disease in the U.S. (https://bit.ly/387jv2L)

Court records show that a convicted felon whose alias is listed as “Bud Light Mike” in police records was arrested Saturday after allegedly stealing a case of America’s favorite beer. According to Florida police, Michael Filipkowski swiped twenty-four cans of Bud Light from a Publix supermarket in Treasure Island. 51-year-old Filipkowski was subsequently arrested after being found in possession of twenty-one of the purloined cans. Since his rap sheet includes multiple prior theft convictions, he was charged with a felony theft count. He is locked up in the county jail in lieu of $2,000 bond. An arrest affidavit lists the New Jersey native’s alias as “Bud Light Mike.” Court records reveal how Filipkowski earned that handle. In April, he was convicted of stealing a case of Bud Light from a Wawa convenience store in Clearwater. He has twice been convicted of carrying an open container of Bud Light, once on the beach and once at a bus stop. He also has been convicted of stealing two 18-packs of Bud Light from a Speedway store. (https://bit.ly/3mSqJhc)

George Clooney was hospitalized with pancreatitis after losing 28-pounds for his new film, “The Midnight Sky.” (https://pge.sx/37NbcsK)

New York City announced that the Times Square Ball Drop will take place without spectators for the first time since 1907.(https://bit.ly/38e7cll)

Kylie Jenner was the highest earning celebrity in 2020, bringing in $590 million. (https://et.tv/2KbCLUP)

Photos of two undercover cops who dressed as Santa and an Elf to take down a pair of suspected car thieves in California have gone viral. (https://bit.ly/37klcdR)


Workers rioted at a Taiwanese-run iPhone factory over claims they’re being exploited by the company. (https://bit.ly/3mjygo0)

Police in Italy were called about a man who was standing in the middle of the busy road directing traffic. But when they arrived the man had left the area and couldn’t be located. Witnesses say the man was directing traffic with a bag of frozen peas.

A study finds the average person will spend the equivalent of 43 days of their lifetime struggling to open troublesome packaging. The survey claims we spend 19 minutes a week trying to get into tricky packaging which is secured with too much tape, cable ties or even items which are screwed into place. Vacuum-packed plastic wrap and stuck jars are also among the encasements many find themselves struggling to open.

The manager of a pizza restaurant in Norway got a nice surprise when a customer attempted to purchase a pizza with the manager’s own credit card which had been stolen the day before. He called the police, had the suspect arrested.

In a survey, our favorite smells are freshly baked bread, clean sheets and freshly mowed grass. After the top three we like flowers, freshly ground coffee, fresh air after rain, vanilla, chocolate, and cooking bacon.

Former female boxer Vivian Obenouf is accused of beating her husband to death after his body was found in Switzerland. (https://bit.ly/2VQOSsO)

A bald Kentucky man caused a disturbance at a salon after he asked a worker if she “had a product to bring his hair back and she told him no.” 46-year-old Jeffery Trent was arrested late last month after allegedly causing a disturbance inside a salon in Lawrenceburg. As detailed in a court citation, the 6’3”, 250-pound Trent walked into the Frame Clinic and Gallery around 10:40 a.m. and asked about “product to bring his hair back.” An employee at the salon--which also doubles as an art gallery and frame shop--told Trent that no such magic potion was available. At this point, cops report that Trent “became belligerent and created a disturbance inside the business.” He was subsequently arrested on a misdemeanor disorderly conduct charge and booked into the Shelby County Detention Center. In an unrelated case, Trent, who remains behind bars, is facing charges for arson and criminal mischief. (https://bit.ly/3lOBaB8)

A scorned New Mexico woman tried to run over her ex-boyfriend and his new flame with her car — and then plowed into his home when she missed. Wild video footage shows 25-year-old Amanda Gonzales in a heated November 15th spat outside the Las Cruces home of her former boyfriend, where he was staying with his new girlfriend. The pair start bickering outside the home when Gonzales is seemingly pushed to the ground, setting her off, the clip shows. “That’s what I needed,” Gonzales said. “That’s what I needed.” Police said the woman then admitted to hopping into her gray 2015 Nissan Altima and trying to run over the new lovers — only to miss her intended targets. Unsatisfied with her efforts, Gonzales backed up and rammed into the home, leaving a gaping hole in the side of the residence. She then slammed her Altima into reverse, but the vehicle got stuck in rock landscaping in front of her ex’s house. She was charged with felony counts of aggravated assault with a deadly weapon and criminal damage to property over $1,000. (https://bit.ly/33Oo5l8)

A Pensacola Woman was fired from her doggie daycare job after being caught smoking marijuana in an enclosed playpen with a group of dogs ….. FAKE NEWS

'Well, I Am An Angel You Know': Dolly Parton Saves The Life Of Child On Set Of Christmas Special
https://www.sunnyskyz.com/good-news/4071/-039-Well-I-Am-An-Angel-You-Know-039-Dolly-Parton-Saves-The-Life-Of-Child-On-Set-Of-Christmas-Special