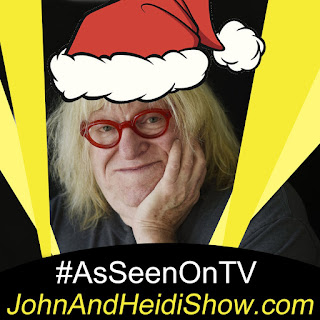 Today we visit with Bruce Vilanch, an American comedy writer, songwriter and actor. He is a six-time Emmy Award-winner. Vilanch is best known to the public for his four-year stint on Hollywood Squares, as a celebrity participant; behind the scenes he was head writer for the show. From 2000 to 2014, Vilanch was the head writer for the Oscars, after being an Oscar program co-writer for the previous ten years. He is a featured writer for the Tonys, Grammys and Emmys.

We have him on Christmas Day to talk about a HOLIDAY RELATED project he was involve in back in the 1970's... the Star Wars Holiday Special.

• A box of Hot Pockets

• A Ziploc bag with coffee (enough to make one pot)

According to a survey, 20 percent of the people surveyed said cheap perfume is the worst Christmas gift.

A man in England suspected of drunk-driving tried to escape police by hiding. After crashing his car the man attempted to hide from police in a large shed housing a nativity scene.

A Kentucky Mayor was arrested for DUI after she fell asleep at a White Castle Drive-Thru and crashed into a pole. (https://bit.ly/33IE0Bz)

Tom Cruise continues to be mocked for screaming at crew workers who violated social distancing guidelines on the set of the new “Mission Impossible.” (https://pge.sx/34mdUEx)

Netflix has renewed its popular romance drama series “Virgin River” for a ten-episode third season. The contemporary romance story is centered on a nurse practitioner’s recent move to the remote California town of “Virgin River.” (https://bit.ly/34uKR1D)

Holiday gatherings are looking different this year due to the ongoing pandemic, but at least we can still decorate Christmas trees. In such a volatile year, it’s important to appreciate the little things — which may be why Baby Yoda has become the unofficial Christmas tree topper of 2020. Folks on social media started sharing their Baby Yoda tree topper pics a couple weeks ago, spurred by a tweet that showed Grogu looking perfectly handsome in his elevated spot. https://twitter.com/taylorjane___/status/1335719391061815298

Here’s a guy playing Jingle Bells on 8 different wrenches. Grab some random objects and see if your co-hosts can guess what holiday tune you’re playing.
https://www.youtube.com/watch?v=1SE0t2cS65A&feature=youtu.be

How many lights would it take for your Christmas tree to be seen from space? Scientists ( University of Leicester) reveal it would take 2,683 LED bulbs to make your festive decorations visible from orbit. Student researchers were inspired by the theme of 2006 Christmas film Deck the Halls. In the movie, Danny DeVito’s character Buddy Hall sets himself a mission to use Christmas decorations to make his house visible from outer space.

Christmas cards are over 175 years old. The custom originated in England, where college students at the Royal Academy sent letters home at the end of the year on religious stationery. They told their parents how good they had been and asked for money. In 1843, London businessman Henry Cole manufactured 1,000 cards with the greeting “A Merry Christmas and a Happy New Year to You.”

Christmas tree-related injuries are on the rise. At least that’s what a survey (from LendingTree) has found. According to the survey, 1 in 5 Americans have reportedly been injured while setting up their Christmas tree this year. This number is 122% higher than last year. Of those who admitted they were injured by a Christmas tree, most were men. And when it comes down to which generation has been hurt the most from a Christmas tree this year, it was largely the whippersnappers getting tree-related boo-boos. Twenty-seven percent of Gen Z said they have been injured followed by 24% of Millennials. Only 5% of Baby Boomers reported experiencing the same.

One medium candy cane has only 50 calories and no fat.

A video of a thief stealing a Grinch statue off of a family’s porch in the UK has gone viral. (https://bit.ly/3mvUkvX)

A Wisconsin driver was pulled over for driving a car decked out in colorful Christmas lights. A state trooper credited the driver for his creativity, but warned him it is against state law to drive with the festive lights display. Wisconsin State Patrol posted a photo of the sports vehicle covered in bulbs to their Facebook page. One of the commenters to the post was a man who said he was the driver’s father. “Yep this was my kid! As a retired cop myself I warned him of the violations of these lights. But we all know kids,” Larry Kamholz wrote. He added, “Anyways, my son said this Trooper was really nice and she kinda laughed at him. Trooper, whoever you are, thanks!” (https://bit.ly/2LCXXmY)

An Amazon delivery person reportedly got too close for comfort for one man in the U.K. Jonathan Doblips was perturbed by security camera footage he saw showing a delivery person breathing on his window and doodling an unintelligible message. The unidentified delivery person then leaves the package at Doblips’ doorstep before marching back to his nearby van. The incident, which happened recently at Doblips’ Derbyshire home, was posted to Amazon.co.uk’s official Facebook page on Sunday. “Excuse me but what is this delivery driver doing on my window?” Doblips wrote alongside the accompanying security footage. Under the same Facebook post, Doblips shared he felt unsettled that the delivery person took a moment to peer into his window. He went on to call the behavior “highly inappropriate.” The e-commerce giant’s Amazon Help page quickly replied to Doblips’ inquiry with a statement that suggests the matter is being investigated. (https://fxn.ws/372qY3R)

An Ocala Man was arrested after throwing a live baby alligator into a Walmart when they refused to let him in without a face-mask ….. FAKE NEWS