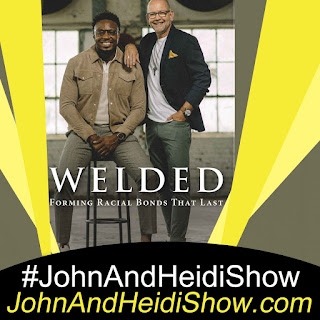 We visit with pastors Derrick Hawkins and Jay Stewart. They formed an unbreakable bond centered on their unshakable faith. In their new book, Derrick and Jay recount the two-year journey that led to the merging of an African American church with a predominantly white mega church.

Nine in 10 Americans don’t trust other drivers to stay safe on the road in the winter. That extends to our loved ones, too: Almost a quarter (23 percent) avoid riding with a friend or family member during the winter because they don’t trust their driving. A survey asked adults about how they approach cold weather behind the wheel. Incredibly, 91% of drivers don’t think others on the road know how to drive safely in the winter.

According to a new poll conducted by OnePoll on behalf of Apple Vacations, a recent study finds that 84% of Americans say they dearly miss traveling this year. The study also says that the average American has gone fourteen months without traveling due to COVID-19. (https://bit.ly/34wtUE3)

A Massachusetts native now living in Florida was arrested Saturday evening for allegedly battering a “partially disabled” victim who “disagreed with the defendant about liking teams from Boston.” Police charge that 59-year-old Jeffrey Randall engaged the victim “in an argument about sports teams from Boston” while the men were inside Randall’s St. Petersburg residence Saturday evening. When the victim disagreed with Randall “about liking teams from Boston,” Randall became “physically aggressive and pushed the victim twice in the chest.” “The victim is partially disabled and unable to defend himself,” a sheriff's deputy reported. Randall, arrested on a misdemeanor battery charge, was released from the county jail yesterday morning on his own recognizance. Randall’s rap sheet includes convictions for theft, trespassing, disorderly intoxication, and probation violation. (https://bit.ly/37k18IE)

Kylie Jenner was shopping when a group of animal rights activists approached her on Saturday and called her a “monster.” Jenner was leaving Moncler – a store that sells luxury coats with fur – in Beverly Hills when she encountered the group of protesters. (https://bit.ly/3h6HKlz)

Cameo CEO Steve Galanis has apologized for disclosing how much Seinfeld Actor Larry Thomas is making for doing personal greetings as the Soup Nazi. (https://pge.sx/3mxO1Ie)


In Russia an unidentified man stole a nice looking car from a repair garage and was really enjoying its acceleration when he noticed something. It had no brakes. He sailed through a couple of traffic lights before crashing into another car. Police helped him from the wreckage before hauling him off to jail.

Do you end your text messages with periods? If so, stop it. Researchers showed college students examples of text conversations presented on a phone and through hand-written notes and found that kids rated phone-based sentences that ended in periods as less sincere than those that didn’t. They didn’t note the same effect in hand-written notes.

The New York City Subway announced plans to increase fares next year. The fare increase is supposed to arrive in February. https://bit.ly/3g3pEAG

The website Straight Dope dates the practice of fasting to combat fever to a 1574 dictionary. A 2002 article from New Scientist cites a Dutch research team that ran an experiment and came to the conclusion that “eating a meal boosts the type of immune response that destroys the viruses responsible for colds, while fasting stimulates the response that tackles the bacterial infections responsible for most fevers.” But the evidence is far from conclusive. Colds and flus are caused by viruses, and your body needs energy to fight them. Stay at home, eat light, healthy food when you’re hungry, and drink lots of fluids.

‘Tis the season to be dumped. December 10, 11, 12 are the dates couples are most likely to breakup. Statisticians looked at data from Facebook, analyzing thousands of messages looking for signs of a break up. From their investigations, they deduced that the peak break-up periods around the holidays fall two weeks before Christmas Day. The reasons for the breakups vary. For some, the idea of spending the festive period with someone they’re having doubts about brings a wave of dread. For new couples, many decide that they don’t want to bring their new date home to meet the parents or they don’t want to meet yours. For the thrifty, some realize that they’re new partner is not worth spending on.

Linguine. The literal meaning of the Italian word is “little tongues”.

Just two weeks after it was announced China was developing biologically enhanced super soldiers, France has joined the fray in creating terminator troops that can be “bred to kill.” (https://bit.ly/38gT7DG)

An Instagram star who used makeup and editing to make her face look like a “Zombie Angelina Jolie” was sentenced to a decade in an Iranian prison a year after she was arrested for her social media activities. 19-year-old Sahar Tabar, whose real name is Fatemeh Khishvand, gained nearly 500,000 followers after posting images of her eerily gaunt face. Tabar’s lawyer confirmed his client was sentenced to ten years in prison in the past few days. She was charged with corruption of young people and disrespect for the Islamic Republic. She was also charged with blasphemy and inciting violence when she was arrested in October 2019 along with three other Instagram influencers. She was cleared of those charges. Iranian state TV broadcast her confession in late October last year. (https://bit.ly/3qXPZ8n)

Police say that a Michigan man who became angry when he was told his direct deposit hadn’t cleared yet took his anger out on his bank, throwing a heavy animal trap and concrete chunks through the building’s windows. 51-year-old Stephen Lee Wallace of Chelsea was arraigned Friday, December 4th on two felony counts of malicious destruction of property after being arrested for allegedly throwing various heavy items through the windows of Chase Bank in Ann Arbor. At about 9:45 a.m. Thursday, December 3rd, Wallace entered the bank and asked about a direct deposit he was expecting to be available in his account. Wallace was told the deposit hadn’t cleared yet, leading him to grow frustrated and angry, yelling at employees as he left the bank. Once outside, Wallace began throwing various objects at the ATM outside before picking up an animal trap with a concrete base and throwing it through the window. If convicted, Wallace faces up to five years in prison and or a fine of $10,000 or three times the value of the damaged property, whichever is greater. (https://bit.ly/3m96Dhs)

A Florida man was bitten by a shark and walked home bleeding where a woman called 9-1-1 and had him taken to a hospital. News outlets reported the man was swimming in the waters off Siesta Key, Florida, when the attack happened. WTVT reported a woman called 9-1-1 and said the 39-year-old man had been bitten on his hand and arm and was bleeding profusely. She was heard reassuring him “everything's going to be OK.” Sarasota Memorial Hospital spokesman Kim Savage said a man had been admitted Tuesday and the wound was confirmed to have been a shark bite, but she said she could not provide any more details on his condition or personal information. (https://bit.ly/2WifiUu)

MacKenzie Scott, Ex-Wife Of Jeff Bezos, Has Donated $4 BILLION To Help Those Affected By Pandemic
https://www.sunnyskyz.com/good-news/4078/MacKenzie-Scott-Ex-Wife-Of-Jeff-Bezos-Has-Donated-4-BILLION-To-Help-Those-Affected-By-Pandemic