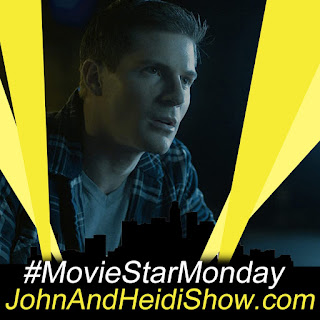 Robert recently starred in two action thrillers, LAST THREE DAYS Jack (Robert Palmer Watkins) is a police officer with a marriage on the rocks working undercover to take down a Japanese crime syndicate. One night things go south and he wakes up to discover he's missing his partner, his wife, and the last three days of his life.

A group of French Scientists have conducted a study that’s trained dogs to sniff out COVID-19 on infected humans. (https://bit.ly/3p13hiH)

In Finland, a man went to a hotel and threatened the receptionist with a weapon, demanding money from the register, and some booze. The receptionist was then taken to an ATM to withdraw money and then forced into a taxi. The thief then drank to the point where he passed out, giving the taxi driver time to alert police.

BuzzFeed News is reporting that Ellen Degeneres is losing major sponsors and A-List guests since the summer scandal over her mistreatment of workers. https://bit.ly/37RSqAv)

The Nickelodeon hit “iCarly” is getting a reboot on the new CBS streaming service. (https://bit.ly/3m22k7P)

Researchers say letting children play video games in the operating room before undergoing surgery can help relax them better than tranquilizers or holding Mommy’s hand. Doctors found that allowing children a few minutes to play the games reduced their anxiety until the anesthesia took effect.

If you’d like your kids to read more books, a new study is offering up a furry solution. Researchers from the University of British Columbia say that simply sitting down with a book in the presence of a dog can help motivate children to read more. The study focused on whether a child would be motivated to continue reading longer and persevere through moderately challenging sections of of a book when they are accompanied by a dog. The findings showed that children spent significantly more time reading and showed more persistence when a dog — regardless of breed or age — was in the room as opposed to when they read without them.

In Italy a senior citizen was arrested for trying to snort cocaine during a police traffic stop.

A survey says 72% of women think shopping helps them when they feel depressed. Roughly the same number view shopping as a recreational activity.

Sweden has implemented a mandatory lockdown for the first time since the Coronavirus started in March. (https://on.wsj.com/39LXuZR)

Ten high school football players are suspended in Florida following a wild post-game brawl in a playoff game last month. The Florida High School Athletic Association also fined Wekiva High School $500 after referees’ filed a report on the fight. Officials say Wekiva players physically confronted opponents from New Port Richey Mitchell High School after losing a playoff semifinal game on Nov. 27th. According to a report, “After the game was over the Mitchell team was basically attacked by a few of the Wekiva players, resulting in the whole team from Wekiva charging over.” The incident took place after Mitchell took a knee on the last play of the game to run out the clock. School administrators said that nine members of the losing team left the sideline area to push and punch opposing players. One student was seen throwing helmets at a player who was lying on the ground after being punched multiple times. Local law enforcement agencies are not pressing charges against anyone involved, because they say no victims have come forward to file a report. School officials say they accept the fines and suspension and will not appeal the sanctions.(https://bit.ly/36RTgOt)

Just days after some fifty Christmas trees were stolen from a local hardware store, the Spokane Police Department said it has arrested the real life “Grinch” who stole them. Upon reviewing store security video at River Ridge Hardware, it was clear the incident happened at 3:30 a.m. when someone packed the trees into a trailer. A post on the store’s Facebook page asked the public to share any information they might have with the Spokane Police Department. On Monday, officers with the Patrol Anti-Crime Team and Downtown Neighborhood Resource Officers began investigating the incident. The investigation led to the arrest of 49-year-old Eli P. Vansickle. After his arrest, Vansickle told police where the trailer used in the burglary was stashed in Spokane, leading to the recovery of the stolen trees. Vansickle has a felony record and was jailed on suspicion of burglary and theft. (https://bit.ly/37JOJNn)

'I Wasn't About To Let Someone Steal Your Joy': Anonymous Neighbor Replaces Kid's Stolen Scooter
https://www.sunnyskyz.com/good-news/4072/-039-I-Wasn-039-t-About-To-Let-Someone-Steal-Your-Joy-039-Anonymous-Neighbor-Replaces-Kid-039-s-Stolen-Scooter