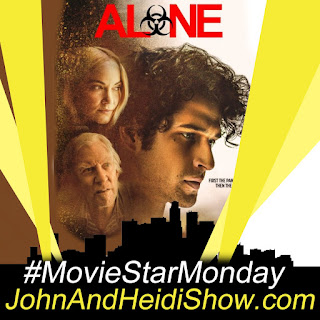 It's a #MovieStarMonday with Tyler Posey (Teen Wolf, Scary Movie V, Marvel Rising) we will talk about his new film ALONE.

Planning to make a resolution for 2021? You might want to try something besides losing weight. A new survey finds the average person sets a goal to eat healthier four times each month – and follows through with none of them. This is also great news for gym regulars. Mainly because these are the same people who sign up to work-out in January and done before February. (https://bit.ly/3h4bIH3)

A survey found that half of remote workers admit to drinking during their workday. (https://bit.ly/3gTP97W)

Someone returned a stuffed hare on Tuesday that had been stolen from an Indiana restaurant last week. Surveillance video showed an unidentified customer at “The 1933 Lounge” picking up the taxidermized hare called “Theodore A. Hare” on Friday night. The animal, dressed in a fancy hat and carrying an old shotgun, serves as the restaurant’s mascot. The restaurant posted about the stolen hare on social media, and it offered a $500 gift card for its return. Bryn Jones, vice president of marketing and retail for the restaurant’s owner, Huse Culinary, told the Indianapolis Star that replacing the hare would have cost about $1,000. “No questions asked and no hard feelings,” the restaurant tweeted. “Our only hope is he is returned unharmed.” The hare turned up back at the restaurant on Tuesday night, when someone dropped him off in a trash bag with a note apologizing. “Sorry! This was a drunken mistake,” the note read. “He was well taken care of!” (https://fxn.ws/3m7G8sG)

Swedish actor Dolph Lundgren has been seen running errands in L.A. with a wedding band on, sparking rumors that he married personal trainer Emma Krokdal, who is forty years younger than him. (https://pge.sx/37qUCQk)

Adolph Hitler’s pet alligator, which passed away at the age of 84 in May, is going to be stuffed and put on display at a Russian Museum. (https://bit.ly/2W97u7t)

A video of a group of surfers riding giant forty-foot waves in Northern California has gone viral. (https://cbsloc.al/3a6EeWZ)

A 90-year-old grandmother became the first person to get the COVID-19 vaccine last Tuesday. (https://yhoo.it/36XlEi1)

Apple is temporarily closing all stores in California amid an ongoing surge of COVID-19 cases in the state. (https://bit.ly/2LLtvqO)

Connecticut Police arrested a Mall Santa who exposed himself to a woman. (https://bit.ly/3qEmM1U)

A 9-year-old girl played music on a synthesizer for six hours straight while undergoing brain surgery in India. (https://bit.ly/37odq2B)

A love-struck British Romeo who landed in hot water after riding a jet ski across the Irish Sea to visit his gal pal amid the coronavirus pandemic had less than ten minutes of fuel left — and doesn’t even know how to swim. 28-year-old Dale McLaughlan, who never rode a water scooter before, spent four-and-a-half hours on the craft in his madcap dash to visit his new girlfriend on the Isle of Man. The North Ayrshire man was jailed for four weeks on Monday after admitting to arriving there unlawfully. “The craziest thing is he can’t even swim,” a family source told the Daily Mail about McLaughlan, describing him as a “nice lad, but thick as a brick.” A police source also told the Isle of Man Newspapers that the man’s watercraft only had ten minutes of fuel left after the 25-mile journey, which he initially thought would only take forty minutes, when he encountered rough weather. (https://bit.ly/34oK1DF)

A Tijuana man who smuggled more than 300 pounds of protected sea cucumbers into the United States was sentenced Monday to six months in custody by a federal judge in San Diego. According to court documents, 52-year-old John Jaimes Torres drove into the United States at the Otay Mesa Port of Entry last year with 101 undeclared packages of sea cucumbers concealed in the bed of his pickup truck. The cucumbers, which are protected under the Convention on International Trade in Endangered Species, require a certificate of origin and import/export licenses from CITES and the U.S. Fish and Wildlife Service for lawful importation, none of which Torres possessed. The value of the cucumbers exceeded $60,000. Torres, who was ordered to surrender to authorities by Feb. 12 to begin his sentence, was also ordered to pay $10,000 in restitution to the Mexican government as compensation for the loss of its natural resources. (https://bit.ly/2KmTWT7)

A Palm Bay, Florida man is accused of breaking into a home and attacking the homeowner, all while completely naked. 55-year-old Arthur Currie was arrested around 11:00 p.m. Thursday after the homeowner said Currie entered his Melbourne home. Deputies said Currie attacked the homeowner and when deputies arrived, he gave them a false name. According to the report, Currie is on felony probation. Currie was arrested on charges of burglary and battery, giving law enforcement a false name, and violating probation. The arrest report narrative did not state why Currie was not clothed or why he entered a home that was not his own. (https://bit.ly/34cu6bx)

Mayor Hopes To Boost The Economy With '2,000 Acts Of Kindness' Challenge
https://www.sunnyskyz.com/good-news/4079/Mayor-Hopes-To-Boost-The-Economy-With-039-2-000-Acts-Of-Kindness-039-Challenge