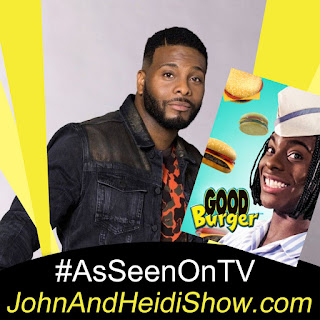 Today we visit with Kel Mitchell. Actor, stand-up comedian, musician, singer, and rapper. (All That, Kenan & Kel, Good Burger, Game Shakers, Dancing with the Stars, and voice work on Motorcity, The Adventures of Rocky and Bullwinkle &Clifford the Big Red Dog)

A study by Highland Institutions finds that two-thirds of Americans are living paycheck to paycheck during COVID-19. (https://bit.ly/33RKm1D)

A survey from WalletHub named Fort Lauderdale, Florida as the least safest city in America because of the dangerous weather events and the high volume of COVID-19 cases. (https://bit.ly/37JmHBg)

Authorities say that an Arizona woman was found hiding 445 fentanyl pills in her pants after deputies noticed she was walking in an odd way during her arrest over the weekend. The Yavapai County Sheriff’s Office said in a statement that 20-year-old Olivia Jordan and 32-year-old Richard Carlson were arrested Sunday after deputies pulled their vehicle over for moving violations and suspected the pair were involved in illicit narcotics possession and possible narcotics sales. Jordan and Carlson were both arrested and their car was towed. But deputies said they noticed Jordan walking funny. “Deputies noted that Jordan was walking in a manner indicating she may have contraband concealed in her pants,” the sheriff’s office said. Jordan refused to cooperate until deputies reminded her that bringing illegal items into jail would result in additional felony charges. She then “admitted to carrying ‘stuff’ in her pants” and “removed a clear bag containing approximately 445 fentanyl pills from her groin area.” (https://fxn.ws/2VX757T)

British chef Nigella Lawson is being mocked for pronouncing the word microwave as “meekro-wah-vay.” (https://eonli.ne/3guOmdm)

A maskless Florida man was arrested for coughing and spitting on the Geek Squad at Best Buy. (https://bit.ly/3gsCGYC)

Massachusetts police arrested a man who was found on the couch in the Brookline Mansion Tom Brady used to live in. (https://bit.ly/3lRmYHC)

If people who run all the time make you LOL, there’s a reason to make fun of their certifiably crazy habits: In a review of 15 years’ worth of studies on the health benefits of running, researchers found that you don’t have to run all that much to max out on running’s health benefits. Lacing up just once or twice a week for just 50 cumulative minutes — no more than 6 miles per week — provides plenty of protection against cardiovascular disease, chronic disease, and early death by any cause.

A Chipotle restaurant on the upper west side of New York is being plagued by hordes of hungry rats. (https://bit.ly/2Kb6KM5)

An Oregon woman who survived a fall into a volcano while she was skiing on Mt. Hood last week said she was terrified of dying. Thankfully, her husband was able to get her out. (https://abcn.ws/33XBI1s)

The average American can name only eight Presidents.

An Egyptian “Instagram Model” and her photographer were busted for staging a photo shoot at the 4,700 year old Step Pyramid of Djoser. (https://bit.ly/36CugKP)

A driver in England tried to shake off police by activating a homemade James Bond smoke screen from his car. The 62-year-old was being pursued by an officer when he flicked a switch on his car’s dashboard, leading to “colossal” amounts of smoke billowing out of the exhaust pipe. Police caught up with the driver five miles later. The man had a bucket of diesel fuel behind the passenger seat that was connected to a pump with a pipe leading into the exhaust. An electrical system was linked to the pump, battery and a dashboard switch. He could then flick the switch which would drip diesel into the hot exhaust pipe and produce clouds of smoke.

Two men are serving jail time China after stealing a luxury car and taking it for a joyride. The men found the key fob to an Audi left behind on an ATM. When they pressed the fob’s auto-unlock button the car beeped from roughly 200 feet away. Because neither man knew how to drive, they hunkered down at an Internet cafe to learn how to start and drive the vehicle. After a day of cramming, they drove off with the car. They were caught after running a red light.

A woman got married to a tree so it could not be legally cut down ….. FLORIDA (https://bit.ly/2PEapPO)

Mystery Artists Scale Abandoned Factory In Montreal To Decorate It For Christmas
https://www.sunnyskyz.com/good-news/4068/Mystery-Artists-Scale-Abandoned-Factory-In-Montreal-To-Decorate-It-For-Christmas