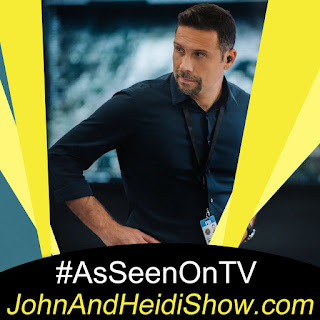 Today we visit with Jeremy Sisto (Six Feet Under, Law and Order, Clueless, Break Point & more) about his current show FBI. Now in it's THIRD SEASON on CBS.

From Emmy Award winner Dick Wolf and the team behind the Law & Order franchise, FBI is a fast-paced drama about the inner workings of the New York office of the Federal Bureau of Investigation. This elite unit brings to bear all their talents, intellect and technical expertise on major cases in order to keep New York and the country safe.

A study from Norway found that kids who play sports experience lower levels of depression. The study found that the physical activity from sports was the key to avoiding depression. (https://bit.ly/3mlVk5T)

A survey by the Atlanta Airport Blog found that airline passenger satisfaction has hit an all-time high during the pandemic. (https://bit.ly/3mriojF)

Firemen in a town in Germany had put out a fire caused by a man who drank too much, wet his bed, and then set fire to his apartment by leaving a blow-dryer running on the bed to dry it.

Meghan Markle honored COVID-19 workers who fought on the front lines during a surprise appearance on CNN’s Heroes Special. (https://bit.ly/2LwTuCh)

Real Housewife of New Jersey Teresa Guidice was seen kissing her new boyfriend Louie Ruelas during a date night in New York City. Ruelas is 46 and Guidice is 48. (https://pge.sx/34ew3Ej)

The FDA will allow Doctors to use extra doses of the Coronavirus vaccine that were found inside the vials, which means the U.S. now has more doses than previously believed. (https://bit.ly/37qCR3O)

Tyson has fired seven top managers after they placed bets on how many workers would get the Coronavirus at a chicken plant in Waterloo, Iowa. (https://bit.ly/34pePEe)

An Indiana murder suspect escaped from a prison van that stopped at a McDonald’s drive-thru. (https://bit.ly/2KhPLIt)

A beloved 70-year-old Taco Bell Worker who has been working at the same Florida location for the last twenty-years was brought to tears when he was given a massive tip this week. Joe DeCicco -- known in the drive-thru as “Taco Bell Joe” -- received a $6,095 check from a local group. (https://fxn.ws/3nDveN9)

The tradition of candy canes at Christmas started in 1670 to honor Saint Nicholas who always carried a shepherd’s crook.

McDonald’s is reportedly planning to debut a “spam burger” topped with crushed Oreos in China this week. (https://bit.ly/3mJGUNb)

A man was arrested after climbing onto the wing of a plane that was ready to take off from Las Vegas’ McCarran International Airport on Saturday. The Alaska Airlines flight from Las Vegas to Portland, Oregon was preparing to leave the runway when the pilot noticed a man approaching the Boeing 737 and alerted the control tower at around 2:00 p.m. Las Vegas police and airport officials immediately responded to arrest the man, who had climbed onto the left wing. Video taken by a passenger shows the man walking on the wing, at one point taking off his shoes and socks. (https://bit.ly/3oLplxi)

An Amazon driver in New Jersey dumped packages from his delivery vehicle – telling an officer he was “throwing his feces into the woods.” A Logan Township cop on patrol noticed a van parked on Route 130 on November 2nd. He spotted the driver, 23-year-old Desmond Gould throwing a box into the woods. After being told about the alleged doo-doo, the cop told Gould to retrieve the tossed box and realized the suspect was getting rid of undelivered packages. Eleven packages with a total value of $288.87 were recovered. Gould was allegedly hiding the items and planning to return later to retrieve them. He was charged with theft and illegal dumping. “This does not reflect the high standards we have for Delivery Service Partners,” company rep Leah Seay told NJ.com. “We take these matters seriously and can confirm this individual is no longer delivering Amazon packages.” (https://bit.ly/3oM5Rca)