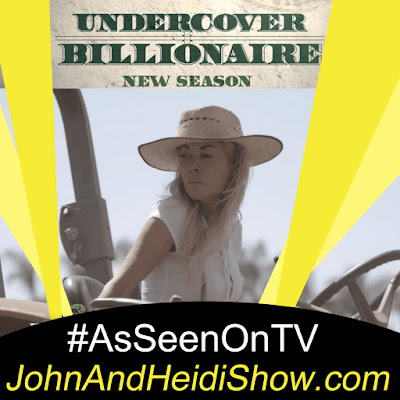 Today we visit with Elaine Culotti. She is in season two of Undercover Billionaire which airs every Wednesday at 8pm ET on Discovery Channel and streaming on Discovery+. discovery.com/shows/undercover-billionaire/

A study published in the journal “Psychopharmacology” found that cocaine use leads to unsafe sex. (https://bit.ly/38WBGsn)

According to a criminal complaint, a Pennsylvania man charged with narcotics distribution claimed to police that he did not sell methamphetamine, but instead gave it away for free to those who came to his storage unit and asked for the drug. 56-year-old Mark Hiles was arrested Saturday for allegedly selling drugs from a storage unit several blocks from his home in Altoona. Hiles, free on $50,000 bond, faces a pair of felony drug charges and three misdemeanor counts. According to police, Hiles and 25-year-old Tyler Bartley were collared after investigators found them inside Hiles’s storage unit, which “appeared to being used as a residence.” In a post-arrest interview, Hiles was asked about the foot traffic to and from his storage unit. Hiles explained that “his friends stop by to see him because they know he has methamphetamine.” “The Defendant denied selling methamphetamine for money, but stated he would provide methamphetamine to users for free when they asked.” Hiles’s rap sheet includes multiple drug convictions, for which he has served several years in state prison. (https://bit.ly/3n4ntyA)

Actor Bradley Cooper took a shot at The Oscars, saying that the awards season is “meaningless” and “devoid of artistic creation.” (https://fxn.ws/3h7eUQq)

A video has gone viral of a bulldog surfing off the coast of San Diego. (https://bit.ly/3oekkh4)

An Oklahoma man was jailed for giving his two-month-old daughter a sip of Smirnoff Ice so she’d go to bed. (https://bit.ly/3bf7zPs)

Drivers who were seen on video blocking traffic by making donuts in the center of an intersection led to more than a dozen arrests Friday night in Miami Beach. (https://nbcnews.to/3nEshvJ)

A study says sedentary lifestyles are making children less fit — even among those who are not obese.

Research shows that if you feel younger than your actual age, you’ll live longer.

They’re legumes. According to Merriam-Webster, a nut is only a nut if it’s “a hard-shelled dry fruit or seed with a separable rind or shell and interior kernel.” That means walnuts, almonds, cashews, and pistachios aren’t nuts either. They’re seeds.

A prominent Russian scientist who was working on a COVID-19 vaccine was found dead with a stab wound after plummeting out his window in St. Petersburg. Russian police say they are investigating Kagansky’s death as a possible homicide. (https://fxn.ws/38tqAuD)

A Florida man was arrested after crashing into a woman’s vehicle and claiming to be a Hillsborough County sheriff’s deputy. According to an arrest report, 26-year-old Krishna Aravinthan claimed to be a law enforcement officer to the victim and tried to stop her as she was driving. Aravinthan allegedly rammed the victim’s moving vehicle with his own. He reportedly claimed to be a Hillsborough County deputy multiple times and said he rammed her vehicle to try and “stop her crime of driving reckless.” The Hillsborough County Sheriff’s Office confirmed nobody by the name of “Krishna Aravinthan” is employed by the agency. He is now charged with falsely impersonating an officer.(https://bit.ly/2MwVTNZ)

A Fort Walton Beach woman told police she punched her neighbor’s dog because Jesus told her to do it ….. FAKE NEWS

Doctor Forgives $650,000 Worth Of Medical Debt For His Cancer Patients
https://www.sunnyskyz.com/good-news/4099/Doctor-Forgives-650-000-Worth-Of-Medical-Debt-For-His-Cancer-Patients