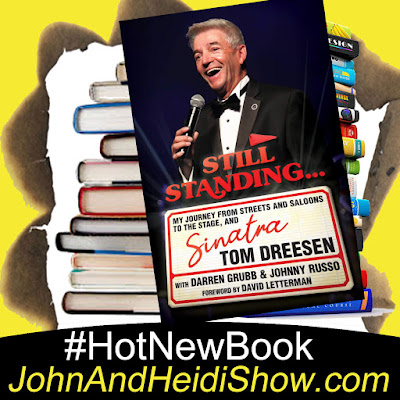 Tom Dreesen has been in show business for 50 years. Along the way, Tom has made over 500 appearances on national television as a stand-up comedian, including more than 60 appearances on The Tonight Show. He was one of David Letterman's favorite guests and frequently hosted the show in Letterman's absence. He has a new book out... Still Standing...: My Journey from Streets and Saloons to the Stage, and Sinatra. Available now - https://amzn.to/2XrLRzD

National Save The Eagles Day

A new study finds that your brain activity and your emotions will change depending on what kind of music you’re listening to. (https://bit.ly/386iCbY)

A survey called “The Federal Risk Index” named Los Angeles as the most dangerous city in the country. (https://bit.ly/2JJ4uMt)

A Florida man who wasn’t on fire is charged with a felony after police say he sprayed himself with a fire extinguisher in an attempt to dry himself. The Tallahassee Democrat reported that Florida State University police found 54-year-old David Mann in a parking garage Tuesday night with an extinguisher and covered in powder. Police say Mann told them he had been drinking, fell asleep, and then fell in water when he woke up. He said he was trying to dry himself off. Interfering with firefighter equipment is a third-degree felony. Mann was still in jail as of last week.(https://bit.ly/3pWVEdB)

Blake Shelton is facing a backlash for a line in his new song that says Gwen Stefani could make a man feel rich on minimum wage.(https://pge.sx/3hEotse)

The internet is supposed to make our lives easier, and it’s hard to argue that it hasn’t. However, a new survey of 1,000 American adults suggests that all of that convenience may be robbing an entire generation of basic home maintenance skills. In all, about two in five (38%) respondents said they are helpless and unable to fix any common household problems (patching up drywall, fixing a running toilet) without the help of the internet. Respondents were asked about their ability to fix a variety of different house problems without turning to Google for help, and while close to half (43%) said they know how to unclog a drain, only 25% know how to install a drywall anchor. Another 39% said they can stop a running toilet all by themselves, and 38% can find a stud. Additionally, 31% know how to patch a hole in a drywall, and 29% said they can replace a washer on a leaky faucet.

In Romania a man broke into a restaurant and stole $450 in cash. As he was preparing to leave, he was tempted by something he just couldn’t resist: a display of delicious pies. After stuffing himself, the 300 pound crook tried to exit through the same window through which he had entered. But that was before the pies, and he found himself stuck tight. And he was still stuck when the owner arrived the next morning to open up.

Coffee that tastes a bit off might taste a bit better if you pour it into a mug of a different color. A barista noticed customers complaining about the bitterness of coffee when drinking out of a white mug. However, when the customers drank the same coffee out of a clear cup they did not complain. This gave the barista an idea for a new study. Researchers experimented with clear, white, and blue containers and the same type of coffee. They asked participants to analyze the taste of the coffee, and the results were pretty conclusive: The brain definitely associates color with flavor. The study found that drinking from a white container tastes “significantly more intense” or less sweet than drinking from a blue or clear container.

The chemicals reduce the surface tension of plain water so it’s easier to spread and soak into objects, which is why it’s known as “wet water.”

An 82-year-old Frenchman was trying to swat a fly with an electric racket designed to kill insects, didn’t realize that a gas canister was leaking in his home, and created an explosion that destroyed his kitchen and part of his roof.(https://bit.ly/35bntYg)

Workers at an apartment complex in Russia discovered the body of a man who has been dead for years without his roommates being aware of it. The man lived in the communal complex with several other families and just wasn’t missed when he died five years ago. He was found when workers broke through the door to make repairs. Other residents say they had no clue the man was in there.

A German baker who has reportedly been selling sawdust cookies for around two decades has recently been ordered to stop, as the finely milled wood has been deemed unfit for human consumption. An administrative court in the southwestern German city of Karlsruhe has upheld a decision to ban the sale of cookies made with sawdust, despite the producer’s claim that they were a traditional vegetable product. He openly listed sawdust as an ingredient on the packaging of his biscuits, and had already written to the city of Karlsruhe about his practice back in 2004, but received no answer. Then, in 2017, a routine examination of a biscuit sample led to a sales ban which he then contested in court. The Court’s decision to ban the sale of sawdust-containing cookies is not yet legally-binding, as the baker still has the option of filing an appeal.(https://bit.ly/3hDtUYc)

A Lee County man attempted to rob a convenience store using his finger as a gun ….. FLORIDA (https://bit.ly/2MknuOh)