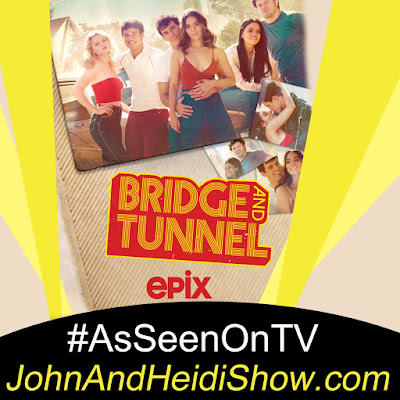 Today we visit with Brian Muller (Good Wife, The Deuce, Madam Secretary, Blue Bloods, Chicago PD and more) Brian stars in Bridge and Tunnel, the highly anticipated new dramedy series from actor/director Ed Burns (Saving Private Ryan, The Brothers McMullen, She’s the One). Set in 1980, the show revolves around a group of recent college grads setting out to pursue their dreams in Manhattan while still clinging to the familiarity of their working-class Long Island hometown. Brian joins a stellar ensemble cast that includes Ed Burns, who also co-stars.

Premieres this Sunday, January 24th only on EPIX https://www.epix.com/

A study by the Ohio State University found that artificial sweeteners do not cause diabetes. (https://bit.ly/3bBSBDq)

A North Dakota man on probation for narcotics possession was wearing a “Don’t Do Drugs” T-shirt when he was arrested for methamphetamine possession. 40-year-old Esequiel Robles was collared following a traffic stop in Williston. According to a probable cause affidavit filed in District Court, a search of his vehicle turned up a baggie containing meth and a spoon with meth residue. Charged with narcotics possession and possession of drug paraphernalia, Robles was booked into the Williams County jail. Robles was convicted in late-2019 for meth possession and was sentenced to three years in prison and placed on two years’ probation upon his departure from custody. He is scheduled for a bond hearing on January 20th and a preliminary hearing on February 17th. (https://bit.ly/2NgUXhb)

Bruce Willis was asked to leave a Los Angeles Rite Aide on Monday for refusing to wear a mask. He had a bandana around his neck and he wasn’t yelling or anything. (https://pge.sx/2LNghKo)

Azalea Banks dug up her dead cat Lucifer on Instagram and boiled its bones in an effort to bring it back to life. (https://bit.ly/38GfHa5)

Canadian Fashion Designer Peter Nygard is the target of an FBI Investigation after the 79-year-old Icon was accused of sexually assaulting dozens of models. (https://bit.ly/3oS55La)

The Church of Satan in upstate New York is reeling after an arsonist set fire to one of its buildings. Police believe it could have been the Priest’s ex-girlfriend. https://bit.ly/3nQnZjZ

The world-famous “Hacienda Sex Club” in Brooklyn is struggling to keep its doors open during the pandemic. (https://bit.ly/3oO44Uh)

The LAPD busted up a swinger’s party over the weekend that turned out to be a super-spreader event. (https://bit.ly/39tCMft)

Pineapple works as a natural meat tenderizer. The fruit is packed with the enzyme bromelain, which breaks down protein chains, making it an ideal marinade for meats when you don't have a lot of time. But for the same reason, pineapple does not work for jams or jellies, since the enzyme breaks down gelatin as well. The bromelain is so strong that pineapple processors have to wear protective gloves, otherwise over time the enzyme eats away at the skin on their face and hands, leaving dry skin and small sores.

A Lincolnshire woman in her 30s has been fined by police for driving through three counties to get a McDonald’s meal with her sister in Scarborough. North Yorkshire Police in England fined the woman after the non-essential 100-mile trip to get a burger. This comes after the force said it had issued 107 fixed penalty notices for breaches of the coronavirus regulations since the new national lockdown commenced on January 6th this year. Chief Inspector Rachel Wood of North Yorkshire Police said: “Driving through three counties to get a burger is not classed as essential travel. So, the woman, who is in her 30s, received a fixed penalty from North Yorkshire Police.” She added, “When this pandemic is over, we know everyone’s looking forward to going where they want, when they want. But in the meantime, I’d like to say thank you to everyone who continues to stay home, protect the NHS and save lives.” https://bit.ly/3nFbjMR

A convicted man from Texas has been sentenced to prison for conspiring to fraudulently obtain free Spirit Airlines flights for himself and others, as well as making fake employee identification badges in order to get the flights. The defendant, identified as 32-year-old Hubbard Bell from Houston, had previously worked for Mesa Airlines, which gives its employees free tickets for Spirit Airlines flights as a perk. However, Bell was terminated from his job at Mesa in 2015. From February 2016 to November 2017, Bell reportedly worked with several other people to allegedly sell “stolen and unauthorized information of Mesa employees,” which would allow them to book free flights. Bell also reportedly "unlawfully used his Mesa employee information" to book 34 free Spirit Airlines flights for himself. Overall, Bell’s scheme led to a total of 1,953 free flights for people who were not Mesa employees. (https://fxn.ws/2ML0ZWO)