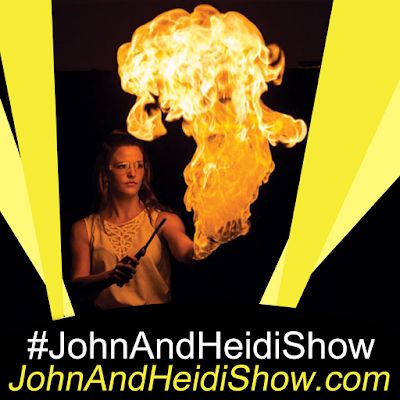 Today we visit with Kate The Chemist about:

And her upcoming book about EDIBLE EXPERIMENTS https://amzn.to/2KTNN1i

A new study found that a “stuffed animal sleepover” may help your child learn to read. The study was based on a program in which kids leave their stuffed animals in a library overnight to spark interest in reading. (https://bit.ly/2NyQGpp)

A study from the University of Chicago found that people who experience higher levels of pleasure when drinking are more likely to become alcoholics.(https://bit.ly/2NtmFal)

According to the Jackson County Sheriff’s Office, after falling asleep at the wheel with a beer can in her hand, a Greenwood woman almost rolled her truck into a ditch. 35-year-old Erica Nicole Cobb was later charged with a DUI. Early Sunday morning, officers were dispatched to a suspicious vehicle parked in the middle of Highway 71. Upon arrival, deputies found a Dodge pickup truck roadway with the engine running. “Deputies attempted to make contact with the single occupant, who was seated behind the wheel, passed out and holding a beer can,” a Jackson County Sheriff’s Office release stated. “After being awoken by the deputies, the driver removed her foot from the brake pedal and the truck began rolling at a slow pace down the roadway.” One of the deputies continued to run alongside the truck beating on the window and giving commands for the driver to put the vehicle in park. The truck continued to travel toward a ditch before the driver corrected the course of direction and traveled alongside the roadway narrowly missing several mail boxes and a pole. Deputies had Cobb perform field sobriety exercises and she was arrested for driving under the influence based of deputies’ evaluations. https://bit.ly/2LPNHIz

Ellen DeGeneres was seen carrying a notebook with her Pixar Character, “Dory,” sparking rumors she could be working on another “Finding Dory” movie. (https://www.dailymail.co.uk/

Mary Kate Olsen and Olivier Sarkozy have been granted a divorce after five years of marriage. Olsen was 34 and Sarkozy was 51. (https://www.dailymail.co.uk/

An Ohio High School Teacher who was regularly having sex with a male student before school has been sentenced to two years in prison. (https://bit.ly/39gzSff)

Florida is offering to host the Summer Olympics if Tokyo backs out. (https://yhoo.it/2M7o5XF)

A Canadian Casino Mogul and his actress wife got caught posing as Motel Workers so they could cut the vaccine line. (https://bit.ly/3pkCAWt)

A giraffe can clean its ears with its 21-inch tongue!

Three thousand people were arrested at massive Russian protests demanding the release of Alexei Navalny, who is Vladimir Putin’s most vocal critic.(https://bit.ly/3a5PG3M)

Police say that at least four people were taken into custody early Tuesday after gunfire erupted at a strip club and the suspects crashed their cars on Interstate 275. Officers were called for a disturbance at the Truth Lounge as the club was closing about 2:27 a.m. People in a number of vehicles fired guns from their cars and sped away from the scene. Officers spotted a white Mercedes, white Dodge Charger, and a silver Lexus speeding south on Interstate 275, but did not pursue them. About 2:32 a.m., the Mercedes and Charger crashed at the Interstate 4 interchange. Police said both drivers were taken into custody and guns were recovered from both vehicles. The Lexus continued east on I-4 and was tracked by a police helicopter. Officers were able to stop the car in Plant City and took the driver and a passenger into custody. Guns were also recovered from the Lexus. (https://bit.ly/2LJVdEI)

New York Police said a man accidentally set himself on fire early Tuesday while lighting a cigarette inside his Washington Heights home. The 59-year-old victim was lighting up inside the bathroom of his W. 173rd St. apartment near Audubon Ave. around 4:00 a.m. when the match fell onto his clothes and set them on fire, cops said. He suffered serious burns to parts of his body before the flames were extinguished, police said. Medics took the victim, who was conscious and talking, to Harlem Hospital. (https://bit.ly/2Y06IKL)

An Orlando landlord is under fire for keeping a pet alligator in a communal swimming pool. FAKE NEWS