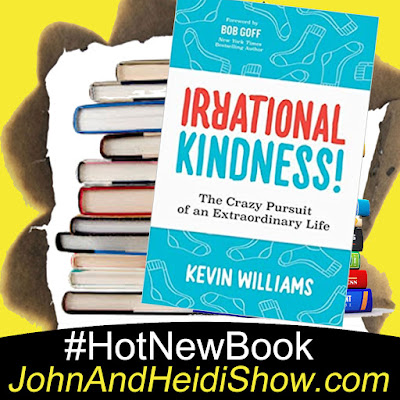 Kevin Williams, a rare triple-franchisee of Chick-Fil-A wrote Irrational Kindness: The Crazy Pursuit of an Extraordinary Life (January 2021) as both an operating manual for life and an employee handbook for his Chick-Fil-A staff, encouraging us all to practice kindness in a big way. https://amzn.to/2YveAUP

A group of scientists believe that cats and dogs will need to be vaccinated to stop the spread of the coronavirus. (https://bit.ly/2NsTiVB)

San Leandro police arrested a man during a traffic stop after they found an “It” clown mask, marijuana, and a gun in the car. Police said they made the stop around 12:05 p.m. on Sunday in San Leandro. While searching the vehicle, an officer found a fully loaded AR-15 hidden in a bag in the backseat. The AR-15 had a 50 round drum magazine with one bullet in the chamber. The suspect was arrested and booked on multiple drug and weapon violations. “This was a great traffic stop that took an illegal and dangerous weapon off the street,” San Leandro police wrote on Twitter. “This is another positive outcome in keeping the citizens of San Leandro safe.” (https://abc7ne.ws/3sHfdIT)

WGN America is changing its name to “NewsNation” to compete with CNN, FOX, and MSNBC. NewsNation says it will report the news without a bias or an opinion. (https://yhoo.it/3iQtNZS)

Spanish born actress Charo says the Hilaria Baldwin scandal is funny. Hilaria was caught over Christmas Break for claiming to be Spanish when she really wasn’t. (https://pge.sx/2NHfMm9)

Gamestop’s stock has shot up by 93% this week as REDDIT investors battle with hedge fund managers who've tried to short the stock. (https://bit.ly/3t1TdIJ)

Failing to make your bed in the morning may actually help keep you healthy, scientists believe. Research suggests that while an unmade bed may look scruffy it is also unappealing to house dust mites thought to cause asthma and other allergies. A (Kingston University) study discovered the bugs cannot survive in the warm, dry conditions found in an unmade bed. The average bed could be home to up to 1.5 million house dust mites. The bugs, which are less than a millimeter long, feed on scales of human skin and produce allergens which are easily inhaled during sleep. The warm, damp conditions created in an occupied bed are ideal for the creatures, but they are less likely to thrive when moisture is in shorter supply.

In the UK a guy stole a car battery. To remove his DNA from the crime scene he sprayed a fire extinguisher at the car’s engine. This did not remove his DNA. A few years ago the same guy left a soft drink can behind after swigging it during a business burglary. The can had his fingerprints on it.

A New Mexico man is facing federal charges for holding up a mail carrier at gunpoint. According to court documents, the carrier was delivering mail late last month when an armed man came up and forced him to hand over the keys to the mail truck. He made off with mail and packages. The carrier says he could see what looked like more mail already in the man’s car. Postal Investigators have identified that man as 20-year-old Cisco Casaus-Alires. He is facing federal charges of assault on a mail carrier and mail theft. It comes on the heels of a number of local mail carrier robberies in recent months including one just a few days earlier. It’s not clear whether any of the robberies are related.(https://bit.ly/2NpSoJD)

An angry McDonald’s customer called the police after missing out on breakfast when she got stuck in a line at the drive-thru. The woman was left fuming when she arrived at the window minutes after the 11:00 a.m. cut-off, to find out breakfast was no longer being served at the branch in East Grinstead, West Sussex. She called the police around 11.30 to complain how it was “unfair” that staff had refused to serve her a McMuffin meal. But unimpressed officers weren’t having any of it, and warned her it was “not a police matter.” Mid Sussex Neighborhood Policing Inspector, Darren Taylor, revealed the incident on Twitter. He said: “A call @11.30 this morning from an angry lady who stated due to the queue at the McDonald’s drive-thru in EG, by the time she got to the window the breakfast service had stopped and she couldn’t order a breakfast. The lady was given words of advice about ringing the police.” (https://bit.ly/2MeGCkF)

A Florida woman accidentally destroyed an entire new home that was under construction when she backed into the job-site and snagged an extention cord that hooked onto her bumper, then she pulled away and yanked the cord and knocked down the walls. FAKE NEWS