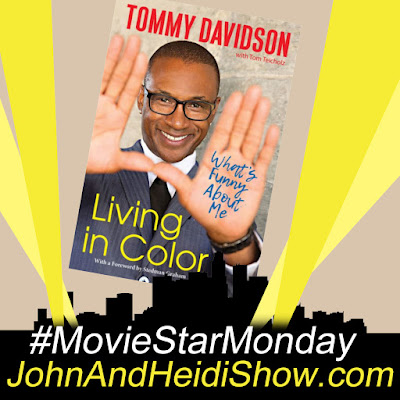 It's a #MovieStarMonday with Tommy Davidson from In Living Color, Ace Ventura 2, Sharknado 4 and much more! We'll chat about his amazing career and his new book “Living In Color” available now - https://amzn.to/3bkkeRy
Also available in paperback in Walmart & Target on January 26th

A study says sedentary lifestyles are making children less fit — even among those who are not obese.

A study by the Georgia Institute of Technology found that people who Tweet positive messages are more likely to follow a diet because they’re more future oriented than people who Tweet negative things. (https://bit.ly/3b8tZBV)

Okaloosa County deputies report that a Crestview, Florida, man was arrested for allegedly setting his truck on fire Friday night. 28-year-old Kevin Robert Murphy is charged with arson, possession of methamphetamine, and possession of drug paraphernalia. The Okaloosa County Sheriff's Office, also known as the “OCSO,” says they responded to reports of a loud boom and found a Chevy Silverado truck fully engulfed in flames. When talking with Murphy, OCSO says he told deputies he poured gas onto and into the truck and set it on fire. He added he started the fire “to give us [sheriff’s office] something to do” and to give himself an extra Christmas present. While being arrested, deputies found methamphetamine and drug paraphernalia in Murphy's possession. No injuries were reported, but a nearby vehicle and building suffered minor damage. The Fire Department quickly arrived and put out the fire. (https://bit.ly/2L14s39)

Most corporate offices don’t condone drinking on the job, but a case may be made for reconsideration. As it turns out, a little bit of alcohol really can support creative thinking. Researchers (University of Illinois at Chicago) found that a certain level of inebriation can help get the creative juices flowing. In the study, participants whose blood alcohol level (BAC) was slightly under .08 performed better in a creative task than did their sober counterparts. The intoxicated group, however, underperformed when they were assigned memory tasks. The researchers determined that a person’s “creative peak” is reached when the person hits a BAC of .075 percent.

There is a direct link between larger wine glasses and increased wine consumption. Researchers (University of Cambridge) set out studying drinkers at a pub to see whether serving wine in bigger glasses lead to them imbibing more. Over the course of the 16-week study, bar staff switched out smaller glasses with three larger sizes. The researchers believe customers may have been drinking more as their perception of how much they were drinking was skewed by the larger glasses. Their reaction was to order more and drink faster.

A study (Cornell University) found that most of us think we’re better than we really are and that most of us are fooling ourselves. The study found that while many of us overestimate our own good qualities, we’re pretty good at judging the lack of those qualities in others. Students were asked to predict whether they would buy a flower for a charity cause. Then they were asked to predict if others would. 83 percent said they would buy a flower, but only half did. Students predicted that only 56 percent of classmates would make the donation and that number was right on the money. Researchers expected people to view their peers cynically, but instead we tend to over-inflate our own egos, thinking we’re better than we really are.

In fact, one Texas man was hospitalized when a bullet he shot at an armadillo ricocheted off the animal and hit him in the jaw.

An Austrian man named Josef Koeberl lasted more than two and a half hours in a glass box filled with ice cubes to break his own world record by thirty minutes. (https://fxn.ws/2R4Me02)

When pregnant Australian mom Lisa Leavey felt a few pains, she initially didn’t think it was anything to worry about. Already a parent to one, she thought she’d know when labor started. But things really ramped up quickly, and as Lisa was walking to the car to go to the hospital she ended up giving birth in her front yard. Twenty minutes later the paramedics arrived, surprised the baby had been delivered already. Mom and newborn baby Michael checked out okay.

North Korea routinely and adamantly claims that it has zero cases of COVID-19, but the country has nevertheless made a habit of circulating fringe or unsupported scientific theories about how the virus can spread. In recent months, the country has warned that the virus can be passed on through migratory birds, polluted dust blown over from China, cigarette smoking and more. Now, North Korea’s foreign ministry has told people to avoid playing with snow for fear of contracting COVID-19.

A Palate man was arrested after asking police to test the quality of the meth he had just purchased ….. FLORIDA (https://bit.ly/2DojjOu)

Instead Of Charging Two Women With Shoplifting, This Police Officer Paid For Their Groceries
https://www.sunnyskyz.com/good-news/4100/Instead-Of-Charging-Two-Women-With-Shoplifting-This-Police-Officer-Paid-For-Their-Groceries