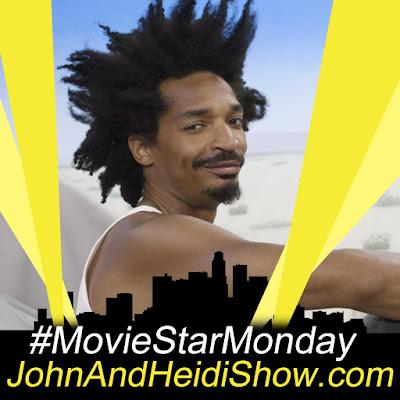 It's a #MovieStarMonday with Eddie Steeples. National recognition as the "Rubberband Man" in a series of commercials for OfficeMax catapulted his television and film career, leading to an Emmy nomination for the commercial and being named one of People Magazines’ “Sexiest Men Alive.” Steeples then played the role of Darnell Turner a.k.a. Harry Monroe a.k.a. "Crab Man" as a series regular on the hit NBC comedy series My Name Is Earl, which ran for four seasons. More recently he has been seen as a recurring guest star on Raising Hope, a lead in Jiu Jitsu alongside Nicholas Cage, and a Series Regular on Guest Book, streaming January 27 on Hulu.

National Get Up Day

A study by the University of Bristol found that common pesticides keep bees and flies up all night. (https://bit.ly/36axiW9)

While paramedics were on a call, a Texas man jumped into an ambulance and drove the vehicle, with its lights flashing, to a Jack in the Box, where he ordered food at the drive-through lane. According to Houston police, 36-year-old Renaldo Leonard was charged with felony theft in connection with the ambulance heist. Cops noted that the stolen vehicle--valued in excess of $150,000--was tracked to a Jack in the Box, where Leonard “was at the drive-up ordering food with emergency lights.” The restaurant is more than four miles from where the Houston Fire Department ambulance was stolen. Leonard is behind bars at the Harris County jail. In light of Leonard’s prior criminal record, prosecutors have asked a judge to deny him bail. According to court records, Leonard’s rap sheet includes separate felony convictions for PCP possession, robbery, and cocaine possession. (https://bit.ly/2LQhxgf)

FKA Twigs claims that Shia LaBeouf banned her from making eye contact with other men during their relationship. (https://pge.sx/3a9ztKy)

“Bachelor” Contestant Brittney Galvin is shooting down rumors that she worked as an escort. (https://bit.ly/3sSanIO)

Prince Andrew’s flagship business could be on the verge of collapse due to his ties to Jeffrey Epstein. (https://bit.ly/3ogAkhG)

Budweiser and Coca-Cola will not be advertising in this year’s Super Bowl because of COVID Concerns. (https://yhoo.it/3iVTQzc)

An 18-wheeler that was carrying over 100,000 honeybees flipped over on a San Antonio highway, unleashing an angry swarm of bees. (https://bit.ly/3qVUMWN)

The U.S. Government is exploring the idea of mandating COVID-19 testing for any form of domestic air travel. (https://tmsnrt.rs/2YhLTe6)

Ask anyone what the grossest spots in their home are and they’ll likely answer with one of the following: the toilet, the dish sponge, or the grimy stovetop. But according to a new study, your appliance handles could be even more disgusting. Researchers studied the amount of bacteria on 14 common sites in your home and found that the kitchen was the most contaminated spot. And appliance handles — like that of your oven door — were some of the worst offenders.

An ostrich’s eye is bigger than its brain

A man in England was fined for blowing his nose while his van was stopped. The guy wiped his nose with a handkerchief while stuck in traffic. But when the traffic cleared, he was pulled over by police who told him he had not been in control of his vehicle. He was fined $97.

Nostalgia, and the need to unload an old sedan, sent Adam Sidoti on the hunt for the newly released Ford Bronco Sport. “It is just a unique look, and I fell in love with it when they released it,” Sidoti said. But the day after he purchased the 2021 SUV, Sidoti said the dealership started calling and demanding he return it to the showroom. “They wanted me to bring it in by 3:00 p.m. on Christmas Eve!” he said. Sidoti’s contract showed he traded in his vehicle, put nearly $2,500 down, and obtained financing before driving off the lot December 22nd. Sidoti said he spoke to the sales manager and even wrote a letter to customer service. The dealer admitted they had accidentally sold him a demo or mannequin model that was supposed to sit on display. Luckily for him, Ford released a statement in an email: “After speaking with our team, as soon as we were made aware of this situation on December 29th, 2020, we made sure the customer is able to keep the vehicle.” (https://bit.ly/3camc7m)

A Las Vegas man allegedly stole about $2 million in federal COVID-19 relief funds meant for small businesses — all so he could buy luxury cars and homes. Jorge Abramovs has been charged with bank fraud after allegedly applying for Paycheck Protection Program funds between April and June 2020. Prosecutors charged that Abramovs used a variety of company names, including “National Investment Group Corporation,” “National Legal Advisors In Care Of,” and “National Investment Group” when applying for the aid. In one application, Abramovs claimed NIGC had eighteen employees and an average monthly payroll of $64,797. According to a federal criminal complaint obtained by the outlet, another application claimed NIGC had forty-nine employees with a payroll of $55,235. The complaint states in total, Abramovs allegedly got away with $1,986,737.46 in fraudulent PPP loans. He allegedly used those funds to purchase a 2020 Bentley Continental GT Convertible for $260,982, a 2020 Tesla, and two luxury condominiums in Las Vegas ranging in price from $225,000 to $415,000. Abramovs was ordered remanded in custody during a detention hearing on Friday. (https://bit.ly/2Y7cElp)