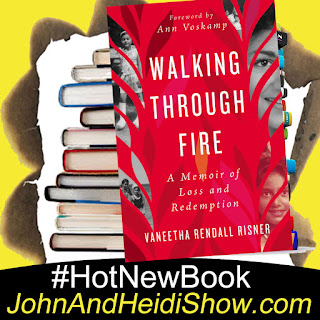 Vaneetha Rendall Risner about her new book “Walking Through Fire: A memoir of loss and redemption” AVAILABLE NOW https://amzn.to/3c2wfeq

Researchers in the European Society of Cardiology find that having half a glass of wine a day increases your chance of an irregular heartbeat. (https://bit.ly/3qkBiuL)

A Coral Reef study predicts the ocean may soon be too warm for baby sharks.(https://bit.ly/39EBgXX)

A 7-year-old boy in China was found driving a three-wheeler. With his dad on the back. His drunk, unconscious dad. The boy drove 12 miles to fetch his father, who had passed out after a heavy drinking session.

Caitlin Jenner is said to be in talks to star in the HBO Reboot of “Sex and The City.” (https://www.dailymail.co.uk/tvshowbiz/article-9156359/Caitlyn-Jenner-talks-appear-Sex-City-reboot-HBO-Max-amid-inclusivity-efforts.html)

Betty White turned 99-years-old Sunday and said COVID-19 is scared of her. The amazing thing is at her age, Betty still walks five miles a day. https://bit.ly/3oS4kSk

General Motors unveiled a flying car concept during a virtual presentation at the annual CES Show in Las Vegas. The car won’t be out for another ten to fifteen years. (https://bit.ly/3nDMWz7)

A video of a man who went on a foul-mouthed tirade after getting kicked off a flight from Charlotte to Washington, DC has gone viral. (https://bit.ly/2XEJIAN)

A Russian circus is under fire for a show that features a Nazi monkey and two goats with Swastikas. (http://dailym.ai/3bGgz0f)

You haven’t eaten for a while and you’re starting to get snappy with everyone. You’re hangry. It’s not just a joke, it’s a real phenomenon. Research has pointed to the idea that being hangry is legit. The lower your blood sugar gets, the less fuel your brain has to function. While you can handle all the critical brain tasks like breathing and seeing, more complex things like turning a bickering argument about the dishes into a constructive conversation aren’t as simple. The result? You deal with the little things more impulsively, which leads to getting angrier easier.

Goosebumps are meant to ward off predators. Why do we get goosebumps? In this physiological reaction, small muscles attached to individual body hairs contract, which leads the hair to stand on end. We inherited this ability from our ancestors in part as a way for our (then) coat of body hair to capture air beneath it and in that way retain heat. But, as George A. Bubenik, a physiologist and professor of zoology at the University of Guelph in Ontario, Canada, explained to Scientific American, it also caused our ancestors to appear bigger than they were, helping to ward off predators when they were frightened or on the defense. With modern humans having less body hair, goosebumps no longer cause us to look that much more intimidating.

According to police, an Oregon carjacker who realized there was a young kid in the vehicle circled back to scold the mom about her parenting. The bizarre episode unfolded outside a grocery store in the Portland suburb of Beaverton Saturday, after the mom left her 4-year-old in a booster seat inside the running car. According to the Oregonian, she’d left the car unlocked when she ran in to buy a gallon of milk and some meat. The thief happened to be walking by, hopped in the Honda Pilot, and took off. He apparently quickly realized he had gotten more than he bargained for. He pulled a U-turn in an adjacent parking lot and drove back to the store. Once there, the bad guy gave the mom a piece of his mind, said Beaverton police spokesman Officer Matt Henderson. “He actually lectured the mother for leaving the child in the car and threatened to call the police on her,” Henderson said. Cops said the mom grabbed her kid on the thief’s orders before he again drove off with her car. (https://bit.ly/3nWYQ7f)

Airport security caught a traveler attempting to board a plane at Washington’s National Airport last Friday with a switch-blade throwing knife. Agents confiscated the “throwing star,” but the flyer was not cited because the Japanese-style weapon is legal in the state of Virginia. “The traveler relinquished it to TSA officers at the checkpoint and went on their way to catch their flight,” TSA rep Lisa Farbstein said in an email. Farbstein called the throwing star a “routine prohibited item.” New York Port Authority police arrested a Florida-bound flyer in October 2019 after LaGuardia Airport security caught him with a “razor sharp throwing star” in his carry-on. (https://bit.ly/3oI3Rlx)

A Florida man has been making headlines by driving his army tank around the suburb of Palmetto Bay. Police have deemed it legal because the guns on the tank aren’t functional. FLORIDA (https://cbsloc.al/3oGBlAL)