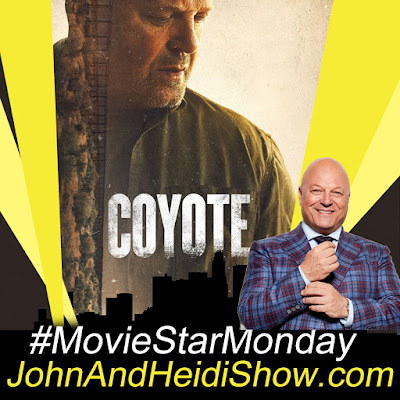 This #MovieStarMonday we visit with Michael Chiklis. Best known as Detective Vic Mackey on FX's The Shield and Commissioner Tony Scali on ABC's The Commish. He would later star as Vincent Savino in Vegas and Dell Toledo in the fourth season of American Horror Story. We'll visit about his new CBS All Access series, “Coyote” starring Michael Chiklis, Juan Pablo Raba, and Adriana Paz. The series premiered on CBS All Access on January 7th, 2021. https://www.cbs.com/shows/coyote/

A British study showed that toddlers who have a diet high in processed foods may have a slightly lower IQ in later life.

Two-thirds of office workers say they are interrupted up to 20 times a day.

22-year-old Matthew Leatham was arrested around 4:45 a.m. Sunday after he twice “called 9-1-1 to find a ride home,” according to a court complaint which notes that the accused “cursed at the call taker during the call.” Since the police emergency line does not double as a taxi dispatcher, Leatham was charged with misuse of the 9-1-1 system. He was also hit with a marijuana possession charge after a cop found some pot on him during a post-arrest search. Leatham, who works as a cook at a Port Richey seafood restaurant, was released on his own recognizance from the Pasco County jail. He was also cited last month for reckless driving following a crash that caused an estimated $8,500 in damages. https://bit.ly/39JCySX


A “Black Panther” television series is in the works at Disney+ from the movie’s writer and director Ryan Coogler. The new TV series will center on the Kingdom of Wakanda, the fictional nation in the heart of Africa. The 2018 blockbuster film brought in over a billion dollars. (https://bit.ly/3oNkTOw)

Miley Cyrus tweeted that she wants to be the wedding singer for the nuptials of her former Voice co-stars Gwen Stefani and Blake Shelton.(https://www.dailymail.co.uk/

“Southern Charm” star Madison LeCroy denied rumors she had an affair with Alex Rodriguez, saying they’ve only talked on the phone. The former Baseball star is engaged to Jennifer Lopez. (https://pge.sx/3rmBo5z)

Three escaped pigs in Russia went into a supermarket, knocked over a booze bottle and started drinking.

A 9-year-old was caught driving in Italy. A couple of friends were in the car with him.

Trees are incredibly smart. They run on sunshine, provide shade in summer and ever so kindly drop their leaves to allow the winter sun through. Researchers (University of Exeter) determined that they are good for our mental health, too. Londoners who had more trees on their street popped fewer antidepressant pills.


Once you take possession of your hot, crispy order of McDonald’s french fries, how long do you have to consume them so that the last fry is almost as good as the first? TheTakeout.com decided to figure this out. The big takeaway: the first five minutes = the sweet spot. From 6 to 9 minute the McDonald’s fries are still “good”. A marked decrease in enjoyment begins at around minute nine and is in full effect by minute 11. And after minute 13 you might was well toss what fries you have left.

Spaghetti is the favorite pasta shape, with 38 percent favoring it over other pasta shapes. The second favorite shape is Elbow macaroni, at 16 percent.

Turkish authorities are investigating the appearance of a mysterious monolith in southeastern Turkey. The metal block was found by a farmer on Friday with old Turkic script that reads “Look at the sky, see the moon.” The monolith, about 10 feet, was discovered near a UNESCO World Heritage site (Gobekli Tepe) which has megalithic structures dating as far back as 10,000 years. Other mysterious monoliths have popped up and some have disappeared in numerous countries in recent months.

A man who became stranded for a week during heavy snow in the backcountry of California’s Sierra Nevada mountains was rescued alive after surviving on a small supply of food and melted snow. 29-year-old Harland Earls was traveling for a birthday party on January 24, a drive that would typically take less than two hours, when a heavy snowstorm shut down Interstate 80. Seeking an alternate route, Earls turned to his GPS. The device didn’t account for the alternate route being an unplowed mountain pass and Earls ended up being stuck for days in snow so deep he was unable turn his vehicle around. As the local sheriff put it: “The GPS doesn’t know if there’s six feet of snow on a road or if the road is clear and passable.” Stuck and unable to obtain a cell phone signal, Earls tried tying small branches to the tires of his pickup truck to gain some traction. In the process, his cell phone got wet and stopped working. The resourceful man found some dry spaghetti noodles and handwarmer packets in his truck, and popped them into a Ziploc bag with his phone. It took three days, but the phone finally dried out enough to for him to charge it and make a call. But finding cell service wasn’t as easy. While Earls survived on two cans of beans, some sausages and a few pieces of stale, moldy bread, the man’s family reported him missing and assembled search parties to hunt for him. Law enforcement was alerted and various agencies were on the lookout for Earls and his pickup truck. Earls’ pickup truck had a camper that provided some shelter and he had winter clothing and some propane for a camp stove, which he used to make a fire and melt snow. He tried hiking out a few times, but couldn’t make it far enough to find a cell phone signal as he kept sinking into the deep snow. He had now been stuck for seven days when, on Sunday, he took his 50 percent charged phone and hiked as high as he could to get a signal. A California Highway Patrol helicopter was launched and the crew located him almost immediately.

A man Boston man is warning people against using headphones while falling asleep after health care workers had to remove a wireless earbud from his esophagus. Brad Gauthier, who detailed his bizarre experience in a Facebook post, went to bed last Monday listening to music. He woke up Tuesday, shoveled snow for about an hour, and then went inside to take a sip of water. But the liquid wouldn’t go down, and he had to lean over to drain it from his throat. Gauthier also noticed he was missing one of his two wireless earbuds. Gauthier’s son suggested that perhaps his father had swallowed the earbud, which is exactly what an X-ray at a local emergency clinic revealed. The small plastic device was lodged in his lower esophagus.