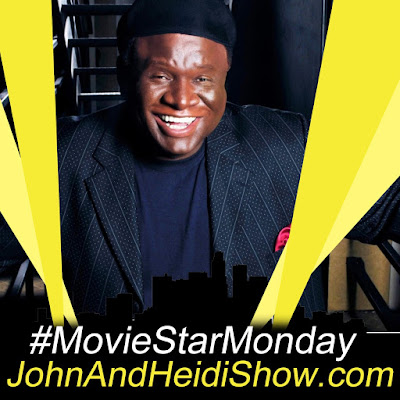 This #MovieStarMonday is also a #ComedyCall as we visit the very funny George Wallace (Mr. Deeds, Hubbie Halloween & Many More) He's been a comic for many years. The man is a LIVING LEGEND! He has a new book out right now “Bulltwit - The Online Ramblings of George Wallace”

You can find this, in addition to many other fine items at https://shop.georgewallace.net/

A new study claims people tend to speak slower when they're telling a lie. https://www.dailymail.co.uk

A Harris Poll found that 84% of Americans are experiencing anger, anxiety, or sadness. (https://bit.ly/3cQR0KS)

A policeman England spotted a car running at 70 in a 30 mph residential area and gave chase. In addition to the speeding, the driver was going the wrong way, in the dark without lights, and drunk. He was also just 13 years old, and police caught him when he lost control and crashed. A judge banned him from driving — to start when he becomes eligible for a driver’s license.

There’s a reason Yellowstone is such a popular series. Taylor Sheridan’s western series following the Dutton family is incredibly captivating, led by an iconic cast including Kevin Costner, Luke Grimes, and Kelly Reilly. Fans of the Paramount Network series can get excited because apparently, a new prequel series is in the works. A teaser debuted during the Super Bowl. The series will be titled Y: 1883 and will follow the Dutton family’s origin story when they first travel across the Great Plains to settle down in Montana. According to a press release, the new show will be “a stark retelling of Western expansion” and the Duttons settling down in an untouched area of America.

Anyone who’s taken public transportation knows that whatever gets left behind is often gone forever. Except, apparently, a $22,000 gold and silver flute. Donald Rabin is once again holding — and playing — the flute left to him by his grandmother that he forgot on a Chicago train seat when he hopped off last week. Rabin was riding a train from O’Hare International Airport during a layover before his return to the Berklee College of Music in Boston. When he got off, he realized he’d left behind his flute. He said he rode the train for hours in hopes of finding the flute. When he came up empty, he reported the missing instrument to police and took to social media to tell people about what happened. A comment on Facebook about the flute said that it had showed up in a pawn shop. Apparently a homeless man had found it and used it as collateral for a $550 loan.

British police said no one was injured when a group of teens threw items at one another during a street fight. Police said the brawl involved about multiple youths armed with chains, a bike, a shopping cart, a metal kitchen sink, and other items.

Grandparents can pass along powerful life lessons to the next generation. One man is trying to do just that by teaching his grandchildren that it’s never too late to make amends. Last week the Los Angeles Police Department posted on social media that it received an interesting package: a pair of handcuffs, $100 and a heartfelt letter of apology. The package was sent by a 74-year-old grandfather in San Diego County. More than 60 years ago when the man was a teen, he was at a local restaurant (Bob’s Big Boy) when he witnessed a scuffle involving an LAPD officer. He ended up with the officer’s handcuffs after they flew off and slid toward him. He picked them up, took them home and held on to them for all this time. The man wrote in the letter: “I have felt a little guilty each time I saw the hand cuffs over the years, but did nothing about it.” Recently, his grandsons — ages 6 and 9 — visited him and were playing with plastic handcuffs. That’s when the grandfather showed him the handcuffs he had and shared the story of how he got them. They were surprised and asked why their grandpa stole the handcuffs. The man says he had no good explanation and admitted it was the wrong thing to do. Feeling guilty, he sent back the handcuffs to the LAPD, along with the donation and the apology that LAPD later posted on social media.

The Pig Stand restaurant in Los Angeles was the first eatery in the world with curbside pick-up. The year was 1931 and the Pig Stand actually had a door you drove up to. Someone would come out and hand you your food. It was a door, but sort of a drive-thru. Jack in the Box introduced a true drive-through window in 1951.

An aerobics instructor in Myanmar has gone viral after filming herself dancing without realizing a military coup was happening behind her.(https://bit.ly/36D7wtZ)

Police arrested a woman who had been shopping with five kids for theft after she went through a self-service checkout register and failed to pay for sixteen of the approximately thirty items in her shopping cart. The woman told police she might have forgotten to scan some of the items. She blamed the children, who she said were running around, for making things chaotic and distracting her. Police said the items she failed to scan totaled more than $66. (https://bit.ly/2YZdbGi)

Would you be surprised if Dirty Harry was in your town? He’s not the real Clint Eastwood, but a Bokeelia man allegedly pointed a gun at his neighbor just like the famed actor. 67-year-old Stephen Beining pulled a gun after he taped a not-so-friendly note to his neighbor’s door at Tropical Waters RV Resort. When his neighbor confronted Beining on Friday evening, things escalated to Beining pulling a gun, in what the victim calls, “Clint Eastwood style.” Before a gun was ever pulled, Beining posted a note saying “Muzzle your dog, don’t be a moron!” to a neighbor’s door. When deputies arrived, they surrounded Beining’s motorhome. Deputies ordered him to come out. When he did, Beining was arrested. He’s facing charges of aggravated assault with a deadly weapon. His neighbor, Jeff Johnston, wants the craziness to stop and he wants Beining gone. “I’ll say he got what he deserved. Arrested. Hopefully he no longer lives here,” Johnston said. (https://bit.ly/2MFfXy9)