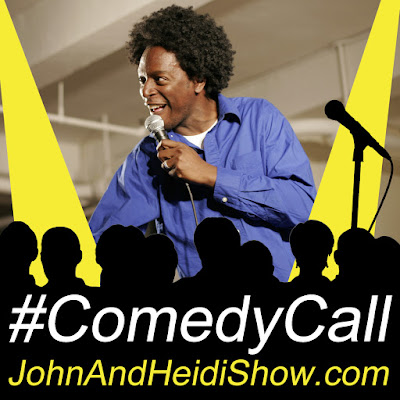 Today we have a #ComedyCall with the very funny Dean Edwards. (SNL & much more) He's featured in the second season of the Emmy-nominated stand-up comedy series, Tiffany Haddish Presents: They Ready which premiered February 2, 2021. https://www.netflix.com/title/81002933

A new study claims that green tea may be the key to fighting cancer. (https://bit.ly/3pkF2vs)

A One Poll survey found that American couples are running out of date night ideas during quarantine. (https://bit.ly/37ejmuV)

Police in Port McNeill, British Columbia, Canada, caught an alleged drunk driver and posted about him on their Facebook page. Cops say the man “provided breathalyzer samples in excess of 3.5 times the legal limit.” The reason the Facebook post was shared was that the driver “didn’t think we would breath test him” due to COVID-19. He was wrong. The man’s vehicle was impounded, his license was revoked, and he is facing criminal charges.

Suzanne Summers was interrupted on a Facebook Live Broadcast by a naked intruder who entered her home. (https://www.dailymail.co.uk/

Disney has a new animated film “Raya and the Last Dragon”. Their ad seen during Super Bowl showcased new footage from the family adventure. (https://www.dailymail.co.uk/

A Florida man’s mugshot has gone viral because he has a tattoo of the state of Florida on his face. He’s only 22. (https://bit.ly/3oTunaZ)

A Harvard Professor claims that an alien space craft visited earth in 2017 to scout our planet on behalf of another civilization. (https://bit.ly/2YTvH2R)

McDonald's is testing a new app that will reward loyal customers with free food. (https://bit.ly/2N5bJzJ)

The Key West Airport has unveiled an autonomous robot with a high intensity coronavirus-disinfecting light. (https://bit.ly/3p6FBbY)

A wild new video shows a massive brawl between teenagers break out at an Illinois trampoline park. (https://bit.ly/2Z0xQtM)

A Florida man avoided jail time after being busted last week for throwing a rock through the window of a Wendy’s because they stopped serving CINNABON. (https://bit.ly/37h8Oeu)

A 275-foot Japanese submarine collided with a commercial ship about thirty-one miles off the coast of the southwestern part of the country. Three in the sub’s crew suffered minor injured and the ship is not believed to have been damaged.(https://fxn.ws/3p5qBLu)

The Volusia County Sheriff's Office is searching for a man they say stole an engagement ring and wedding bands from his girlfriend in Orange City and used them to propose to his other girlfriend in Orlando. Deputies say 48-year-old Joseph L. Davis went by “Joe Brown” with one girlfriend and “Marcus Brown” with the other. He is now wanted on a felony charge of grand theft. Both women say they met him on the dating app 'OKCupid' in 2015 and 2016. Deputies say the Orange City woman came to them after finding out Davis was engaged to another woman and discovering that he had stolen rings from her that belonged to her grandmother. According to the Sheriff's Office, Davis reportedly has a record as a convicted felon out of Oregon and North Carolina. https://bit.ly/3qkx9HR

A funeral home van with a body inside was stolen in Missouri last Thursday morning when the driver went into a convenience store and left it running. According to the St. Louis County Police Department, the vehicle was taken from the parking lot of a QuikTrip around 10:00 a.m. in St. Louis County. The driver left the white 2012 Nissan NV1500 van running, and then the suspects hopped in and drove away. The St. Louis Post-Dispatch reported that the body of a woman was inside the vehicle during the theft. Cops released surveillance photos of two suspects — a man and a woman — who they believe stole the van. Police say “William C Harris Funeral” was displayed on the side of the van and it had a green wreath with an “H” inside of them on the back.(https://bit.ly/2Ou6Hx8)

Alex Trebek's Wardrobe Has Been Donated To The Homeless
https://www.sunnyskyz.com/good-news