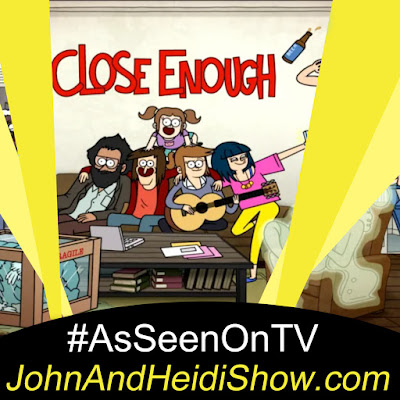 Today we visit with JG Quintel, Creator of The Regular Show, about his NEW program on HBO Max. The Adult Animation Series CLOSE ENOUGH
https://www.youtube.com/watch?v=3sfQehgUUFQ

Do you ever catch yourself getting a bit too heated when “hanger” strikes? According to a survey, hanger leads to an average of four arguments per week. From waiting too long to eat to not eating enough — respondents even felt hanger strike because they didn’t like what they were eating.

Do you feel a bit foggy in the dead of winter? It’s not just the cold weather getting you down. According to a study, the season may have an effect on how your brain works. Researchers (University of Liège) found that brain activity while performing a set of tasks differed at certain times of the year. The researchers found that brain activity while performing sustained-attention tasks peaked during the summer and dipped during the winter. And when it came to memory, the most brain activity was in the autumn and the least was in the spring.

Police have admitted they were startled to find two sheep at an illegal drinking party in Lancashire. Officers said they “discovered a full bar set-up” at a drinking den in Bacup, “but the most bizarre find was the presence of two surprised sheep.” Ten people were fined after the gathering. In a social media post, Sgt Gary Hennighan said: “The obvious line is that the wool wasn't pulled over our eyes.” Lancashire Police said that those fined were “found to be highly intoxicated” in the venue at an industrial unit. They also discovered a snooker table, table football, and large TV at the premises. Sgt Hennighan said: “In all seriousness, this was an extremely selfish thing to do. I appreciate people want to socialize and see friends again but there is no excuse for this.” Under government rules, it is illegal to meet socially with people indoors during lockdown, unless they are part of your household or support bubble.(https://bbc.in/36WkPWi)


The Chris Noth Character, Mr. Big, will not appear in the “Sex and the City” sequel, which is set to begin filming in New York. (https://bit.ly/37xIvR6)

A new no-gambling hotel is opening in Las Vegas that will be centered on fitness. (https://bit.ly/3pp1qnx)

A monkey was caught by a professional catcher in India after frustrated locals complained it had been stealing food and tearing up pillows for six months. The monkey was arrested and put in a cage and is now set for a new life in the countryside.

Your grandma probably has hundreds of old wives’ tales on how you can make sure you give birth to a girl. But science might have a better tip: eat ice cream. A study, which looked at the births of 32 couples, found that eating ice cream — or foods “low in potassium and sodium but high in calcium and magnesium,” like ice cream — led women to have more girls.

Two seniors in the UK are proving that social media isn’t just for youngsters after blowing up Instagram with their hilarious home movies. Geoffrey Walker’s account has 354,000 followers. He’s 90. Geoffrey and his wife Pauline regularly post charming video updates featuring everything from quilting to baking cakes. https://www.instagram.com/geoffreywalk/

There’s an item people wear each day that is filled with filth. It’s popular, it’s trendy and some consider it to be the most vital accessory they own. In other words, many folks can’t without it. The smartwatch has caught on like wildfire in recent years, as technology continues to dominate everyday life. But do you clean it? Do you wipe it down after workouts? Or hot weather? Or after you’ve been sick? A study by Florida Atlantic University tested 20 different watches made from different materials. They found all kinds of bacteria — some that definitely don’t belong.

In Hungary, an ice-skater who fell through the ice and into a freezing lake managed to survive by holding on to the edge of the ice with her teeth for ten minutes. She had to use her teeth because hands were stiff from the cold.

A Ukrainian man reported a fictitious murder in the hope that police would clear his snow-covered road when they came to arrest him. The man called police on Saturday evening to tell them he had killed his mother's partner by stabbing him in the chest. "But at the same time he immediately warned the police that they should come to him along with a snow plough, because there is no other way to get to him," A police spokeswoman stated. She said officers did not take a snow plough and were able to get to the man's house in an SUV. "Immediately after arriving, they discovered that the relative was indeed at the house, but in one piece and unharmed -- no one had attacked him," she said, adding that the would-be killer immediately confessed to making a fake call. Kovtun said municipal services had ploughed the road earlier on Saturday but he "was not satisfied with the quality of the clearing". He now faces fines for “reporting a false complaint.” (https://bit.ly/3anywzF)

A teacher in Central Florida found herself behind bars after police say she fought a group of students outside a fast-food restaurant following a high school basketball game. The incident took place in Bartow, where a group of students were involved in an altercation at the game. Afterwards, the group went to an area McDonald’s to eat. At the restaurant, Liquindella Clark - a teacher in Polk County and the mother of another teen who was allegedly involved in the first altercation at the school - approached the group and began arguing with them. Clark was removed from the restaurant, but waited in the parking lot and allegedly began to physically fight the group. Police say Clark struck one student in the face, removed her wig, and struck a second student in the head. Witnesses called police, who arrived and arrested Clark. She faces charges of child abuse in the case. Officials have not said if she will be suspended from her teaching position pending an investigation. (https://bit.ly/3u5pyyP)