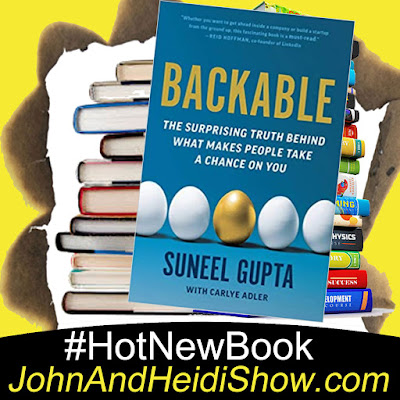 Today we visit with author Suneel Gupta about his new book BACKABLE: The Surprising Truth About What Makes Someone Take a Chance on You
AVAILABLE NOW - https://amzn.to/3bx1RrX

A new study finds that a vegan diet could cause weaker bones. Fresh research reveals that eating a meat and dairy-free diet can result in a greater risk of broken bones. (https://bit.ly/2PL4dLF)

A new study claims singles are getting more likes on dating apps if their profiles say they’re vaccinated. (https://bit.ly/3bocm0S)

A Missouri woman arrested last month on drug and weapons charges had a small revolver hidden in her vagina that went undetected during a strip search and two pat downs. The four-inch .22 caliber firearm--fully loaded with five rounds--was discovered late last week by personnel at the Boone County Jail. The weapon was found among the personal belongings of 39-year-old Amy Natasha Wilhite who was booked into the facility on February 14th following her arrest by the Columbia Police Department. Wilhite was charged with possession of methamphetamine, resisting arrest, unlawful possession of a firearm, and possession of drug paraphernalia. An initial search of Wilhite by Columbia cops failed to locate the 4.6-ounce North American Arms revolver. A “thorough pat search” at the jail was followed by a strip search before Wilhite joined other detainees in general population. It was not until seventeen days after Wilhite’s incarceration that jailers discovered the firearm. The discovery of the gun resulted in Wilhite being charged with another felony for introducing a weapon into a correctional facility. (https://bit.ly/2MTyiYe)

Kim Kardashian, as part of her divorce from Kanye West, will keep the 15,000-square-foot Southern California mansion that the former couple purchased in 2014. Kardashian and West shelled out $20 million for the spread, located in Hidden Hills, then sank another $20 million into a massive renovation that West himself reportedly spearheaded. (https://bit.ly/3c1wepF)

New Line Cinema has officially greenlit a “Hello Kitty” movie. Described as an animated/live-action hybrid, the movie will likely bring an animated version of the popular cartoon cat into the real world, similar to the new Tom and Jerry movie. (https://bit.ly/3qjbIpO)

A man in the UK was jailed after confessing to four bank robberies, an attempted robbery, and a firearms offense. He was caught when he tried to use a taxi as a getaway vehicle, but the driver, realizing what was happening, refused to wait. The man had apparently researched his crimes in advance, downloading several online crime guides, including one titled “How to Rob a Bank.”

Real runners don’t take walking breaks, do they? Jen A. Miller, the author of Running: A Love Story, says they do. She tells the New York Times that when a friend suggested she run her first distance race by adding walk breaks, it startled her. She felt like a failure after racing in five marathons and walking for periods in four of them. Then she did her research. A study in the Journal of Science and Medicine in Sport that found those taking regular walking breaks during a race can finish at the same time as those who run the whole way. And the ones who didn’t run the whole way suffered far less wear and tear of their bodies.

A Georgia man posing as a Home Depot employee almost made off with $1,500 in merchandise from a Panama City store and is wanted in connection to thefts at two other locations. According to the Panama City Police Department, 32-year-old Dustin White was intercepted recently loading the stolen items into the back of a U-Haul trailer in the parking lot of the store. According to a news release issued by Panama City police, White wore a Home Depot employee apron “in an attempt to conceal his acts” and led officers on a brief foot chase before being detained. Police said White, of Lakeland, Georgia, also took items from the Home Depot in Panama City Beach and possibly stole from multiple Tallahassee locations in recent weeks. “In all three instances, White misrepresented himself as a Home Depot employee to facilitate the crime,” police stated. White is currently charged with grand theft, scheme to defraud, possession of methamphetamine, and resisting arrest without violence in connection to the Panama City incident only. (https://bit.ly/3t3Qb5U)

Two Philadelphians have been indicted on allegations they tried to use explosives to rob a Wawa convenience store. Sixty-five-year-old Desiree Adorno and 34-year-old Michael Fields were arrested and charged with conspiracy to use explosive devices to steal lottery tickets and money from the safe at a Wawa near the Betsy Ross Bridge in June last year. Fields was also charged with possessing an unregistered firearm. Attorney information was not listed in court documents for either Adorno or Fields. (https://bit.ly/3eh9chi)