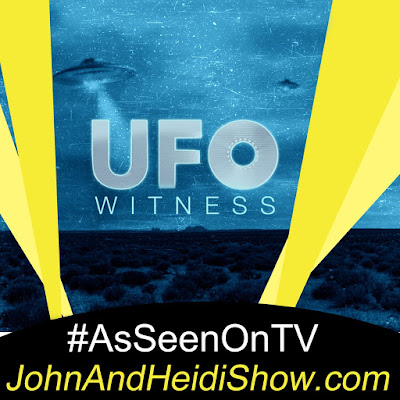 This weekend we visit with Ben Hansen, former federal special agent and paranormal investigator. He currently stars in the new discovery+ series “UFO Witness,” where he reopens case files of some of the most astounding UFO encounters in history, files that have been hidden from the public for decades. https://www.discoveryplus.com/

A new study claims that how happiness has little to do with how much money you have. Scientists explain that people in communities where there is little cash are as contented as those from rich societies. That’s because it focuses them on other values, including the beauty of nature. (https://bit.ly/38lpOke)

A new survey of 2,000 Americans shows that half of office workers are looking for a new job because of their manager. Two in three office workers (66%) believe the pandemic has negatively affected their relationship with their boss.(https://bit.ly/3cjKudo)

A Utah mother was arrested for allegedly making a video call while driving with her two young daughters in the backseat. 19-year-old Gabriella Ann McKenzie was stopped by a detective after he saw her driving erratically in Eagle Mountain just after 6:30 p.m. The detective pulled up next to McKenzie and saw she was on a video call with someone. A deputy arrived at the scene for back up, and they asked her to get her children — ages two and eight months — out of the car so they could search it. McKenzie refused but ended up taking her kids out of the car as well as a brown bag she hid in her waistband. The officers handcuffed her and confiscated the brown bag, which contained cocaine. They also found marijuana, a bottle of liquor, and other drug paraphernalia. McKenzie’s parents later arrived at the scene and took her daughters and car. The young mother was booked into jail on charges of child endangerment, possession of cocaine, marijuana, and drug paraphernalia, among others. https://bit.ly/3qjwPbm


Based on a bizarre true story, Elizabeth Banks will direct Cocaine Bear for Universal Pictures, a movie about a bear that swallows a bunch of cocaine. This movie come from Producers Phil Lord and Chris Miller, who made “The Lego Movie.” (https://bit.ly/3byJ93f)

“The Queen's Gambit” is reportedly being turned into a Broadway musical.(https://bit.ly/38rSKag)

Chipotle is launching a makeup line with the colors of their food. (https://fxn.ws/3qy1GB5)

A new report claims Amazon's Alexa could one day monitor the heartbeats of people in your house. (https://bit.ly/2OOy71a)

A Los Angeles Stuntman has set out to bring business to his favorite Mexican restaurant by sitting outside in a pool of bean dip for twenty-four hours. (https://reut.rs/3cpj7yG)

A TikTok video of a woman showing how her husband spent his extra time in quarantine creating a complete replica video rental store in his basement has gone viral. (https://bit.ly/3rONchO)

Your nostrils work one at a time. When we breathe in and out of our nose during the day, one nostril does most of the work at a time, with the duties switching every several hours. This "nasal cycle" is dictated by the same autonomic nervous system that regulates heart rate, digestion, and other unconscious bodily functions and is the reason why—when our nose gets stuffed up—it does so one nostril at a time.

A British man has broken a Guinness World Record that even he admits is “stupid” — the fastest time to drink a Capri Sun. According to Guinness, Declan Evans gulped the juice down in a record 16.65 seconds during the coronavirus lockdown last summer. (https://bit.ly/2P5NYZ1)

A Jobless son aged 41, is suing his parents in a bid to force them to pay him “maintenance” for life. Faiz Siddiqui claims he is completely dependent on his wealthy mum and dad. This is despite being a trained lawyer and having a degree from Oxford University, which he also tried to sue. For twenty years, his Dubai-based parents have let him live rent-free at a £1million flat they own near London’s Hyde Park. They also helped to cover bills and other outgoings, but want to slash their support following a family row. Mr. Siddiqui is battling in a first-of-its-kind case — which could affect the rights of every UK parent. He reckons he is entitled to claim maintenance as a “vulnerable” grown-up child due to health issues and that preventing this would be a violation of his human rights. Mum Rakshanda, 69, and dad Javed, 71, currently give him more than £400 Euros a week. Their lawyer, Justin Warshaw QC, said: “These long-suffering parents have their own view of what is suitable provision for their ‘difficult, demanding and pertinacious’ son.” Mr. Siddiqui practiced at top law firms but has been unemployed since 2011. (https://bit.ly/3qwyZVg)

A Florida woman was arrested for allegedly posing as a licensed plastic surgeon after she botched a man’s nose job. 56-year-old Alcalira Jimenez De Rodriguez was in the middle of performing another procedure on Thursday when Doral Police officers nabbed her mid-surgery. Investigators began probing Jimenez De Rodriguez last month after a former patient contacted them about his messed-up rhinoplasty. The man, identified by local outlets as Vincenzo Zurlo, said he paid $2,800 for the surgery, which had to be repeated because his nose wasn’t healing properly. Even after the second procedure, the man said his nose was still deformed. He asked Jimenez De Rodriguez for her medical license number and her medical malpractice insurance information — but she refused to give it. Investigators said they were able to confirm with the Florida Health Department that Jimenez De Rodriguez wasn’t licensed to practice medicine in the state.(https://bit.ly/3tzlFRZ)

A Mother's Tearful Message About An Act Of Kindness At Party City Launches Viral Challenge https://www.sunnyskyz.com/good-news/