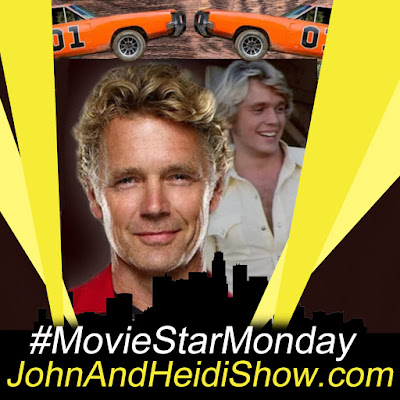 This #MovieStarMonday we visit with John Schneider (Dukes of Hazzard, Smallville, Dr Quinn Medicine Woman and MANY MORE) We will visit about his new movie “One Month Out” exclusively at www.Cineflixdod.com.

This film is based on a TRUE STORY. The film was actually recorded several years ago, then it was damaged in the big flood at John Schneider Studios in Louisiana in 2016. It's through lots of restoration work that it has been released four years later. That's a story all on its own.

We will also talk about a few other fun things John's working on!

Bo's Extravaganza April 10th and 11th at John Schneider Studios in Holden, LA. Get your tickets at https://bosextravaganza.com

At Bo's they'll be filming the sequel to STAND ON IT, the tribute film to Smokey and the Band It. The sequel is called Poker Run. Lots of stunts!

A new survey shows that 42% of Americans now consider themselves germaphobes because of the pandemic. Nearly half of Americans feel that no matter how often they wash their hands, it’s never enough during COVID-19.(https://bit.ly/3t217kH)

New research shows more Americans will reach for over-the-counter medication to treat dehydration symptoms, such as headaches, rather than drink a glass of H2O. The average person suffers two headaches, three muscle cramps, and two dizzy spells over a week’s time – all of which are symptoms of chronic dehydration. (https://bit.ly/2P1xIIC)

Well, at least he was honest? A man suspected of DUI has been arrested after crashing his van in Burien and didn't really try to hide the fact he may have had too much to drink. Deputies were called in the evening after receiving 9-1-1 calls reporting a van had smashed into several parked cars. They found the driver still there, who admitted to deputies he had just come from a local bar and also had been talking on the phone. Reeking of alcohol and failing a preliminary breath test, the driver was asked by deputies to rate his level of intoxication on a scale of 1-10 “with zero being completely sober and ten being the most intoxicated he had ever been,” deputies said. The driver rated himself as a 12. He was given a blood draw then booked into a King County jail facility for investigation of DUI. (https://bit.ly/3rrEYvE)

NBC is going to stream a new show about a man who wants to kill himself. Saturday Night Live veteran Will Forte stars in the show, which is called “Expiration Date.” (http://bit.ly/2NhKaDH)

Thieves broke into an insurance office in Ireland. Just one catch: the safe was empty. The manager of the insurance agency said the safe was “very heavy, and they did us a favor by taking it.” The agency had wanted to throw out the safe but it was too big to move.

Accused madam Ghislaine Maxwell is enduring “grotesque” conditions while behind bars in Brooklyn that “amounts to torture,” her brother complained Wednesday. (https://bit.ly/3t9TwjU)

A snorkeler found sixty-eight pounds of cocaine hidden under water in the Florida Keys. (https://bit.ly/3l2carc)

A Manhattan private school aiming to use more “inclusive language” is encouraging its students to stop using the terms “mom,” “dad” and “parents” because the words make “assumptions” about kids’ home lives. The detailed guide recommends using the terms “grown-ups,” “folks,” “family,” or “guardians” as alternatives to “mom” “dad” and “parents.” (https://bit.ly/2Omvqnt)

Only two mammals like spicy food: humans and the tree shrew. While humans have long had the rare distinction of being the only mammal that actually enjoys spicy food, that list has seen a new addition, as a study by Chinese researchers found that tree shrews have a mutation in their ion channel receptor, TRPV1, which makes it less sensitive to the "hot" chemical in chili peppers. As a result, the adorable critters happily gobbled up corn pellets laced with capsaicin (the compounds that give peppers their spice) while other mammals in the study avoided them.

A Canadian boy escaped death and injury after he slipped out of a ski lift and had to hang on as it moved up a mountain. (https://bit.ly/2P34Z66)

Police have arrested a man in Oregon for allegedly stealing $7,500 of LEGO sets, including multiple copies of 71741 NINJAGO City Gardens. On Friday morning, a bus driver spotted 40-year-old Nathaniel Nixon shifting cardboard boxes near the city of Tigard’s Washington Square Mall and informed the police. KOMO News reports that officers opened the mysterious boxes to find dozens of high-value LEGO sets. Among the models inside were LEGO Technic 42115 Lamborghini Sián FKP 37, 10273 Haunted House and 71741 NINJAGO City Gardens. Police also discovered that the locks to the local LEGO Store’s storage area had been cut, with employees confirming that several items were indeed missing. Nixon – who apparently already had an arrest warrant in a neighboring county – now faces multiple charges, including first-degree burglary, second-degree criminal mischief and possession of burglar tools. The missing sets, meanwhile, have been returned to the LEGO Store. (https://bit.ly/3eliQ2j)

A Texas man who used a loaner car from a BMW dealership to rob a bank and then tried to buy a BMW with the stolen money was sentenced to twenty years in federal prison. 50-year-old Eric Dion Warren was in the process of finalizing the purchase of a BMW in the summer of 2019 when he went into a bank, walked up to a teller, and put a bag from a fast-food restaurant and a note on the counter. The note read: “This is a f****** robbery. Play with me and die. I want $10,000 in $50 and $100 bills now you got one minute or I will kill you.” Authorities said fifteen minutes after the robbery, Warren went back to the dealership in the loaned vehicle and began waving around cash. He entered the dealership’s finance office and attempted to finalize the purchase of the BMW with $3,000 cash as a down payment. While Warren was in the dealership’s finance office, an employee received a phone call informing him of the recent bank robbery. The employee realized that the vehicle used in the bank robbery matched the vehicle the dealership had loaned to Warren and the employee alerted law enforcement. When Warren was arrested, he had more than $5,000 with him and the serial numbers matched those stolen from the bank. (https://bit.ly/3cFkBFa)

Stray Dog Walks Into Veterinary Clinic In Brazil. He Was Treated For A Cancerous Tumor https://www.sunnyskyz.com/good-news