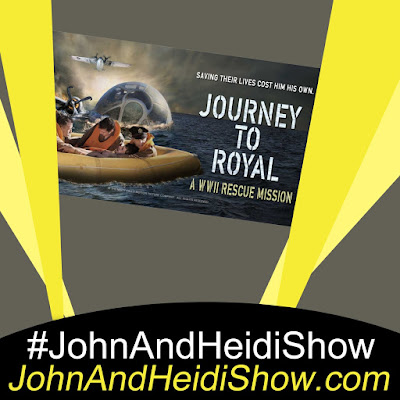 Today we visit with filmmaker Chris Johnson about his new hybrid documentary - Journey to Royal: A WWII Rescue Mission.

Filmmaker Chris Johnson is the great nephew of the title character, Lt. Royal Stratton, a WWII rescue pilot with the 4th Emergency Rescue Squadron, who lead a mission to save the lives of nine downed airmen adrift in perilous waters of a war-torn South Pacific. www.journeytoroyal.com

National I Want You to Be Happy Day

A One Poll survey found that most Americans would choose to be 36 if they could be one age for the rest of their life. The people responding to the survey said 36 is the ideal age because you’ve stopped fighting the aging process and you still feel young. (https://bit.ly/3dC8taa)

A new report claims that due to heavy rains and then a drought, Jamaica is running out of weed. (https://bit.ly/3khtvMn)

Prince Harry and Meghan Markle may have to reshoot their upcoming interview with Oprah Winfrey because the Queen stripped them of their Royal Duties after it was recorded. (https://bit.ly/3smvO3J)

French Actor Gerard Depardieu is due in court next week after being charged with Rape. (https://bit.ly/3dLdEVc)

After 139 years at 807 Franklin St. in San Francisco, a two-story Victorian house has a new address. The home was loaded onto giant dollies and moved Sunday to a location six blocks away — at 1 MPH. The house moving company had to secure permits from more than 15 city agencies. This particular move was tricky in part because the first part of the journey involved going downhill. Along the route, parking meters were ripped up, tree limbs were trimmed and traffic signs were relocated. The owner of the six-bedroom house paid about $400,000 in fees and moving costs.

A warehouse worker in the UK allegedly punched the manager who let him go from his temporary job. A prosecutor said the accused man pulled out knives and shouted to other employees, “I’ll cut you up.” Ironically the man’s job was to pack stress balls.

While snowblowers can make pretty easy work of a driveway covered in a blanket of white, they can also be quite dangerous. Government statistics show around 5,000 people (Americans) each year go to the emergency room for a snowblower injury.

In humans, the epidermal layer of skin, which consists of many layers of skin regenerates every 27 days.

A Scottish woman bit off part of a man’s tongue in a wild street brawl. And here’s the kicker -- a seagull promptly swooped down and gobbled it up.(https://bit.ly/3pBIJgs)

Police officers hurried to tackle a supposed snake in a toilet bowl in the Czech town of Milovice. What they discovered wasn’t any kind of a living animal and they quickly eliminated it with the flush button. The municipality police of the Czech town of Milovice had a rather smelly case to deal with. They received a phone call from a terrified woman telling them that she found a snake in her toilet. She blocked the toilet and waited anxiously for the officers to rescue her. The police hurried to her apartment thinking how big of a snake can fit in a toilet bowl and what would be the best technique to use for the capture. When they arrived at the scene, they carefully lifted the closed toilet lid. What they found was, by no means, a venomous snake, even though the shape of the object did share some similarity. Disgusted by the brown finding, they decided to eliminate it by flushing it to the place where such items belong. (https://bit.ly/3sev9Bf)

A Texas man has been arrested after authorities found homemade explosives in his house. 47-year-old John Christopher Crawson was busted around 8:00 a.m. after investigators searched his home in Williamson County and found several bombs. Crawson is charged with making a terroristic threat against a family member. Neighbors say he was going through a bitter divorce with his wife. Several homes in the area were evacuated as a precaution, the sheriff’s office said. The Austin Police Department’s bomb squad and the Bureau of Alcohol, Tobacco, Firearms and Explosives were also at the scene to help remove the devices. (https://bit.ly/3dCSYid)

A Gas Leak Leads Homeowner To A Hibernating Bear Raising 3 Cubs Under The House https://www.sunnyskyz.com/good-news