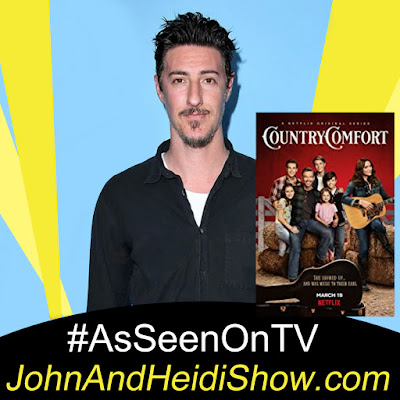 After a bad break-up, who’s the first person most people call. Can you guess? Man or woman, the person who got dumped most often calls a good female friend — 27%. Mom comes in second at 17%.

A new study conducted by McGill University finds that music can be as addictive as fast food, money, and even alcohol. Scientists explain that pleasant tunes trigger an area of the brain called the nucleus accumbens — also known as the reward center of the brain. (https://bit.ly/31VhmEu)

A Michigan man who was caught with methamphetamine gave police a fake name, but the person whose name he used had active felony warrants, so he was arrested anyway. Michigan State Police troopers said they noticed a vehicle with its lights off parked on the shoulder of M-55 near Taylor Lane in Clam Lake Township around 6:30 a.m. last Friday. A 29-year-old Cadillac woman was in the driver’s seat and a 30-year-old Lawton man was in the front passenger seat. When troopers activated their lights, the man ducked down in the passenger seat. He gave them a fake name when they spoke with him. The fake name the man used belonged to someone who had an active warrant out for his arrest, so they took the Lawton man into custody. During the arrest, troopers found about 27 grams of meth inside the man’s pants. They said they also found a scale, small baggies and cash. Several pop cans and lottery tickets were found on the ground outside the vehicle. The Lawton man was taken to the Wexford County Jail. During processing, authorities said they discovered the man had smuggled more drugs into the jail.(https://bit.ly/3sAfz3G)

A new reality show promises to send its winner into outer space. (https://bit.ly/320MNNH)

The Broadway play “The Minutes,” which is expected to resume production for the 2021-2022 season, has dropped Armie Hammer from one of the lead roles following his cannibal text controversy. (https://bit.ly/3ux4i4D)

Restaurants across America are experiencing a ketchup shortage.(https://bit.ly/39Psibp)

A video of a Guinea Pig wearing a fire fighter outfit and riding a remote-controlled toy firetruck has gone viral.(https://bit.ly/3rVk0F2)

A woman with the world's longest finger nails measuring 19-feet in length has had them cut off. (https://bit.ly/3wEudJy)

Sad news for you, Gary. You’re probably the last of a long line of men named Gary. The name is going extinct. It’s been plummeting in popularity since the early 1950s — where America saw nearly 39,000 baby Garys. The name is now ranked number 674 in America.

There are over 89 million dogs in the U.S.

Brazil is building a taller statue of Jesus Christ than the iconic one in Rio de Janeiro. (https://bit.ly/3t4t3EZ)

A 10-year-old boy from Stillwater, Minnesota found himself in hot water last week when, after his parents decided to take a nap, he stole the family minivan to stock up on Cheerios. Police tried to apprehend the boy driving the Chrysler minivan after noticing the driver was a young boy. After the police put on their emergency lights, the boy sped up to over 50 mph and “blew through a stop sign.” The cops “tracked” the car and eventually found the van after it went through an intersection in reverse and up an embankment into the front yard of a residence, where the child was apprehended. The boy then “told the officer his dad wanted him to have cereal before going to school in the morning, so he sent the boy to buy Cheerios at the store.” “The officer, thinking it was unusual, asked the boy if his father was intoxicated and the boy confirmed that to be the case.” After taking the boy home, police found sleepy but sober parents and the boy admitted his lie. The parents reported some minor damage to the side of the van but no injuries were reported. No word on the boy’s punishment. (https://bit.ly/3shLg0N)

A Connecticut woman was reportedly arrested three times in the span of 24 hours over the weekend. 32-year-old Heather Poplasky was first busted at about 6:30 p.m. Saturday when she allegedly stepped towards a victim with a large kitchen knife during a domestic argument at a Plainfield home. Poplasky also allegedly threatened to cut herself to make it appear the victim had injured her. She was charged with disorderly conduct and reckless endangerment. The woman was released on bond and sent to the hospital for observation, where she received a summons for some type of incident involving workers at the medical facility. After leaving the hospital, Poplasky allegedly violated the conditions of her release by returning to the home where the feud took place, leading to another arrest on charges including disorderly conduct and criminal trespass. Following her second arrest, she was held on $25,000 cash bail. While in custody, she’s accused of purposely flooding her cell by clogging the toilet with toilet paper and other trash. For that incident, Poplasky was charged with criminal mischief. (https://bit.ly/2QoW5R2)

The Willows in Parkersburg, Virginia ….. REHAB