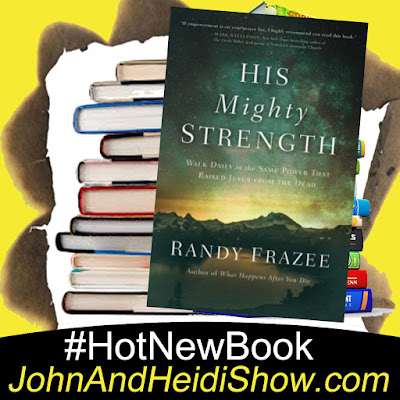 This weekend we visit with author Randy Frazee about his new book... His Mighty Strength: Walk Daily in the Same Power That Raised Jesus from the Dead AVAILABLE NOW - https://amzn.to/3svdlS4

A new study finds people who trust television and social media for COVID-19 news actually know less about the virus. Researchers at Penn State add that those who rely the most on Facebook score as the least knowledgeable about COVID. (https://bit.ly/3mIvzyd)

Researchers say that eating together at the dinner table without phones could be key to combating childhood obesity. While the Mediterranean diet has long been seen as having health benefits, researchers have found its cultural traditions of conversation and slower eating can even prevent eating disorders.(https://bit.ly/3tcOrrM)

A 32-year-old who drove his friend to a Lincoln hospital in the bucket of a front-end loader Friday night was arrested for DUI and felony theft after blocking the ambulance bay with the stolen machinery. Officer Erin Spilker said Jordan Evans had taken the $75,000 front-end loader from Sixth and Plum streets to Bryan West Campus and showed up at the hospital with a 40-year-old man in the bucket just before 11:00 p.m. last Friday. Evans was taking the man to the hospital because he was injured. Police saw a bottle of alcohol in the vehicle and believed Evans was intoxicated. The owner, Taylor Excavating, said he didn't have permission to take the loader. They arrested Evans on suspicion of felony theft, fourth-offense DUI, and driving during a 15-year license revocation. Spilker said his blood-alcohol content tested 0.184%, more than double the legal limit, at the jail. (https://bit.ly/3dl0jRz)

Kid Cudi wore a floral sundress onstage at Saturday Night Live in a tribute to Nirvana Singer Kurt Cobain, who was famously photographed in the same dress for a British Magazine a year before his suicide. Kid Cudi was trying to bring awareness to suicide prevention. (https://pge.sx/3uI6Tc1)

Honey Boo Boo confronted her mom over her drug use during the first episode of their reunion show, “Road To Redemption.” (https://pge.sx/3g2DTaI)

A Florida entertainer who calls himself the “Gator Crusader” has taught an alligator to respond to his commands only when he speaks in the voice of Macho Man Randy Savage. (https://yhoo.it/3s8MpHH)

A stylist revealed that Justin Timberlake pushed for Janet Jackson’s famous “Wardrobe Malfunction” during the Super Bowl halftime show of 2004 because he wanted to outdo the kiss between Britney Spears and Madonna at that year’s Video Music Awards. (https://pge.sx/3mOpaBX)

The total weight of ants on earth once equaled the total weight of people. Entomologists have estimated that there are at least one million trillion insects and only one percent of that number is ants, according to the BBC. And if you took all those ants (about ten thousand trillion) and put them on one side of a giant scale, you could almost put all of the people in the world onto the other and balance things out. Unfortunately, as humans have become heavier, this probably wouldn't hold up today—but it once did. Francis Ratnieks, professor of Apiculture at the University of Sussex, told the BBC this might have held true around 2,000 years ago.

Prince Andrew told British reporters that the death of Prince Philip has left a huge void in his life. (https://bit.ly/324BJ2j)

A Youtuber in England showed off his multitasking skills by solving a Rubik’s Cube while riding a unicycle and juggling with a crystal ball balanced on his head. (https://yhoo.it/3dPlvj5)

Police have busted a mattress-making factory in Maharashtra's Jalgaon district found using discarded masks, in place of cotton or other material, to stuff its products. A case has been filed against the owner of the unit with the police launching a probe into the matter. Piles of face masks were also recovered from the premises of the mattress factory. The used face masks, found lying around the premises, were set on fire as per the prescribed norms. The matter first came to light when the police station at Maharashtra Industrial Development Corporation (MIDC) in Jalgaon was alerted about the racket. Jalgaon is located about 400 kilometers northeast of Mumbai city. “When the officials visited the premises of the factory in Kusumba village of MIDC, they found a mattress being stuffed with used masks,” said Additional Superintendent of Police Chandrakant Gawali. “A case was registered against the factory owner, Amjad Ahmed Mansoori. The police are now probing the involvement of others in the racket,” said SP Gawali. (https://bit.ly/3ddX1Rv)

Four teenage girls are accused of setting fire to an unoccupied Pennsylvania house and posting footage of the inferno to Snapchat. Police used the social media post to identify and later arrest the teen suspects, ranging in age from 12 to 14, for the fire in a Ferndale duplex. The girls told police they started the blaze because “they were bored,” Ferndale Police Chief John Blake said. They allegedly used numerous aerosol sprays, including bug spray and Lysol to ignite the fire. A police officer and firefighter suffered minor injuries during the fire. Authorities said that the teens are charged with felony arson, causing catastrophe, trespassing, and endangering another person. They were released to their families. Their cases will be heard in Cambria County juvenile court.(https://bit.ly/3dZDpzs)