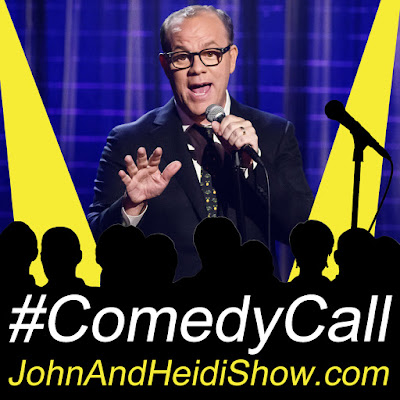 Today we have a #ComedyCall with the very funny Tom Papa http://tompapa.com/

If waking up and having a hearty breakfast every morning simply isn’t your thing, you might want to reconsider that stance. A new study suggests that your career may benefit from starting the day off with the proper nutrition. The survey of 2,000 Americans — split between 1,000 breakfast eaters and 1,000 who don’t eat breakfast — reveals that those who have a morning meal are more likely to receive a promotion at work. (https://bit.ly/394TK4k)

Miami Beach police are cracking down on rowdy spring breakers after days of out-of-control parties in the seaside city that have included violence and drunken debauchery. Mayor Dan Gelber said tens of thousands of visitors have overrun the Miami Beach Entertainment District — and the city will step up police enforcement to curtail the behavior. The city reportedly is bringing in officers from nearby Miami to help manage the situation. “If you have 50 or 100,000 people coming there and just half of 1 percent are rowdy or drunk or high to the point where they need to be controlled, it becomes a situation which is truly chaotic and unmanageable,” Gelber reportedly said in a virtual city commission meeting Wednesday. “It has felt at times like this city is under a level of siege simply from the volume of people that are coming,” Gelber said. The mayor ripped the reckless revelers, telling USA Today they “seem to have forgotten that there’s a pandemic.” Gelber claimed the city is flooded with visitors ignoring safety protocols, and worried that the maskless mayhem could lead to a spike in infections, just after they plateaued. (https://bit.ly/38WdreN)

The Oscars Producers are facing backlash over requiring nominees to attend the award show in person and not on Zoom. (https://bit.ly/31jX1Zu)

Disney+ is creating a new series about Obi-Wan Kenobi. (https://bit.ly/3fmWyOn)

A British cat’s unfaithful ways are no longer a secret after it wound up in a nearby homeowner’s real estate photos. It all started when Michael Hublank, a director of clinical genomics at a London cancer treatment hospital, decided to take a peek at his neighbor’s home on UK listing site Zoopla, Metro reports. Pictured along with the interior of the house was an orange cat throughly enjoying a sprawl on a purple bedspread. Hubank joked amid the online attention, “Typical. A decade of posting thoughtful comments about #genomics goes largely unnoticed. But you send ONE cat tweet….” As for his cat, the untroubled kitty is safe at home … for now.
https://www.wate.com/news/man-checks-neighbors-real-estate-listing-spots-his-cat-lounging-on-bed/amp/

5,000 people attended a rock concert in Barcelona on Saturday.(https://bit.ly/3svFmtR)

A pod of dolphins were spotted swimming in New York City's East River this week. (https://bit.ly/39fnRWX)

A heartwarming story out of California, as workers at an ice cream parlor in Oakland named “Fentons Creamery” received a $1,000 tip for a $63 order.(https://bit.ly/3dh6IgL)

A Florida Woman was rescued from a storm drain after she says she was living in a city sewer system for nearly three weeks. (https://fxn.ws/3u5eAbQ)

Creedence Clearwater Revival has the most No. 2 Billboard hits—without ever hitting No. 1. John Fogerty's swamp rock band has the odd distinction of having seen more of its singles hit No. 2 on the charts, without ever hitting No. 1, than any other musical act. Between March 1969 and Oct. 1970, the band scored five No. 2 singles on the Billboard Top 100—"Proud Mary," "Bad Moon Rising," "Green River," "Travelin' Band," and "Lookin' Out My Back Door"—but never saw one of its songs get to the top spot. No other act has topped this dubious honor since.


A NEWS HEADLINE... FROM SOMEWHERE IN THIS WORLD!
Brought to you by RadioTravelGroup.com

French connoisseurs are conducting tastings of wine bottles that have spent a year in outer space. (https://bit.ly/3fqc2AX)

Maybe he just wanted to let the chips fall where they may…34-year-old Joshua Karpe hopped behind the wheel of a Frito-Lay truck in Oklahoma City and took off after the driver left it stopped at a gas station and went inside. “I would love to know the motivation of stealing a truck that’s very, very easy to spot and doesn’t go very fast,” Captain Jeff Spruill of the Oklahoma City Police stated. “What do you think you’re going to do with a truck like that?” he added. The truck is emblazoned on its side with an image of a bag of Doritos Nacho Cheese flavor chips — making it easy for police to keep it in sight as they chased it through three counties. The chase went into crunch time in Enid, Oklahoma, about ninety minutes north of Oklahoma City, where Karpe allegedly sideswiped a patrol car. Deputies shot at his tires — but still he kept going. According to the Enid News & Eagle, he was eventually going so slowly that Enid officers were able to approach and simply ask Karpe to get out of the truck. He was arrested at that point without incident. (https://bit.ly/2PefSSG)

A father who allegedly carried his 2-year-old daughter into the San Diego Zoo's elephant enclosure was arrested on suspicion of child cruelty. 25-year-old Jose Navarrete was accused of entering the enclosure at about 4:20 p.m. Friday, according to Officer Tony Martinez of the San Diego Police Department. Despite multiple barriers, Navarrete illegally trespassed into a zoo habitat, home to Asian and African elephants. He allegedly climbed through two barriers to get into the enclosure. Once inside, an elephant noticed the intruders and started moving toward them. As he was trying to climb back out, the father dropped the girl, but he picked her up and escaped the enclosure as the elephant was trotting toward them. Zoo security officers called the police, who arrived and eventually arrested the father on suspicion of child cruelty. Navarrete was booked into the San Diego Central Jail on Friday on felony charges of suspicion of child cruelty and possible injury or death. He is being held on $100,000 bail, with arraignment scheduled for March 30th. (https://bit.ly/3c9uLPc)

Hero Dog Stops Traffic To Save Owner Having Seizure
https://www.sunnyskyz.com/good-news/