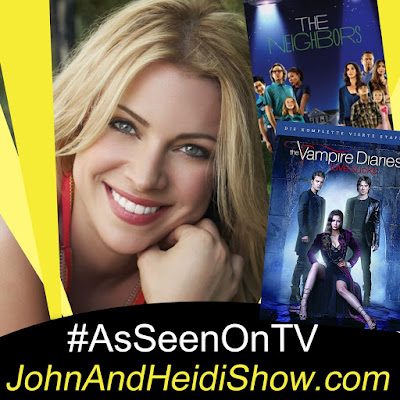 Today we visit with Teressa Liane ... known for her roles as Rhiannon Bates in Neighbours, as Mary Louise on The Vampire Diaries, Angelica on Into the Badlands and as Agrippina, in the Netflix documentary drama Roman Empire.

She was recently in a Lifetime Movie Network film His Killer Fan.

A survey of 2,000 Americans shows that most people feel like they’re being judged if they sneeze and cough in public now. Over half the poll (56%) feel the heat of judgmental eyes after sneezing or coughing. (https://bit.ly/3uh1BDZ)

Police say that a drunk driver caught doing burnouts in a car park in Adelaide's Central Business District has had his car impounded and will face court. Police said officers heard the car driving erratically “directly above the Hindley Street Police Station” at about 2:30 a.m. “Patrols went to investigate and saw a large amount smoke and the smell of burnt rubber inside the car park,” police said. The police station is part of a complex that includes a multi-story car park. Police stopped a green Holden Commodore leaving the building and spoke to the driver. A 42-year-old man was breath-tested and he allegedly returned a reading of 0.120, more than twice the legal limit. His license was suspended for six months on the spot. His car will also be impounded for 28 days. The man will face Adelaide Magistrates Court at a later date.(https://ab.co/3c8LEtD)

A new report claims Meghan Markle and Prince Harry's neighbors have moved out of their home. (https://bit.ly/31zuC1t)

Elizabeth Hurley shared a nude barnyard photo just to squash rumors that she will soon be appearing in a Waltons type reality show with her son. (https://bit.ly/39uz1qU)

Even with some limitations still in place, a lot of activities Californians haven’t been able to enjoy for most of the past year are suddenly within reach as the state begins reopening more widely. (https://bit.ly/3wkBXQE)

In Tulsa, Oklahoma, two horses on the loose tied up traffic and led police on a slow-speed chase. (https://bit.ly/3mctZnZ)

A Georgia Man who got into a fight with his boss after quitting his job at an auto repair shop received his final payday in $900 worth of greasy pennies. (https://bit.ly/3fzZcjY)

The first computer was invented in the 1940s. These days, supercomputers are everywhere—and they really don't need much space at all. Have an Xbox One posted up in your living room? That's a supercomputer. A laptop-tablet hybrid in your bag? That's a supercomputer, too. (Don't even get us started on the thing in your pocket…) But when supercomputers first came around, they needed much, much more space. Just take a look at the world's first one: The Electronic Numerical Integrator and Computer (ENIAC).

A Russian farm is experimenting with putting virtual reality headsets on cows. (https://bbc.in/2PFOIEG)

A group of three teenagers was caught on video stealing a vessel of holy water from a Catholic church in Lincoln last weekend. Lincoln Police Officer Erin Spilker said the thieves took the vat of holy water and the tool used to sprinkle holy water during a Mass in the gym of St. Michael Catholic Church on Saturday. Officials estimate the stolen items were worth $200. Police hope to use the video of the theft to identify the juveniles who were involved. (https://bit.ly/3dlEf9A)

A Florida man allegedly caught in the act peeping into a woman’s window is a bit worse for the wear after trying to get away from deputies. Lee County Deputies say they got a call about someone creeping around homes in Fort Myers. When they rolled up to the scene, deputies say they found 40-year-old Hugo Topete Alcatraz with his hands cupped around his eyes looking through the window. His face was pressed up against the glass. Deputies say he took off running, but he didn’t get far. He was cuffed and taken to the hospital for what deputies describe as “minor injuries.” His mug shot shows a big bandage strapped across his head and scratches on his face. He’s charged with Voyeurism for secretly observing the victim where she had a reasonable expectation of privacy. He’s also charged with Resisting Officer without Violence and Loitering or Prowling. He was taken to the Lee County Jail. (https://bit.ly/31KwAfP)