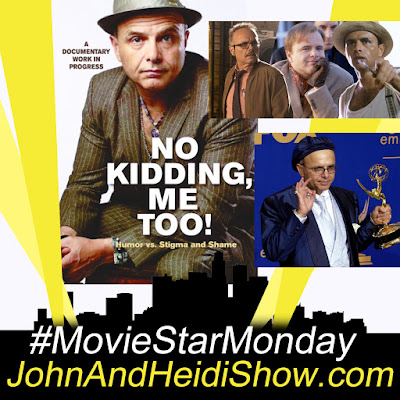 This #MovieStarMonday we visit Joey Pantoliano (The Goonies, Bad Boys, The Matrix, The Sopranos) and his daughter Dani (also a filmmaker) about their non-profit “No Kidding Me Too” (nkm2.org) and the projects they're doing. MAY is National Mental Health Awareness Month.

A survey shows that while 97 percent of computer owners use their machine every day, less 40 percent back up their computers at least once a week. And almost a third of all respondents back up their computers once per year or never. When it comes to backing up, use the 3-2-1 rule: Keep at least three (3) copies of your data, and store two (2) backup copies on different storage media, with one (1) of them located offsite. A simple way to do this is to have your computer do a nightly backup to an external drive. Depending on the importance of your data, take one of those backup drives off-site, say to a locked office drawer. And finally, use a service like BackBlaze to automatically back up your computer to the cloud — this way if a natural disaster takes out your computer, your backup drive and your off-site backup drive you still have a copy of your photos, tax records, etc. https://www.backblaze.com/cloud-backup.html

Two drunk friends were left with swollen penises after injecting each other with a cream they heard could give them extra girth. The French men, both in their thirties, watched a YouTube “tutorial” that offered bogus tips on how they could get a bigger penis. It told them to inject themselves with an anti-hematoma cream — sometimes used to treat piles — to boost the size of their members. But instead of experimenting on themselves, they decided to inject each other. Doctors who treated the unidentified pair revealed they suffered from 'progressive painful swelling of the penis during the night' and went to hospital the next morning. Dr Rich Viney, a consultant urologist at the Queen Elizabeth Hospital in Birmingham, told MailOnline: “In this story we have two amateurs, under the influence of alcohol, injecting a product not designed to be injected in their penises under the guidance of a YouTube video. This was never going to work out well and there's a real likelihood that there will be irreversible damage with long term implications for their erections.”(https://www.dailymail.co.uk/health/article-9241297/Two-drunk-friends-left-swollen-penises-injecting-piles-cream.html?utm_source=fark&utm_medium=website&utm_content=link&ICID=ref_fark)

NBC is developing a new unscripted adaptation of the classic board game “Guess Who?” (https://www.dailymail.co.uk/tvshowbiz/article-9489135/NBC-developing-new-unscripted-adaptation-classic-board-game-Guess-Who.html)

Sociologists are warning that TikTok is turning average people into viral stars and they don’t know how to handle the sudden relevance. (https://on.wsj.com/3ebbahu)

A new report claims Lego robberies are on the rise to satisfy a black market for the tiny toys. (https://n.pr/2RHbcq1)

A wild search is underway after officers say about five monkeys escaped from a private collection in Cincinnati. The monkeys were seen swinging from trees at a cemetery while evading officers. (https://bit.ly/3rW5sot)

Two dozen monkeys broke out of a zoo in Germany and spent the day lying in the sun.

A University in Michigan is now offering a “Cannabis Chemistry” scholarship to students with a GPA of at least 3.0. (https://cbsn.ws/3wGE4i7)

You can have a stroke if you blow your nose too hard.

A guy in New Zealand is doing custom caskets inspired by Legos, donuts and chocolate bars.

A two bedroom home in Louisville, Kentucky is selling for $399,000. The home is advertised as peaceful, private and scenic. Along with the two beds and two baths, however, this home features something a little more creepy. Described as a “bonus” by the real-estate company, a vault-like room in the 1986 home looks very much like a prison cell. A search on Google Maps reveals that most of this part of the house is situated underground, leaving users to speculate that it is actually meant to be used as a safe room in case of tornadoes or other natural disasters. https://www.instagram.com/p/CNaiJhaMvQ7/

Here’s something else you shouldn’t do if you want to avoid police attention: Don’t drive an SUV in Manhattan with a bazooka bolted to the roof… Warchyld — a rapper whose birth name is Chris Stoney — learned that lesson the hard way around 2:00 p.m. Saturday when bewildered cops swarmed his 2006 Hummer in Midtown Manhattan. The bazooka was actually an air-powered T-shirt rifle. But the cops were the real deal. “They told me to put my hands up,” Stoney told the Daily News. “They thought I was a terrorist.” “My hands were shaking and I was nervous. It felt like a scene from a Bruce Willis movie,” he said. The Philadelphia-based rapper said he was stopped on his way to Times Square to check out his promotional billboard and film a music video. Stoney explained to police the air rifle is designed to shoot out T-shirts to promote his brand and is a prop from his clothing company, “Wardrobe by WARCHYLD.” He was issued a summons for unlawful possession of an air rifle and is due to appear in Manhattan Criminal Court in July. (https://bit.ly/3ee1jrp)

Rescuers Build 'GiRaft' To Save Giraffes From Sinking Island
https://www.sunnyskyz.com/good-news/