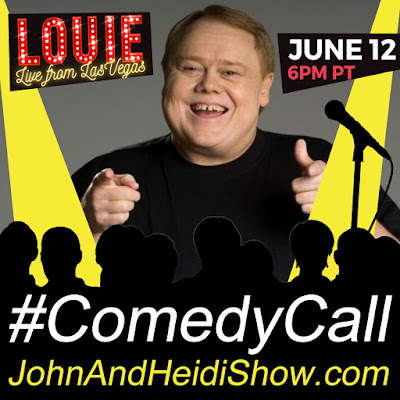 Today we have a #ComedyCall with the super funny Louie Anderson!
(Mama’s boy, COMING TO AMERICA)

A new study finds that whether you prefer sweet or savory snacks actually reveals a lot about your personality. The study says that if you have a sweet tooth chances are you like to live on the wild side of life. (https://bit.ly/2SXBh4E)

A middle-aged woman in Brazil sued police for mistaking two bags of flour she was carrying for cocaine. The woman spent two days in jail after a cop arrested her on the way home from the supermarket where she bought the flour.

Robert De Niro suffered a leg injury while filming the new Martin Scorsese movie “Killers of the Flower Moon” and said the pain is “excruciating.” (https://pge.sx/33Piwm7)

Jaden Smith is opening a restaurant that will serve free Vegan meals to the homeless. (https://bit.ly/3u3yfsB)

Sources close to Jennifer Lopez say her romance with Ben Affleck is THE REAL DEAL. Ben and Jen were engaged in 2004 but things ended terribly.(https://pge.sx/3w9eotd)

Eric Clapton is bashing vaccine safety propaganda commercials after having a disastrous reaction to the AstraZeneca vaccine. (https://www.dailymail.co.uk/news/article-9583109/Eric-Clapton-hits-propaganda-vaccine-safety.html)

Chicago has released 1,000 feral cats onto the streets to help end the city’s rat problems. (https://bit.ly/3wg5KJk)

ChicK-Fil-A is reportedly running out of its famous dipping sauces. (https://bit.ly/3bxYZLn)

A Montana ski resort has figured out a way to make fake snow from recycled sewage. (https://bit.ly/3w4qILj)

Miss Mexico has been crowned the winner of the Miss Universe pageant. (https://fxn.ws/3bQmJKT)

Koalas have fingerprints. Chimpanzees and gorillas have human-like fingerprints and so do koalas. In fact, koala prints are very similar to human fingerprints, even to expert crime scene investigators. As of yet, no koalas have framed humans for their crimes, but now we know it's not impossible

An Australian snowboarder has taken criticism after posting of a photo of herself breastfeeding her son while performing gymnastics. (https://bit.ly/3fo2DIP)

Responding to a report of a disturbance in the potato chip aisle of a Walmart in Ohio, police Tuesday arrested a Cleveland woman for allegedly striking a female victim in the face with a 10-pound log of ground beef. The confrontation at the store in South Euclid, a Cleveland suburb, involved two women--Maneka Garner and Precious Jackson--who once lived in the same duplex. 36-year-old Jackson, who was battered with the ground beef, previously secured a protection order against the 25-year-old Garner. According to police, when the pair spotted each other, Garner threatened to beat up Jackson. Cops say Garner pulled down Jackson's mask and attempted to spit on her. When she missed the target, Garner reached into Jackson’s shopping cart and removed the prepackaged meat log, which she then used to strike the victim “a couple of times in the face.” In the “Weapons Used” section of a South Euclid Police Department report, the ground beef is described as a “blunt object.” The meat logs retail for around $22. Garner, who was shopping with her five-year-old child, was arrested for assault and violating a temporary protective order. Custody of the minor was turned over to a relative. Garner pleaded not guilty to the two misdemeanor charges during her arraignment in South Euclid Municipal Court. (https://bit.ly/3wf9WcF)

A St. Petersburg man was linked to an armed burglary and carjacking after he left his cell phone behind at the scene. Police said that a man awoke and went to his living room to begin working from home. He noticed his laptop was missing, then saw a burglar in his kitchen. A police report said the burglar had “the victim’s replica Samurai sword in one hand and the victim’s vehicle keys in the other hand.” The burglar then “ordered him to pick up a clothes hamper filled with stolen items from the residence” and told him to bring it out to the resident’s truck. The victim did as ordered and the burglar left in the man’s truck. The man then called law enforcement. Deputies determined the burglar had left a cell phone inside the residence. They obtained a search warrant and found several photos and videos of the suspected burglar on the phone. They determined the phone belonged to 24-year-old Daemeion Grady. They also found the sword, which had Grady’s fingerprints on them. Grady was arrested on charges of armed burglary and carjacking. He also was charged with resisting arrest and is facing multiple drug charges. Bail on the burglary and carjacking charges was set at $150,000 each and Grady remained in jail on Sunday.(https://bit.ly/2QuQfyg)