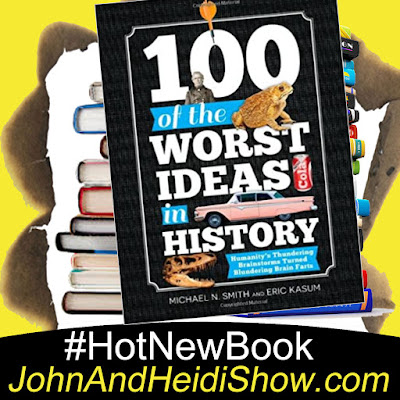 Our guest this weekend is Writer and Producer Mike Smith. He has compiled a list of 100 huge mistakes for his new book “100 of the Worst Ideas in History: Humanity’s Thundering Brainstorms Turned Blundering Brain Farts”

Here are several of the boneheaded moves including:

-How a confused chauffeur helped start World War I

-Who turned down the greatest product placement opportunity in cinema history

-How a baseball game helped hasten the death of disco

International Being You Day

A new poll says 77% of Americans plan on traveling this summer. (https://bit.ly/3eYZUql)

Rapper T.I. and his wife Tiny are under investigation for drugging and sexually assaulting women together. (https://rb.gy/sjisto)

Sarah Silverman posted a photo of her bare butt to promote her podcast.(https://pge.sx/3eT3Fxs)

“'Heard It Thru the Grapevine' - John Fogerty's Home For Sale”
John Fogerty was a “Fortunate Son” with his tremendous musical talents and became one of rock 'n' roll's biggest stars. His San Fernando Valley estate with 9,000 square feet, a fountain-fed swimming pool, eight bedrooms, spa, outdoor kitchen and a rooftop deck, where he probably saw a few “Blue Moon Nights,” is for sale at $9 million. https://www.toptenrealestatedeals.com/


An Australian woman says she got her tonsils removed and then woke up with an Irish accent. (https://rb.gy/t70j4x)

Nick Jonas has revealed that he cracked a rib in a bike accident. (https://pge.sx/3uYMz6Q)

A new report claims Melinda Gates could be trying to add billions to her children's inheritances through her divorce agreement. (https://rb.gy/srdlow)

Many of us had no idea that the last time we left our desks would be the last time we saw our office for months. Workplaces were quickly abandoned by those who were able to do their jobs at home due to the pandemic. For one woman in Scotland, her concern over what she had left behind was quite specific. Nine weeks into lockdown it dawned on Mhairi-Louise Brennan that when she walked out of her office she left behind a banana. She tweeted: “Knowing there is a banana in my desk drawer in work, which has been there since a week before lockdown, is making me feel anxious.” https://twitter.com/StoryfulViral/status

Riding a roller coaster could help you pass a kidney stone. After multiple people reported they had passed a kidney stone while riding Walt Disney World's Big Thunder Mountain Railroad ride, a research team from Michigan State University decided to investigate the phenomena in 2016. They conducted tests with a model kidney and found that there was a 64 percent kidney stone pass rate for those seated in the rear of the Thunder Mountain ride. That number was just 16 percent for those seated in the front.

Police in China recently detained a 30-year-old man for breaking and entering. He is accused of stealing a motorcycle and robbing two stores. Though the crimes were ordinary, his motive wasn’t. The man told police, “I want my father-in-law to know that I am not a good person so they will suggest my wife and I divorce and set me free.”

A woman who was hoarding gasoline tried to flee police in a stolen car and crashed into a fiery wreck in South Carolina. A Pickens County Sheriff’s deputy tried to pull over a 2007 Pontiac G6 Thursday evening after he ran the plates and found it was stolen. The driver, 28-year-old Jessica Dale Patterson, tried to outrun the pursuing deputy, but lost control of the car and flipped it over on the side of the road, according to a press release. “The vehicle immediately caught fire, and multiple explosions were heard inside the vehicle,” officials wrote. Patterson emerged from the car on fire herself, and the deputy pushed her to the ground to extinguish the flames. The suspect told authorities she was “hoarding” several containers of fuel in the trunk, which were responsible for the fire. There was no immediate word on the Patterson’s condition or charges against her. (https://bit.ly/3tOsEpB)

Angered over losing nearly $400 playing slot machines, a Florida Woman told police that she phoned in a bomb threat to a Tampa casino because she wanted to “blow off steam.” Investigators charge that 54-year-old Adele Belizaire used her cellphone to call the Seminole Hard Rock Hotel and Casino Tuesday evening to claim, “I left a bomb in your casino.” Belizaire, cops say, phoned in the threat while in her room at a Clearwater Beach hotel. Since Belizaire is a member of the Hard Rock’s “Player’s Club” rewards program, her phone number was in casino records, leading to her identification as a suspect. After tracking Belizaire’s phone, police confronted her around 4:00 a.m. Yesterday. Belizaire, the complaint reports, said she became “upset” after losing “around $380...on slot machines.” Noting that she has “anger issues,” Belizaire reportedly confessed to calling in the bomb threat as a way to “blow off steam.” Belizaire was arrested for making a false report about planting a bomb, explosive, or weapon of mass destruction. (https://bit.ly/3okmj46)