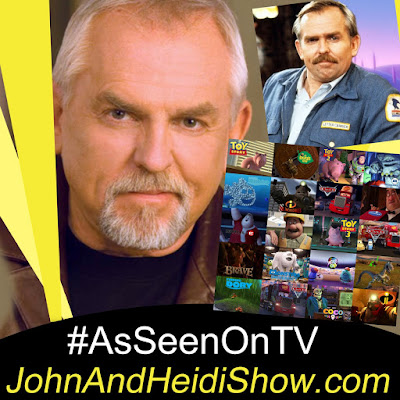 Today we visit with John Ratzenberger (Cliff Clavin from Cheers) (John Ratzenberger’s Made in America for the Travel Channel) John has voiced EVERY Pixar film. John is better known to a younger generation as the only actor to voice a character in every Pixar film including: the witty Hamm the piggy bank in Toy Story 1, Toy Story 2 , Toy Story 3 and Toy Story 4 ; P.T. Flea, the circus ringmaster in Bug's Life (1998); the lovable snow monster Yeti in Monsters, Inc. and Monsters University ; the ever-changing school of Moonfish in Finding Nemo; the philosophical character The Underminer in The Incredibles and The Incredibles 2 ; a Mac-truck in Cars , Cars 2 and Cars 3 ; Mustafa, the head waiter in Ratatouille ; as John, a human in WALL-E the construction worker in Up! ; Gordon the guard in Brave ; Harland in Planes , Fritz in Inside Out ; Earl in The Good Dinosaur (2015); Bill the Crab in Finding Dory (2016); and Juan Ortodoncia in Coco again as The Underminer The Incredibles 2 and Hamm again in Toy Story 4 ; Fenwick in Onward and a special cameo appearance in Soul.

John is Hollywood’s most outspoken advocate for American manufacturing, skilled labor and the companies that are the foundation of our great country, working tirelessly to shine a light on the importance of manufacturing and trades. Wednesday was National Skilled Trades Day!

Monsters at Work is an upcoming computer-animated streaming television series. It is a spin off of the Monsters, Inc. franchise, as well as a direct sequel to Monsters, Inc coming to Disney plus in July

A new study on home security finds over half of Americans (53%) get out of bed to investigate unusual noises, even though they know it’s likely nothing. Researchers find three-quarters of Americans say they always double-check that they locked front door before bed. (https://bit.ly/3u9CZxv)

A new study says 1 in 5 Americans are in chronic pain. (https://bit.ly/2SmDxCe)

Authorities in Arizona have arrested a man who police believe severed his finger while slashing his neighbor’s car tires after an argument. Maricopa Police Department spokesman Hal Koozer said Kevin Johnson was arrested and identified as the owner of the finger found on his neighbor's driveway. Francesca Wikoff told police she found the finger on April 15th after discovering her vehicle had two slashed tires on one side. Police said a trail of blood led to a nearby residence. Authorities said Wikoff and her husband went to a neighbor's home the day before. She told police a male neighbor joined them uninvited and became drunk and aggressive. Wikoff said the neighbor pushed and threatened her and her husband before being asked to leave. Johnson was arrested on multiple charges, including criminal damage, assault, threatening and intimidating, and disorderly conduct. Online court records did not list an attorney for Johnson, who could comment on his behalf. (https://yhoo.it/3vbV9Pc)

Jennifer Lopez has been hanging out with her ex-Fiancée Ben Affleck after ending her engagement to Alex Rodriguez. Affleck was spotted getting out of J-Lo’s Cadillac Escalade on Friday. (https://pge.sx/3eI5E6k)

Netflix is adding a shuffle feature that will allow users to view a randomly selected show or movie. (https://bit.ly/3eFh4HU)

The cult classic 80s movie, “Howard The Duck,” is getting a special 4K re-release this July to mark its 35th anniversary. (https://bit.ly/3gIxEt2)

The “Burning Man” festival was canceled once again due to the COVID-19 pandemic. (https://bit.ly/3aNd5I9)

Videos keep swirling from this past weekend when hundreds of people named Josh gathered to fight each other with pool noodles in what they called a “Josh Fight.” (https://wapo.st/32TIWTa)

A new report claims Prince Harry and Meghan Markle could be fully ditched from the Royal Family. (https://pge.sx/2PqWPoL)

Wendy’s is pledging to remove potentially harmful chemicals from their packaging. (https://fxn.ws/3e2X9Ur)

Dolphins have been trained to be used in wars. Dolphins are known widely as adorable, intelligent animals. What is not as widely known is that these crafty creatures were used by the U.S. and Soviet Union during the Vietnam War and the Cold War. Both countries studied the creatures for their sonar capabilities, but also trained them to detect mines, bring equipment to divers, find lost equipment, and guard submarines amongst other nifty tricks.

A prize-winning Greyhound in New Zealand was disqualified from a race after testing positive for Methamphetamine. (https://bit.ly/3sYr1W3)

Two men were arrested after stabbing each other during a fight in the parking lot of a McDonald’s in Neptune Township. 23-year-old Quoron Patterson 31-year-old and Kironn Hamilton were treated at a local hospital for minor injuries after the fight around 5:00 p.m. outside the fast-food eatery on Route 35. Both Neptune residents were charged with aggravated assault and two weapons offenses before being brought to the Monmouth County jail in Freehold Township. Hamilton was also charged with criminal mischief. According to online jail records, the two men remain held as of Wednesday morning. (https://bit.ly/3ntE0hc)

A Maryland man was booted off a Southwest Airlines flight for not wearing a mask while eating Twizzlers. “I, Avi Mandel, just got kicked off a plane because I wasn’t wearing my mask in between bites while I was eating,” the frequent flier from Baltimore County said in a video he took on the plane. “That’s so sad. That’s so wrong,” Mandel told the news outlet. “It was absurd. The way I was treated was absolutely absurd. It was crazy and it wasn’t fair.” Mandel was waiting for the plane to take off from Thurgood Marshall Baltimore Washington International Airport for Fort Lauderdale on Sunday when he opened a pack of his frequent snack. A flight attendant told him he had to put his mask on “and kind of, like, ran away,” he said. “And I’m like, ‘Oh, I guess she didn’t know I was eating.’ Then I hear on the loudspeaker, ‘Everyone who’s eating has to wear masks in between bites,’” Mandel continued. He said he didn’t think much of it at the time, but the plane returned to the gate, where a security team escorted him off. (https://bit.ly/3sZp4J8)