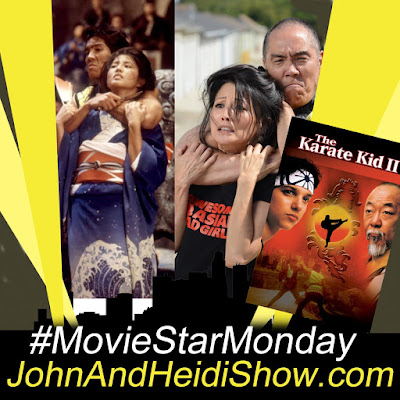 This #MovieStarMonday we visit with Yugi Okumoto (Karate Kid 2, o bra Kai) We will visit about his new action comedy "The Paper Tiger"
https://www.youtube.com/watch?v=c85U83SKQXw

Invisibly surveyed 1320 people to learn whether they approve of having their data sold for profit. Turns out 79% of people don’t approve of companies profiting from their data.

Here’s some things Invisibly learned from their survey:

79% of people do not approve of companies profiting from their data.

77% of respondents want to control who can access their data.

Men are more likely to be aware that their data can be sold for profit.

The results show that 79% of respondents don't approve of companies profiting off their data. https://www.invisibly.com/insights/data-for-profits

A JetBlue flight from the Big Apple to San Francisco was forced to land in Minneapolis after a passenger was allegedly seen “snorting a white substance” and sexually harassing a woman. 42-year-old Mark Anthony Scerbo of Mechanicville, New York, was arrested Sunday at Minneapolis–Saint Paul International Airport on suspicion of drug possession. Flight 915, which departed from JFK Airport, “was forced to divert to Minneapolis after a customer on board began acting erratically and aggressively toward crew members and other customers,” the airline said in a statement. “The flight was met by law enforcement, the customer was removed and the flight continued on to San Francisco,” it added. Cell phone video shot by Matt Kawashima and posted on Twitter shows a crew member explaining to everyone that the suspect had allegedly touched a female passenger and refused to wear a mask. He added that a bag with the substance was found at the man’s seat. Scerbo could also face federal charges for possible crimes committed on a plane traveling over state lines. (https://bit.ly/3wd6C1y)

“Jerry Seinfeld's Colorado Ski Home”
Jerry Seinfeld has listed his 27-acre mountain home in Telluride, Colorado for $14.95 million. The 11-bedroom, 12,300-square-foot home was built in 1991, and purchased by the Seinfelds in 2007. Home features include a gym, yoga studio and private trails. There is a separate guest home too. Tom Cruise's 320-acre estate in Telluride is also for sale, asking $39.5 million. https://www.toptenrealestatedeals.com/

Cops in Lehigh Acres, Florida reported that a large alligator was seen chasing people through a Wendy’s parking lot. (https://bit.ly/3osqlI3)

A Chicago cat is going viral after jumping from the fifth floor of a burning building, bouncing off the ground, and then walking away. (https://rb.gy/fkaili)

For those of us who suffer from seasonal allergies, the spring and summer months can be miserable. A few tweaks to your daily routine can keep the outdoors from invading your home. The blog Apartment Therapy gives some great ideas, but here’s one we’ve never heard: change your clothes and shoes as soon as you enter your home. Leaving your clothes by the door prevents the transfer of allergens into other rooms. Don’t bring these clothes into the bedroom and put them in the hamper, either — that brings allergens into the bedroom and defeats the purpose.

Scientists know that sitting is bad, but they’ve discovered what appears to be the best remedy: Walking — for as little as two minutes per hour (according to American Society of Nephrology). While most people in the study were largely sedentary, those who walked around for about two minutes per hour had a 33 percent lower risk of death during the study than people who sat without walking breaks.

If you were planning to attend the Baby Jumping Festival in Castrillo de Murcia, Spain, in June I have some bad news — it’s canceled. Hopefully it will return in 2022. In this bizarre festival, grown men, dressed as El Colacho (the devil) jump over tiny babies to ward off bad luck and to cleanse the babies of the evil that infests them when they are born.

A Miami, Florida Instagram influencer known for flaunting her wealth on social media has been accused of $100,000 fraud in allegedly obtaining a pandemic relief loan to fund her lavish life. As reported by The Independent, 31-year-old Miami Instagram influencer Danielle Miller, has been charged with wire fraud. Miller allegedly used the personal information of a Massachusetts resident in order to obtain COVID relief funds meant for small businesses. She accessed the information through the state Registry of Motor Vehicles. She is also accused of using the victim’s personal info to create a bank account she controlled. Prosecutors said the Miami Instagram influencer’s alleged fraud continued after she used the Massachusetts resident’s personal information to apply for a federally-funded Economic Injury Disaster loan. Authorities say over $100,000 in federal money was deposited into Miller’s bank account. NBC News Boston reported that Miller used the money on herself, buying expensive stays in hotels and private flights. (https://bit.ly/2QopfQU)

Prosecutors will not pursue criminal charges against a Florida teacher who was arrested for allegedly spraying four teenage students with an aerosol disinfectant because they “were not wearing their mask properly.” In a pair of recent Circuit Court notices, prosecutors reported that four felony child abuse charges filed against 51-year-old Christina Reszetar were being dropped since “facts and circumstances revealed” do not warrant prosecution. Reszetar was arrested in January following a bizarre incident at Largo High School, where she has worked for eighteen years. Reszetar, who teaches math, allegedly used a can of Claire disinfectant to spray “directly onto the path, face, and body” of four students. According to an arrest affidavit, Reszetar reportedly told police that, “the kids were not wearing their mask properly.” A school surveillance camera recorded Reszetar “intentionally” approaching the students to spray them. The teens were not injured by the spray, which is used to disinfect surfaces. During Reszetar’s initial appearance in court, a judge referred to the spraying as a “severely misguided attempt at discipline.” Reszetar, who pleaded not guilty to the child abuse counts, was freed without bond and ordered to have no contact with the four students and stay away from Largo High School. Reszetar’s name and email address are still listed in the school’s online staff directory.(https://bit.ly/2QgmPDU)

After Losing His Eye In A Suicide Attempt, Drew Robinson Hits His First Homerun
https://www.sunnyskyz.com/good-news/4259/