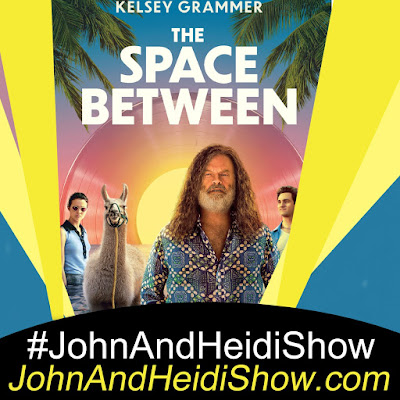 Today we visit with Academy Award nominee Rachel Winter (producer, Dallas Buyers Club) about her directorial debut of THE SPACE BETWEEN, starring Kelsey Grammer as an inspiring coming-of-age story set during the iconic 90s LA music scene.The film follows an unlikely duo: an aspiring young mailroom worker at a record label and a has-been rock star. Filled with comedy, drama, and heart, THE SPACE BETWEEN features terrific performances and will especially appeal to music lovers.

THE SPACE BETWEEN debuts on Digital and Video-on-Demand on June 15.

National Corn on the Cob Day

In a new poll, 65% of voters say that psychedelic substances do not have medical use. (https://bit.ly/2RfXUAJ)

Safety is sexy…that’s right, a new survey of 2,000 people reveals that more than half of American drivers (56%) would not date someone who they consider to be an unsafe driver. Moreover, nearly a fifth of Americans (18%) say they’ve ended things with a partner due to their driving habits. Also, three out of four people believe that the way a person takes care of their car also says a lot about what that driver is really like. (https://bit.ly/3v5qHWM)

27-year-old Missouri man Tanner Hutcherson was arrested yesterday on a felony narcotics charge following an auto accident in Columbia. Hutcheson was a passenger in a vehicle involved in a “DWI accident.” A Columbia Police Department spokesperson declined to identify the controlled substance Hutcheson is alleged to have possessed. He is locked up in lieu of $30,000 bond on the drug charge. Hutcheson’s rap sheet includes multiple convictions for theft, as well as convictions for burglary, leaving the scene of an accident, and drug possession. In December, Hutcheson was sentenced to five years in prison on a felony-controlled substance conviction, but a judge suspended execution of the sentence and instead placed him on five years’ probation. Upon being booked Thursday into the Boone County jail, Hutcheson’s “D.A.R.E./Drugs Are Bad!” t-shirt was confiscated along with his other clothing items.(https://bit.ly/3cnNqqh)

A trailer for the Apple TV+ documentary about the genesis of the “Peanuts” comics titled “Who Are You, Charlie Brown?” has been released. (https://bit.ly/3z1CCb4)

Screen Media has unveiled a July 2nd release date for the new Megan Fox thriller “Till Death,” which finds her handcuffed to a dead man. (https://bit.ly/3fFDhaG)

Ice cream maker Ben and Jerry's is making a CBD laced ice cream that gives consumers the health benefits of marijuana without the high. (https://benjerrys.co/3g8m3Sp)

A man is running for Mayor in Mexico City despite the fact that he’s wanted by the Drug Enforcement Administration for trafficking drugs. Rogelio Portillo is believed to be a major cocaine trafficker. (https://bit.ly/3g6GnmQ)

A man and a young partner-in-crime are being accused of stealing large amounts of pop tarts, milk, cheese sticks, apple sauce, and other items from an elementary school in Catawba County. According to the Catawba County Sheriff’s Office, 24-year-old Jacob Gherret Hamrick and a juvenile accomplice have been identified after breaking into Blackburn Elementary School. This break-in was discovered by school administrators around 7:30 a.m. Wednesday. Officials say it appears these suspects entered the school through an unsecured door. Investigators with the Catawba County Sheriff’s Office Criminal Investigations Division located Hamrick and almost all of the items stolen from the school during a canvass of area residences. Officials say the motivation for these crimes appears to be opportunity as opposed to a need for food or drink. Among the stolen items recovered were 89 packages of pop tarts, 38 cartons of milk, 42 packages of cheese sticks, 11 containers of strawberry apple sauce, two cartons of orange juice, and six compound bows used by the school’s archery program. Hamrick has been arrested and charged with breaking or entering and larceny. He received a $1,000 unsecured bond. The juveniles involvement in this incident will be addressed with the Office of Juvenile Justice. https://bit.ly/3gcwOTM

For 100 years, maps have shown an island that doesn't exist. Almost nothing is known about Sandy Island, a land mass about the size of Manhattan in the Pacific Ocean off the coast of Australia. Supposedly, explorer James Cook discovered it in 1774, and it began appearing on nautical maps in 1908. It wasn't until 2012, when a team of Australian scientists set out to survey the island, that they discovered there was no island there at all. The scientists guessed that Cook may have in fact spotted a "pumice raft" of floating volcanic stone and gas. The Sydney Morning Herald even published an obituary for Sandy Island.

A Russian artist has constructed a portrait of Vladimir Putin out of 500 human teeth. (https://bit.ly/34DCRLp)

A Texas mom was arrested for allegedly posing as her 13-year-old daughter for nearly a whole day of middle school. 30-year-old Casey Garcia allegedly slipped into the unnamed school in San Elizario dressed as the teen — complete with a hoodie, backpack, and face mask — to prove a point about lax security, according to YouTube videos she posted. During the bizarre stunt, nobody noticed she wasn’t her daughter, Julie, until seventh period at the end of the school day, Garcia said in the videos, which were first reported by Insider. “I’ve been here all day, face to face with teachers,” she said in one of the videos. “Do I look like a seventh-grader? No? Cool. Awesome.” Footage shows her strolling through a school hallway in high-top sneakers — at one point greeting the principal, who appears to have no idea she’s a grown woman. Her safe schools crusade took an even weirder turn when she was caught, confronted by police, and later arrested. She was charged with suspicion of criminal trespassing and tampering with government records. (https://bit.ly/3cqM4LD)

A 26-year-old man was removed from an American Airlines flight by authorities in Chicago on Sunday after causing a “disturbance.” A Chicago Police Department spokesperson told Fox News that the man was detained until the plane, which was traveling from Portland, Maine, landed at O’Hare International Airport. A spokesperson for American Airlines confirmed to Fox News that police were requested to meet Flight 3297 at O’Hare due to a “disruptive passenger.” Chicago police told Fox News that the man was released and that no citations were issued. The flight landed safely, with no injuries reported among its 75 passengers and four crew members. An initial tweet by Windy City Weather and News claimed the passenger was banging on the plane’s cockpit door trying to enter, though American Airlines says the report is “untrue.” The incident comes just days after a Delta flight heading from Los Angeles to Nashville was forced to make an emergency landing on Friday after a male passenger allegedly attempted to hijack the plane. (https://bit.ly/352AoKF)

Teacher Gives Student The Shoes Off His Own Feet At Graduation Ceremony
https://www.sunnyskyz.com/good-news