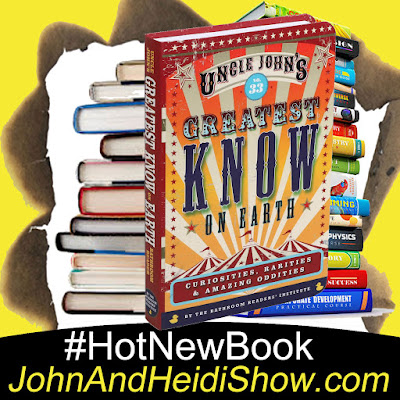 Researchers from the University of Colorado at Boulder claim to have found the optimal way to pay off student loans. They say your best option is to pay off the debt as soon as possible, thus saving tons on interest. (https://bit.ly/2SP1TFf)

License, registration and... a beer? A Texas man literally asked a game warden who pulled him over for driving erratically to hold his beer. KWTX reports that an unidentified motorist who was picked-up earlier this month for driving while intoxicated gave one of the two arresting officers his adult beverage to hold in the Lake Waco area. The traffic stop reportedly occurred when a man in a truck driving on the wrong side of the road cut the officers off, then got back into the right lane and waved for Texas Police and Wildlife Patrol wardens to go around him. That didn’t work. “During the traffic stop, the wardens noticed the driver was unable to turn down the music on his radio.” The driver allegedly struggled to tell officers what he’d been doing, “then picked up his beer and handed it to the wardens.” His speech was slurred and his coordination was said to have been compromised. A sobriety test reportedly confirmed the motorist was intoxicated. The Houston Chronicle reports the man was arrested.(https://bit.ly/3xwDq6n)

Alec and Hilaria Baldwin are launching a podcast about mental health.(https://bit.ly/2SKARiq)

The actor who played Gunther on Friends has revealed he has prostate cancer.
https://on.today.com/3cZdIzn

Chrissy Teigen recently stated that she’s “good” when asked how she’s been coping with the backlash of her cyberbullying scandal. (https://pge.sx/3gXMVov)

A Ukrainian couple that went viral after handcuffing themselves together for 123-days in order to save their relationship have broken up. The husband proposed the handcuffing on Valentine’s Day and they spent the last four months working, sleeping, eating, and even going to the bathroom with their right arms handcuffed together. (https://bit.ly/3zJwlBs)

New York City’s Madison Square Garden welcomed back fans at full capacity for the first time since the coronavirus pandemic started, as thousands of vaccinated people gathered to watch the Foo Fighters take the stage. (https://cbsloc.al/3gLFi5q)

A video from the Oregon Zoo has gone viral after showing the long-awaited hatching of a baby California Condor. (https://bit.ly/3iYyvXD)

According to a new report, New York City is lagging behind other cities around the country in getting staffers to ditch working-from-home and return to the office. (https://bit.ly/35vfYKK)

Star Trek's Scotty stormed the beach at Normandy. Canadian actor James Doohan, best known for playing Montgomery "Scotty" Scott on the original Star Trek series, served in World War II with the 3rd Canadian Infantry Division. As a commissioned lieutenant, he led his troop up a mine-strewn Juno Beach as part of the Allied Forces' D-Day invasion. Later in the day, he was wounded by friendly fire that caused the amputation of the middle finger on his right hand. You might not have noticed it because, during his time on Star Trek, directors did the best they could to avoid showing the injury on screen.

An artist in England has created what he calls “Mount Recyclemore” – a sculpture of the G7 Leaders’ faces created from broken electronics. (https://n.pr/2SHRTgP)

A brotherly “argument over some chicken” turned violent Monday evening when a Florida man allegedly threw a knife at his sibling, according to cops who say the airborne weapon “got stuck in the victim’s right leg.” 19-year-old Messiah Harris-Smith is facing a felony aggravated battery charge in connection with the June 14th incident at his family’s St. Petersburg residence. The victim, who told police he did not want his brother prosecuted, will “need to receive stitches,” according to an arrest affidavit which does not further describe the chicken argument. Harris-Smith, who has pleaded not guilty, was released last night from the county jail on his own recognizance. Harris-Smith was arrested earlier this year for allegedly pushing and threatening to kill his mother during an argument in their home. Prosecutors subsequently decided not to pursue a misdemeanor domestic battery case against the 6’ 1”, 250-pound teenager.  https://bit.ly/35u44R8

A Florida Woman is facing a domestic battery charge after allegedly pelting her boyfriend in the face and chest with a plate of chicken. Investigators charge that 43-year-old Jennifer Booth struck the 56-year-old victim with the chicken while the couple was eating last Wednesday night on the porch of their Bradenton home. Booth’s companion, who cooked dinner, was not injured by the poultry fusillade. He told police that Booth “became violent” during a verbal argument and “picked up the paper plate of chicken and threw it in my face.” After the man called 9-1-1, Booth was arrested and booked into the Manatee County jail on the misdemeanor rap. She was released Friday on $500 bond. Booth has three prior arrests, “most recently 2015 Domestic Violence,” according to a court filing. While Booth and the victim share a surname, a pretrial services report lists her marital status as “single,” while an arrest report identifies the victim as her boyfriend. Booth is an avid hunter whose Facebook page is stocked with pictures of her posing with animals she has shot dead, images that have prompted online derision.(https://bit.ly/35u44R8)

GOLF COURSE OR REHAB: Brought to you by TimeForRehab.com

I read the name of a REAL business located somewhere in the world... Heidi has to guess if it's a Golf Course or a Rehab Center.