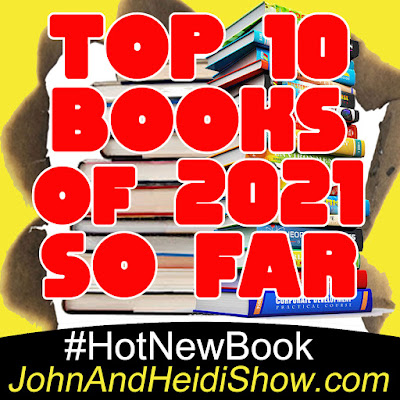 Today we visit with book editor Erin Kodicek to discuss the Amazon Books Editors Top 10 picks of 2021 so far and their reviews for what made each book stand out:

Great Circle by Maggie Shipstead: https://amzn.to/3zSHQXh
At a young age, Marian Graves becomes obsessed with flying, and she’ll do whatever it takes to get into the sky and circumnavigate the globe. Fast forward 100 years, and Hadley Baxter is remaking herself in Hollywood as the role of Marian Graves in a Hollywood bio-epic. From Montana to Los Angeles, London to New Zealand, Great Circle follows these two women who yearn for adventure and freedom, and like flying, it’s the thrill of the century. –Al Woodworth

Klara and the Sun by Kazuo Ishiguro: https://amzn.to/2TUl80f
When he was awarded the 2017 Nobel Prize in Literature, the committee noted how Ishiguro “uncovered the abyss beneath our illusory sense of connection with the world.” In this beautiful novel, Ishiguro presents an “Artificial Friend,” a robot girl with artificial intelligence designed as a playmate for real children. It is a simultaneously heartbreaking and heart-mending story about the abyss we may never cross. —Chris Schluep

The Code Breaker: Jennifer Doudna, Gene Editing, and the Future of the Human Race by Walter Isaacson: https://amzn.to/2Umk45u
Isaacson is famous for writing Steve Jobs and Leonardo da Vinci, so a title like The Code Breaker might imply a book about a lesser character. But the 2020 Nobel Prize winner in Chemistry, biochemist Jennifer Doudna, who co-developed the gene editing technology CRISPR, is a giant in her own right. CRISPR could open some of the greatest opportunities, and most troubling quandaries, of this century—and this book delivers. —Chris Schluep

We Begin at the End by Chris Whitaker: https://amzn.to/3gZdF88
We Begin at the End is a story of regret and revenge, wrapped around a mystery, buried inside a tale of star-crossed love. Thirteen-year-old “outlaw” Duchess Radley—fierce but vulnerable—attempts to protect her troubled mother but instead sets off a fateful chain of events in this gorgeous, harrowing novel. —Vannessa Cronin

What's Mine and Yours by Naima Coster: https://amzn.to/3xLbcF3
For fans of Celeste Ng, Ann Patchett, and Jacqueline Woodson, What’s Mine and Yours beautifully unravels the hurt, happiness, and hope that one generation bestows upon the next. An unforgettable portrait of how parents and kids—white and Black—handle love and loss, racism and loyalties. —Al Woodworth

The Four Winds by Kristin Hannah: https://amzn.to/3gRvN3G
Set during the Great Depression and featuring an unlikely heroine who will lodge herself into your heart, The Four Winds is a reminder, when we so urgently need it, of the resiliency not only of the human spirit, but of this country as well. Kristin Hannah's latest reads like a classic. —Erin Kodicek

Punch Me Up to the Gods by Brian Broome: https://amzn.to/3wWKYzy
Hard-hitting, unflinching, and written with the unfettered gusto of a fist in motion, Punch Me Up to the Gods is a searing memoir of racism, homophobia, and addiction from a writer of enormous talent. With humor, grace, and honesty, Broome investigates his own identity and his experience as a gay Black man in America. —Al Woodworth

Gold Diggers by Sanjena Sathian: https://amzn.to/3qiCEHP
This debut novel is part examination of the immigrant experience, part exploration of the dark underbelly of suburbia, all with a dash of magical realism thrown in. Two second-generation Indian Americans discover the secret to success is drinking a lemonade made from literal gold, and their lives are forever fused together and altered. If this funny, realistic, and heart-breaking story is any indication, Sathian is an author to watch. –Sarah Gelman

The Plot by Jean Hanff Korelitz: https://amzn.to/3d6A1TY
The Plot is a riveting story within a story that is a Rubik’s Cube of twists. Jake Finch Bonner, a once-promising young author, is floundering in obscurity when a one-of-a-kind plot falls into his lap. The resulting book rockets Jake to stardom—only, the plot wasn’t his. Korelitz’s thriller keeps readers guessing right up to its shocking end. —Seira Wilson

Chatter: The Voice in Our Head, Why It Matters, and How to Harness It by Ethan Kross: https://amzn.to/2TWMJxQ
It turns out that some of the most important conversations we have are with ourselves. Ethan Kross examines the voice that speaks inside our head, explains why it’s there, and reveals how we can learn to rely on it rather than being broken by it. Chatter is a masterful, revealing take on human nature. —Chris Schluep

A new survey shows that Americans are ready for a post-pandemic shopping spree, as 45% of adults plan to spend more this summer than the past two combined. Researchers also found that 48% think they’ve saved enough money over the course of the pandemic to spend guilt-free this summer on restaurants and vacations. (https://bit.ly/3q1o0o2)

A Philipsburg man is behind bars after state police say he was on meth when he led a state trooper on a chase while riding a minibike. 46-year-old William Shutt was riding a camouflage minibike through a gas station parking lot just after 7:00 a.m. when he was spotted by a state trooper, who knew he was wanted on Clearfield County warrant. When the trooper turned on his lights to pull him over, Shutt made a U-turn and sped away on Route 322. State police noted that Shutt drove in the opposite lane toward oncoming traffic and rode over sidewalks as he led the trooper on a chase through Philipsburg Borough. Shutt then rode though the parking lot of Sheetz before riding through the harbor Inn’s rear courtyard. The trooper followed Shutt as he rode north and, after he turned, he crashed the minibike into an embankment. Shutt told the trooper he had methamphetamine and Adderall pills in his pocket and he said he used meth a few hours earlier. A search of Shutt allegedly turned up two bags of meth weighing a total of 8.5 grams, a gram of marijuana, eight Adderall pills, a glass pipe, and a straw. (https://bit.ly/2SGF9XV)

Traci Lynn Johnson is in talks to join “The Real Housewives of New Jersey.” (https://pge.sx/2ShBbVA)

The wand and glasses used by Daniel Radcliffe in the “Harry Potter” films are expected to raise thousands at an upcoming charity auction. (https://bit.ly/35sRYrC)

Victoria's Secret is replacing their angels with feminist women. (https://bit.ly/2U9FEtT)

A video of a black bear dancing on a pole in the backyard of a New Hampshire home has gone viral. (https://bit.ly/3vKDEFD)

A Tik Tok Bride knit her wedding dress on the New York City Subway over the course of nine months on her way to work. (https://bit.ly/3qksbvu)

Tornadoes can cause "fish rain." Tornadoes can develop over water just as well as they can over land. When they do, they're called "waterspouts," and they suck up large amounts of lake or sea water—as well as whatever's swimming in that water. If the waterspout travels on to the land and the winds decrease, there's nowhere for those fish to go but down. As far as we know, there's no tornado powerful enough to pick up sharks, but a fish-nado is entirely possible.

North Korean dictator Kim Jong Un has warned of potential food shortages in the Hermit Kingdom as photos showing his own weight loss are scrutinized by analysts around the world. North Korea’s economy has deteriorated as a result of Pyongyang’s decision to close its border with China due to the onset of the COVID-19 pandemic. (https://bit.ly/3q7JTSD)

A modern-day Bonnie and Clyde story, except they’re even bigger idiots. 31-year-old Matthew Swett and 32-year-old Kaila Ellig are in huge trouble after a police chase ended with them breaking into the Haines City Mayor’s home. It all started at a construction site at 2:00 a.m. on Monday when an officer spotted a 2003 blue Toyota. The suspects spotted the officer and the K9 and they jumped back into their car and they drove straight at the officer and the K9 and actually struck the K9 and the patrol car. A short police chase ensued but they eventually stopped at a wooded area when their car burst into flames. They climbed a fence and cut a hole in the screened-in lanai of Haines City Mayor Morris West’s home. After a standoff, the K9 was able to subdue Swett, and Ellig cooperated without a fight. (https://bit.ly/3cMe3W4)

The Warren County Sheriff’s Office arrested 53-year-old Frank Owen of Colchester, VT after he reportedly tried bring a loaded handgun and switchblade knife into the Great Escape Amusement Park. Police say the weapons were found by members of security at the park as part of the security screening before entering the park. A member of the Warren County Sheriff’s Office reportedly responded to the area after the weapons were discovered. Deputies say Owen had a legal license for the gun in Vermont, however he did not have a license to carry in New York. Owen was charged with the following: Class C felony of Criminal Possession of a Weapon in the 2nd degree and Class A misdemeanor of Criminal Possession of a Weapon in the 4th degree. Owen was arraigned at the Centralized Arraignment Part Court and remanded to the Warren County Correctional Facility for lack of $2,500 cash bail or $5,000 insurance bond. (https://bit.ly/2SDwTbc)

Border Collie In Car Crash Went Missing. He Was Found On A Farm, Herding Sheep
https://www.sunnyskyz.com/good-news