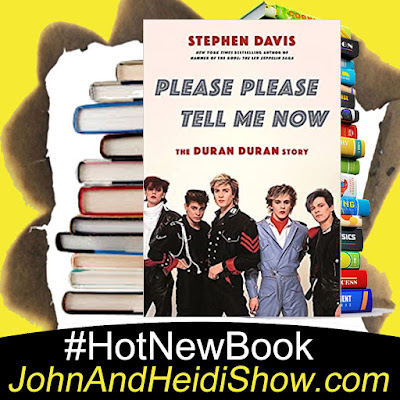 Today we visit with Stephen Davis, a music journalist described as perhaps "America's best-known rock biographer," having written biographies of Guns N' Roses, Michael Jackson, Bob Marley, Carly Simon and Jim Morrison. He is the author of numerous books, including the New York Times bestsellers HAMMER OF THE GODS: The Led Zeppelin Saga and WALK THIS WAY: The Autobiography of Aerosmith; and coauthor of Fleetwood, the memoirs of Fleetwood Mac drummer Mick Fleetwood. Davis' journalism has appeared in Boston Phoenix, Rolling Stone, The New York Times, The Boston Globe, and many other publications.

His newest book is out now! PLEASE PLEASE TELL ME NOW: The Duran Duran Story - https://amzn.to/3dsVgiY

A new survey finds that nearly half of Americans credit many of their successes in life to playing video games. 59% of people surveyed said video games improved their hand-eye coordination while another 50% said it helped them learn time management skills. (https://bit.ly/3h6JJs5)

A new study says that BS-ing your way through a conversation is a sign of intelligence. (https://bit.ly/2SAajAg)

A Pocatello man faces a felony charge for allegedly kicking an officer during an arrest. 27-year-old Justin Matthew Espinoza also faces misdemeanor charges for driving under the influence and resisting arrest. Officers witnessed Espinoza, the driver of a Nissan Altima, take the turn from Burnside Avenue onto Yellowstone Avenue. He turned wide, police reports read, crossing into the left lane. Officers also noted that the Altima’s headlights were not on. After pulling him over, officers requested Espinoza’s license and registration. Espinoza opened his wallet and removed his credit card before putting it back and closing his wallet. Reports also show he was unable to find his insurance card and registration. During his interaction with police, Espinoza was noted as having bloodshot and glossy eyes. He also slurred his speech and struggled to keep his balance. Espinoza was pulled out of his vehicle, after declining get out on his own. After striking his head against the inside of the patrol vehicle, Espinoza was taken out of the backseat and proceeded to yell at and kick the officer. He was booked for driving under the influence and resisting arrest, both misdemeanors, as well as felony battery of an officer. (https://bit.ly/3quvGiM)

Khloe Kardashian has told her fans that she's not doing anything for her 37th birthday. (https://bit.ly/35V4twt)

Comedian John Mulaney and Olivia Munn were seen laughing it up at a Lunch Date in Los Angeles. (https://pge.sx/3w0JuTw)

Michael Strahan’s ex-wife Jean Strahan was arrested on Friday for harassing her ex girlfriend and violating an order of protection. (https://pge.sx/3wZjGs4)

A man jumped out of a moving plane at Los Angeles International Airport on Friday night after he attempted to breach the cockpit. (https://bit.ly/2T2nsSZ)

The unemployment rolls are shrinking faster in states that have axed federally boosted payments as the economic carnage from the COVID-19 pandemic eases. (https://bit.ly/3do7vNL)

Sweat doesn't actually stink. You might notice that any sweat you produce right after a shower doesn't smell so bad. That's because your sweat itself isn't stinky; it's the bacteria on your skin that breaks the sweat down that causes the odor. Additionally, you'll find that the sweat on your arms and legs doesn't smell as much as your armpits. That's because sweat glands in your armpits secrete more protein into a dark, damp environment—the perfect place and food for bacteria.

A guest at Walt Disney World was filmed hopping on and off an attraction over the weekend, allegedly in pursuit of a cucumber. The incident took place on the “Living With the Land” attraction at Epcot, which is described as a “gentle boat tour” of Disney World’s experimental greenhouses and agricultural areas. In the footage, which was initially posted to TikTok, a woman can be seen jumping off the boat, reaching for something from one of the vines, and then stumbling — and falling — as she attempts to return to the ride vehicle. Guests are not permitted to stand up or exit the attraction. As seen in both the original video and the re-uploaded version, on-screen messages appear to indicate that the woman was attempting to steal a cucumber growing from one of the vines. Viewers are now describing the woman’s actions as dangerous and “completely inappropriate.” A representative for Disney World was not available to comment on the incident. (https://bit.ly/3gLHSZj)

A California man accused of swiping a ring-tailed lemur from the San Francisco Zoo and Gardens could spend up to one year behind bars should he be found guilty of the crime. Cory McGilloway made his initial appearance in federal court Monday on a charge of violating the Endangered Species Act. If convicted, he faces up to a year in jail and up to $50,000 in fines. Prosecutors have alleged that McGilloway, a 31-year-old from Los Angeles, sneaked into the zoo’s Lipman Family Lemur Forest on Oct. 13, 2020. He allegedly left with one of the zoo’s four lemurs, named Maki, who was reported missing the next morning. A quick investigation uncovered evidence of forced entry into the enclosure, sparking a frantic search for the missing critter, which zoo officials described as “highly endangered” and requiring “special care.” Authorities also offered a $2,100 reward for information leading to Maki’s safe return. Just two days later, a woman recorded a video of a man, who authorities now believe to be McGilloway, walking a lemur on a leash on Treasure Island, about two miles off San Francisco’s mainland shore. With help from San Francisco Animal Care and Control, Maki was recaptured and returned to the zoo. (https://bit.ly/3h0EatB)