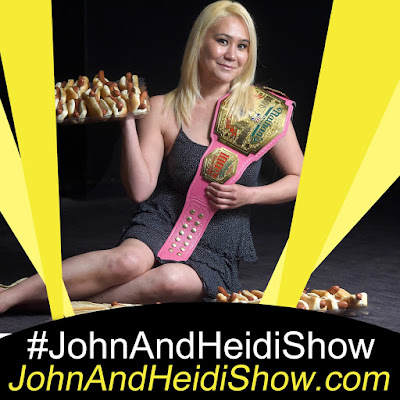 A new survey of 2,000 Americans reveals that 62% of people confess they “fake it till they make it” when it comes to things they don’t know. The survey also discovered which topics respondents most commonly feel out of their depth when discussing, with one in four (24%) confessing to not really understanding how politics work. (https://bit.ly/3hBmSE3)

A new poll shows more than half of Americans feel that Fourth of July parties are risky. (https://bit.ly/3yaPgTQ)

Bruce Springsteen opened up about his DWI during his return to Broadway on Saturday. (https://bit.ly/3w9Gq7L)

A musical based on Harvey Weinstein may be heading to Broadway. (https://bit.ly/3h1ffrh)

Kim Kardashian will design the underwear for Team USA.(https://bit.ly/3hbacTO)


SCOOP OF THE DAY: Brought to you by PureCana.com (promo code radio)

A new report claims the Broadway show “Hamilton" got $30 million in financial aid from the Federal Government. (https://nyti.ms/3jtLBMV)

The Florida Aquarium has shared a video of an Octopus using its tentacles to paint a picture. (https://bit.ly/3h6y6kD)

A new report claims that Kevin Federline could request an evaluation of Britney Spears before her conservatorship ends. (https://pge.sx/3drZnfm)

French police are on the hunt for a Tour De France fan who caused a massive crash with a cardboard sign she was holding for TV cameras. (https://nbcnews.to/3hgUEOH)

There's an entire town under a rock. If you've ever been accused of "living under a rock," you'll feel right at home in Setenil de Las Bodegas in Spain. Many of this tiny town's 3,000 residents live and work and play in a gorge beneath a huge rocky outcropping, where homes are built right into the rock. It provides so much shelter that historians think this area has been occupied by human settlements since the Stone Age.

Canada has recorded the highest temperature in its history after a village in British Columbia reached 115 degrees Fahrenheit. (https://fxn.ws/3A6A109)

Florida police are looking for a man who was captured on camera appearing to shove a woman in line at a Smoothie King. The scuffle broke out at a location in Pembroke Pines in late April, but police released video of the incident on Monday, appealing to the public for help locating the suspect. The surveillance shows a man at the front register of a Smoothie King. He turns around visibly upset at the woman behind him and tears off from his face what appears to be a COVID mask. Only the bottom half of the woman is visible. The man then steps forward and appears to tear off the woman’s COVID mask while making angry gestures. The camera cuts to another angle, showing the man aggressively shove the woman to the ground. The video has no sound and it is unclear what prompted the altercation. A brief image of the suspect is seen at the end of the footage. He is a dark-skinned male, in his 20s or 30s, of medium build, and wearing a blue t-shirt, a black Steelers hat, and jeans. Anyone with information on the matter is being asked to contact Detective Stogner.(https://yhoo.it/2SUcGOF)

A man was arrested after he stole a $1.2 million yacht and took it for a joy ride from upstate New York to Vermont over one of the Great Lakes. And when 56-year-old Robert Morris was busted by police he made the outrageous claim he was only giving it a test drive. The would-be captain took the 48-foot yacht christened “Volans” from New York’s Rouses Point Marina on Monday morning and was caught after crossing Lake Champlain to a state park off the coast of St. Albans, Vt. The boat, a Jeanneau Prestige 500, was located by a US Border Patrol helicopter. Morris was nabbed on Burton Island by the St. Albans Police Department and slapped with multiple charges, including possession of stolen property. At a court hearing the day after his arrest, Smith was talkative and said he “was water testing the boat after making mechanical fixes.” Morris was a wanted fugitive in New Hampshire and had a list of prior arrests. He had also told cops he was given permission to take the boat and said he was caught bringing the yacht back to its owner, which the owner denies. The accused, who made an “inappropriate gesture” to the webcam as he left the meeting, will undergo a competency exam. Morris is to be extradited to New York to face additional charges. https://bit.ly/3h5F2xl

LEGO Is Beginning To Make Their Bricks From Recycled Plastic
https://www.sunnyskyz.com/good-news/