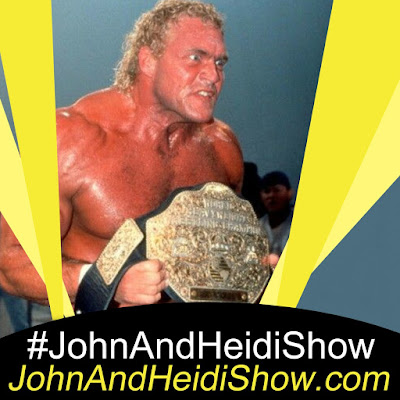 Today we visit with Sid Vicious. Sidney Raymond Eudy, an American actor and retired professional wrestler. He's best known under the ring names Sid Vicious, Sid Justice, Sycho Sid, or simply Sid, and for his work in World Championship Wrestling (WCW) and the World Wrestling Federation (WWF, later WWE). Between those promotions, Eudy enjoyed major championship success and performed to an international television audience in four decades from the 1980s to the 2010s.

a new survey reveals what Americans really feel about barbecuing, pizza and their favorite foods on the grill. The survey of people from coast to coast revealed some surprising results: 57% say hot dogs are a sandwich; 15% of those who put cheese on their burger put it on the bottom of the meat; boneless wings are more popular than bone-in; and 18% eat their pizza with a fork and knife. 56% of respondents say grilling is the best method to prepare a hot dog while 13% think microwaving is the best way.

He was on a mission from God. A Louisiana man who said God told him to visit a local jail to get his family out ended up behind bars on a drug possession charge. 35-year-old Bobby Koch was arrested just after midnight Saturday at Ouachita Correctional Center where he drove shortly after the alleged divine intervention – and after doing meth. A guard at the jail called the Ouachita sheriff’s office on a “harassment” complaint. A guard at the entrance pointed a sheriff’s deputy to the sole car in the parking lot, where Koch sat. Koch got out of the car and said “God told him to come here” to get his family out, the deputy wrote in his report. Koch admitted to having used meth before visiting the jail. The accused then agreed to a search for his car, where the deputy found a bag inside a backpack that contained what appeared to be methamphetamine. After being informed he was being charged with possession of a controlled dangerous substance, Koch was transported inside the jail.(https://bit.ly/3hmaOq5)

WEEKEND BOX OFFICE... “F9: The Fast Saga” brought in $24 million to remain atop the weekend box office. “The Boss Baby: Family Business” opened at No. 2 after taking in $17.3 million. “The Forever Purge” made $12.7 to finish third. “A Quiet Place Part II” finished fourth with $4.2 million. “The Hitman's Wife's Bodyguard” capped the top five with $3 million.

If you’re a UFO tracker head to Idaho, which has the most UFO sightings per person.

A study of 160,000 resumes turned up this statistic: more than half include mumbo-jumbo vague phrases like “team player,” “driven,” and “detail oriented.” Experts say these phrases reveal nothing about a job candidate and should be cut out from resumes entirely. Don’t brag about your great “communications skills” — the top vague phrase, appearing on 12.5% of resumes. So what should you put on your resume? Give specific details, such as “grew sales department by 68%” or “produced payroll for 2,000 employees.” Most recruiters only spend 5-10 seconds on a resume, so you’d better grab their attention quickly.

Researchers from the UK have invented a new weight loss device that stops users from eating by clamping their mouths shut. (https://bit.ly/2UgFyAB)

The fire hydrant patent was lost in a fire. The fire hydrant patent is credited to Frederick Graff Sr., who was the chief engineer for Philadelphia Water Works during the early 1800s. Unfortunately for Graff Sr., the patent was destroyed when the patent office in Washington, D.C., burned down in 1836. After 100 years, retired firefighter George Sigelakis reinvented the hydrant after they had been failing to work in too many critical emergencies.

A little girl in Sri Lanka got the scare of her life when she opened her front door to find a nine-foot crocodile sitting at her doorstep. (https://bit.ly/3h9HyUi)

A tractor-driving Texas woman was arrested after allegedly driving the massive vehicle onto a Fourth of July parade route without permission on Saturday. 61-year-old Laurie Bostic is accused of causing the wild scene at Saturday’s parade in the city of Rockwall. Without approval, Bostic allegedly took part in the event and refused to cooperate with police and officials who said she drove dangerously along the route. At one point, Bostic refused to pull over for police and eventually crashed into a fence before getting arrested. She is charged with evading arrest, disorderly conduct, criminal mischief and interference with a processional. (https://bit.ly/36frhHe)

A Butts County 19-year-old told the police he was unaware that he may have urinated on a toilet seat at the maintenance shop where he works. But a sheriff’s deputy in neighboring Monroe County was sent to the shop on High Falls Road to see what was the matter. The teen told the deputy he had used the restroom and gone out to finish working when a man “came outside and began to yell about the pee on the toilet seat.” The man, 36, was then said to have pulled out a handgun, cocked it and, according to an incident report, told the teen, “Come down here, I’m gonna shoot you in your (redacted).” The deputy spoke to the alleged gunman who admitted having confronted “everyone outside the business in reference to pee being on the toilet seat.” The man was arrested on aggravated assault and other charges. The report said he first claimed to have pointed a “radar gun” at the teen but later, after a pistol turned up hidden in box of glass doors, the man said he lied because, as the report put it, “he was scared.” (https://bit.ly/3AumM9A)

After A 12-Hour Shift, These Cops Spent Hours Helping Waffle House Staff Get Up And Running https://www.sunnyskyz.com/good-news