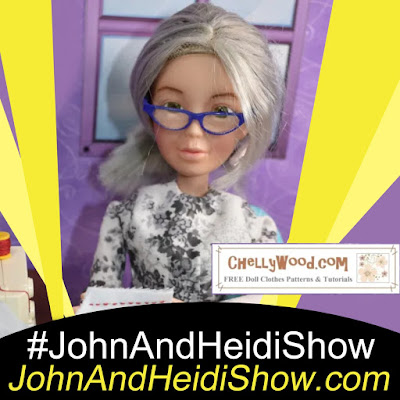 The internet is filled with interesting things. I discovered Chelly Wood and her videos made me smile. She creates clothing patterns for dolls and gives them away for FREE on her fun website ChellyWood.com.

There are many videos on YouTube that show Chelly as a Barbie style doll. She narrates the videos in her own voice. Very fun!

The patterns are available for kids to make clothing for their own dolls over the summer or whenever they have some time on their hands!

National Cheer Up The Lonely Day

• Always put your toppings on the hot dog, not the bun.

• After the age of 18, the use of ketchup is frowned upon by the Council.

A survey finds 1 in 10 people have never eaten a hot dog.

A new study shows that five minutes of deep breathing can lower your blood pressure. (https://bit.ly/3qWPOuf)

A Chinese villager was disappointed to find the bear that had been terrorizing his chickens could also hold its liquor. The poultry farmer had plotted to trap the black bear by baiting it with honey mixed with two liters of strong alcohol. The next morning he found the spiked honey gone and two dead chickens.

After opening in theaters across the world, Fast & Furious 9 has proved that there is still plenty of mileage in the franchise as it became the first movie to cross the $500 million mark globally since the general reopening of theaters. (https://bit.ly/2VgZggl)

Paramount is making a revival of the Nickelodeon show “iCarly.” (https://bit.ly/3yAelrs)

Members of the Backstreet Boys, NSync, and Boyz 2 Men are teaming up for a four-night show in Las Vegas. (https://bit.ly/3wncogN)

Supermodel Ubah Hassan, who was once the face of Ralph Lauren’s spring/summer campaign, is producing her own line of hot sauces. (https://pge.sx/3yka3Vg)

Boston Dynamics has programmed a team of robot dogs to perform a dance routine to a BTS song. (https://bit.ly/3hmvQWO)

Britney Spears' long-time manager has resigned amid rumors that she wants to retire. (https://fxn.ws/36ib2cE)

Saudi Arabia imports camels from Australia. Saudi Arabia is known for its vast expanse of desert, so it may seem unbelievable that they rely on Australia to supply them with animals that dominate their landscape. Australia originally had camels imported to be used for transporting heavy loads or for riding. They were let loose when their work was done, causing an unwanted spike in their population. Australians then sold the camels back to desert-based countries like Saudi Arabia, which use camels at a much higher volume.

A Massachusetts man was arrested after he allegedly destroyed $10,000 worth of lobster at a seafood company that he used to own.  Sandwich Police said Joseph Vaudo was caught on surveillance cameras last week shutting off the power and oxygen supply to a Cape Cod shop’s live seafood tank. Vaudo, 70, was also allegedly spotted throwing trash into Superior Lobster and Seafood’s commercial dumpster, cops said. The crustacean were left without enough air or water flow for about nine hours. About 2,000 pounds of live lobster were found to be highly stressed by the ordeal, significantly reducing their retail value. Vaudo was ordered in December to give up ownership of the market to a commercial rental property business amid bankruptcy proceedings. He pleaded not guilty to charges of felony vandalism of property and illegal dumping at his arraignment on Monday.  (https://bit.ly/3y4LyuU)

A California Highway Patrol officer stopped a Toyota Prius that had what looks like a Starlink dish fastened to its hood, the agency said in a Facebook post. The “visual obstruction,” sitting right smack in the middle of the car’s hood, landed the driver a ticket. “Sir I stopped you today for that visual obstruction on your hood. Does it not block your view while driving?” an officer said, quoted in a post on CHP Antelope Valley’s Facebook page. The driver replied: “Only when I make right turns...” The driver told the CHP officer that they were using the antenna to have Wi-Fi for a business they run out of their car, the agency told CNBC, which first reported on the traffic stop. “Yes, it is in fact illegal to mount a satellite dish to the hood of your vehicle,” CHP’s Facebook post continued, citing a state law that bars other view-obstructions like objects hanging from a rear-view mirror, or poorly positioned GPS mounts. “It’s about safety folks. These are the real stories of the Highway Patrol. Safe travels everyone.” (https://bit.ly/3jGt6VH)