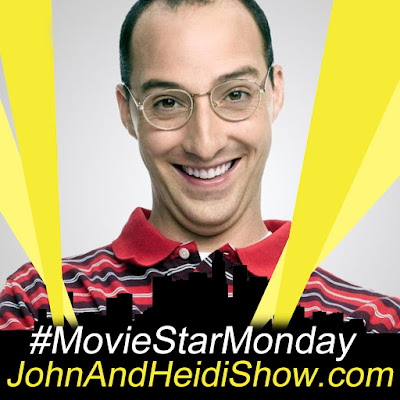 This #MovieStarMonday we visit with Tony Hale, best known for playing Buster Bluth in Arrested Development. He's also been in several movies and other TV shows. His latest project is a family/action/adventure series... Mysterious Benedict Society on Disney +. This program premiered Friday June 25th

According to a new study from the University of Southern Florida, just three consecutive nights of poor sleep causes “great deterioration” in mental and physical well being. A poor night’s sleep was defined as any evening in which an individual slept less than the universally recommended six to eight hours per night. (https://bit.ly/3dQW2qq)

A new study shows using a cell phone for more than seventeen minutes a day increases the risk of getting a tumor. (https://bit.ly/3qWei74)

An Indiana man has been sentenced to sixty days in jail, five years of probation, and banned from Yellowstone National Park for five years after pleading guilty following a June 21st altercation in the park. He was also fined $1,550 along with a $50 special assessment fee. 31-year-old Kyle F. Campbell of Fairmont, Indiana, reportedly got belligerent after being told by a kayaking guide that his group was too drunk for a scheduled trip from Grant Marina on Yellowstone Lake. “Campbell and his group became upset and created a disturbance that led the kayak guide to call security officers and park law enforcement rangers,” the Park Service said. “During the encounter, Campbell made threatening comments and gestures toward the officers. He also exhibited signs of being intoxicated and refused to obey officers’ orders. Campbell continually struggled and kicked at the rangers, resisting arrest, and later injuring himself while banging his head in the patrol car.” Campbell pleaded guilty to disorderly conduct; threatening, resisting and intentionally interfering with a government employee, violating the lawful order of a government employee, being under the influence of alcohol and a controlled substance to a degree that it may endanger oneself or others; and contempt of court for refusing to comply with a warrant seeking a blood sample. (https://bit.ly/3jEafe1)

Actor Val Kilmer is now making a biopic about his own life. (https://bit.ly/3hnj9uN)

The owner of an Oklahoma City marijuana dispensary shot a man who allegedly tried to rob the place while armed with two knives. The man is in critical condition, but he’s still alive. (https://bit.ly/3hZoGa7)

A New Jersey driver failed so badly at street parking that he backed up over a curb and into the storefront of a driving school. (https://bit.ly/2TO0Sxz)

A new AI computer has figured out exactly where in the universe aliens would be hiding. (https://bit.ly/3ypETMf)

One man once survived two atomic bombs. Tsutomu Yamaguchi survived both nuclear attacks to Japan when the U.S. dropped atomic bombs during World War II. Yamaguchi, sent to Hiroshima on business on August 6th, 1945, saw the U.S. drop the first atomic bomb. Miraculously, he survived with burns across his face and arms, but made it home to Nagasaki. Three days later, the second atomic bomb hit, flattening Yamaguchi's home. Because his family was out finding ointments to treat his already existent burns, they were safe in a tunnel and miraculously survived as well.

Police in Kuwait have arrested a resident—an Egyptian man—for posting a video online in which he rants about bad weather and dust storms. The arrest underscored the country’s restrictions on expression and drew criticism on social media Monday over his detention. Kuwait’s Ministry of Interior said Sunday the person behind the "offensive" video was arrested and referred to authorities, which would “take the necessary legal action against him.” In a dashcam video posted on TikTok, the man can be heard complaining about the blinding sandstorm that has engulfed Kuwait for the past few days. “I’m inside a dust storm right now, I literally can’t see anything in front of me,” the man says, showing the dust coating the highway like a thick fog. "Fine, Kuwait, fine,” he adds, with an expletive in Arabic. The clip went viral on Twitter, racking up tens of thousands of views. Some social media users, who saw the arrest as a sign of Kuwait's crackdown on free speech and mistreatment of migrant workers, showed their support for the Egyptian man by posting their own videos insulting the weather. In a region full of governments hostile to free expression, the Gulf Arab state of Kuwait stands out for its outspoken parliament and relatively vibrant civic life. However, authorities routinely use the cybercrime law to police criticism and prosecute dissidents. (https://bit.ly/3AaSZCR)

A Florida Man is behind bars for trying to prey his way through college. 18-year-old Rafael Woloski was arrested on felony charges after trying to burglarize homes in the Vero Beach neighborhood where he lives with his parents. Woloski, carrying a small knife, was apprehended by cops shortly after a caller dialed 9-1-1 to report that a male had entered her home through a broken window. Woloski was collared after police spotted him walking a few blocks from the victim’s residence. During questioning, Woloski reportedly “admitted to committing three burglaries” in the neighborhood, including a break-in at a residence across the street from his family’s home. Woloski told police that he “decided to burglarize homes to get money for college,” according to an arrest affidavit. He also claimed that “the devil kept tempting him to steal.” Charged with a trio of armed burglary counts, Woloski is locked up in the Indian River County jail in lieu of $75,000 bond. He is scheduled to be arraigned on August 13th. (https://bit.ly/3hpF9nt)