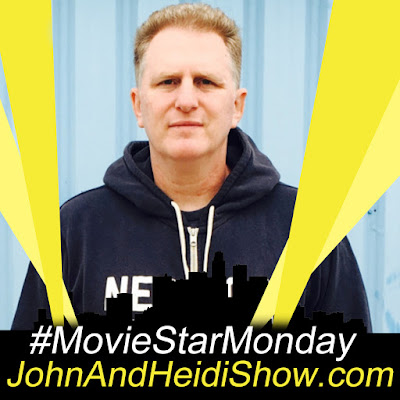 This #MovieStarMonday we visit with Michael Rapaport (Deep Blue Sea, True Romance, The Simpsons, Showtime's "White Famous", NBC's "Friends", Higher Learning, The Heat, Big Fan, Small Time Crooks, Hitch, Do The Right Thing & more) We will visit about his comedy career, his movie and TV career and talk about his Peabody-nominated and critically-acclaimed NETFLIX comedy series Atypical about a young man on the autism spectrum looking for love and independence. Just returned for its fourth and final season on Friday, July 9. Michael Rapaport, plays the father on the series. https://www.youtube.com/watch?v=bSbF25mXDyM

According to a new study, stroke patients who spend time listening to their favorite singers during recovery may heal faster. Scientists from the University of Helsinki report that exposing patients to vocal music improved their language skills notably more than listening to instrumental tunes or audio books. (https://bit.ly/3xBdeba)

A survey finds 13 percent of moviegoers never buy something from the concession stand.

A 20-year-old man is facing charges of public intoxication and indecency after Knoxville Police say he took his clothes off in the middle of Broadway and attempted to enter a passing car. Anthony Webb, 20, was charged with public intoxication, public indecency, and resisting arrest. Officers responded to the 2800 block of Broadway just after 9 p.m. Monday, June 14 for multiple reports of naked person in the middle of the roadway. According to an incident report, Webb approached a vehicle in the roadway and attempted to gain entry. Police also said he exposed himself to patrons of nearby businesses and passing cars when attempting flips in the roadway. Responding officers reported Webb was in an incoherent state and appeared to be under the influence of a narcotic. He attempted to flee from law enforcement before being restrained by three officers. Webb was taken to UT Medical Center for an evaluation. He is set to be arraigned on July 16 in Knox County court. https://www.wate.com/news/local-news/knoxville-police-arrest-naked-man-in-the-middle-of-broadway/

Demi Moore was joined by daughter, Rumer Willis, during a trip to Greece, where she became godmother to a baby girl. The town of Sitia, where the baptism took place, marked the special day with a social media post on Facebook. (https://pge.sx/3hXY7Sx)

Team USA lost in a shocking upset to the Nigerian basketball team in a pre-Olympic game. (https://bit.ly/3e6f0t2)


The city of Tokyo has installed a 1600-square-foot billboard featuring a hyper-realistic 3-D cat in order to cheer up Japanese Citizens during the ongoing pandemic. (https://bit.ly/3yGsnIm)

What do you forget most? A survey finds forgetting passwords and forgetting things we meant to buy at the grocery are our top two most forgetful moments.

Four in ten of us are not excited about the idea of sharing the road with self-driving cars.

A survey found the average person has six home repairs or updates on their to-do list — and to complete just the top three would require an average of $680 combined. Those with home improvement experience reveal the average repair has three things go wrong. More than six in ten homeowners turn to search engines, YouTube or helpful apps to get their repairs and updates done.

Cheetahs don't roar. Cheetahs can't roar, but they can purr, meow, hiss, bark, and growl instead. This type of behavior is much like the domestic cats we keep in our homes.

In Poland a man came home to find a burglar in his favorite reclining chair. But he didn’t have to worry about the crook harming him — he was dead. Investigators think the burglar’s heart was racing and he sat down to rest and then died.

Police have arrested a woman who allegedly dragged an officer with a stolen pickup truck during a chase in Worcester on Tuesday morning. Around 8:45 a.m. officers were called to Lake Avenue for a report of a stolen Raymond James Restoration pick-up truck spoke to the owner who said he saw a woman climb in his truck and drive off. Officers started pursuing that truck, which was equipped with GPS, in the area of Charlton Street and pulled over the driver, later identified as 38-year-old Johanna Gardell, before she took off again. Gardell allegedly weaved her way into oncoming traffic on Main Street where she struck a van. Two detail officers then approached the stolen truck to try and pull her out but officers say Gardell backed the truck up at a high speed and struck a cruiser behind her. In the process, she knocked down one of the detail officers and briefly dragged them. Gardell was later taken into custody when she pulled into the drive-thru lane at a McDonald’s on Shrewsbury Street to order food.(https://bit.ly/3hquFpf)

After getting pulled over outside a Walmart in suburban Cleveland, a motorist sought to “deter officers from the traffic stop” by calling 911 to falsely report a shooting a few blocks from the store. Muhammad Kabir, 34, was driving Saturday afternoon when his vehicle was pulled over by a South Euclid Police Department officer outside a Walmart Supercenter. Kabir, who lives in nearby Cleveland Heights, was behind the wheel despite having a suspended drivers license and a vehicle with expired plates. Additionally, a two-year-old boy who was with his mother in the car was not in a child safety seat. In an effort to avoid a series of traffic citations, Kabir “called in a fake 911 call of a male being shot” on a street near Walmart. The gambit was intended to “deter officers from the traffic stop,” according to a police report. Instead, a police dispatcher was “able to ping the caller of the 911 call back to Walmart,” and the “phone number of the 911 caller matched the male that was on the traffic stop.” Kabir was then arrested for making false alarms. He was arraigned Tuesday in South Euclid Municipal Court on the misdemeanor count. Kabir has also been charged with multiple traffic law violations. (https://bit.ly/2U2OGJo)

A Drug Addict Stole His Dog, So He Offered To Pay For Her Treatment
https://www.sunnyskyz.com/good-news