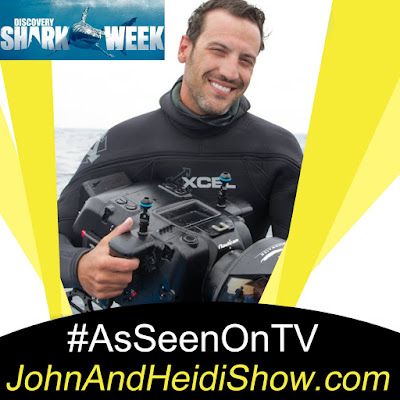 Today we visit with Joe Romeiro, Naturalist and Award winning cinematographer Joe Romeiro developed a love for the ocean at a young age. Shark Week 2021 began on Sunday July 11. The summer tradition airs every year on the Discovery Channel -- running for eight days. This year's series will wrap up on Sunday, July 18. https://www.discovery.com/shark-week

A new study claims that methamphetamine in waterways could be turning trout into drug addicts. (https://bit.ly/3k79OsD)

A survey of parents with an infant found respondents are faced with about 34 tough decisions per week, or over 1,760 difficult decisions in baby’s first year. Choosing a name for their baby was found to be the most difficult decision new parents face (37%), followed by deciding whether to breastfeed or to use formula (34%). Other difficult decisions in the first year of parenting, according to the survey: figuring out childcare: 30%; which formula to use: 29%; where the baby sleeps: 27%; decorating the nursery: 21%; how to sleep train: 20%; whether to post pictures on social media: 19%; finding the right pediatrician: 19%; whether to parent as their parents did: 19%.

A Wyoming rancher was pinned under an ATV for two days after a rollover crash, and survived by drinking bottled water and beer. Frank Reynolds, 53, was rounding up livestock on a neighbor’s pasture when his vehicle tipped over on top of him Sunday, dislocating his shoulder and breaking his ribs. Reynolds said he honked the ATV’s horn until the battery died, but no one was in earshot in the remote area outside Gillette. The badly bruised rancher was able to access water and Keystone Light from his cooler, until concerned friends and family organized a search for him Monday, and found him a day later when he was badly bruised and 'out of it.' Reynolds is expected to stay in the hospital a few more days and eventually recover. (https://fxn.ws/3AQVsm6)

It’s been a great year for Matthew Perry when it comes to real estate. In addition to acting, writing and producing, the Friends star has been buying, restyling and reselling some fabulous California homes for many years. He recently sold two properties: his stunning Century City condo in L.A. for $21.6 million and also a Malibu beach home for $13.1 million. His condo sale is the most expensive in Los Angeles since at least 2015.


Single men who are hoping to land a girlfriend may want to keep images of their cats out of their dating profile, or so suggests a study. Colorado State University researchers showed photos of two men — posed with and without a cat — to hundreds of women and found that when the man’s feline companion was in the picture, they were viewed “as less masculine; more neurotic, agreeable, and open; and less dateable.”

Pope Francis will be staying in the hospital for a few more days to recover from his colon surgery. Vatican spokesperson Matteo Bruni said “In order to optimize his medical and rehabilitative therapy, the Holy Father will remain hospitalized for a few more days.” (https://bit.ly/3hAV2sM)

Tesla is building a solar-powered neighborhood in Austin, Texas. (https://bit.ly/3eakJOz)

In an annual survey about fast food restaurants McDonald’s came in last.

In Germany, people help toads cross the road. You might not want to bring up the popular video game Frogger in Germany. There, they like to protect their frogs, toads, and other amphibians. In order to save them from harm when crossing the street, conservation organizations installed more than 800 fences along popular roadways. Along these fences are buckets, so when they try to cross, they eventually hop into one. At the end of the day, wildlife conservationists collect the buckets and release frogs across the road into a nearby forest with ponds and lakes.

China has completed their first spacewalk since 2008. (https://bit.ly/3hnJFUG)

When it came to making himself at home, this burglar took it to the extreme. A man broke into a Covington home on June 30th and proceeded to start laundry and make himself a snack in the kitchen. Deputies were called to the residence around 4:00 a.m. When they arrived, they learned that the homeowners had been startled awake by the burglar who opened their bedroom door. Amy Padgett, the homeowner, said she screamed and went after the man, her husband and son beside her, as they followed him down the stairs. Padgett said that a window was unlocked the morning the suspect entered during a historic heat wave. When the suspect left, Padget surveyed her home and found their powder room in disarray and their dryer was turned on. Padgett said the suspect also heated up Eggo waffles, a Lean Cuisine meal, and ate some yogurt and popsicles. The suspect, identified as Philip Neal Cedarleaf, was found a short distance away from the home and was taken into custody.(https://bit.ly/3AGICXv)

A northeast Missouri man is hospitalized after accidentally shooting himself while fishing. It happened around 3:00 p.m. Monday on a farm east of Lancaster, Missouri. Schuyler County Sheriff Joe Wuebker told KTVO the victim is 33-year-old Derek Shaw of Memphis, Missouri. The sheriff said Shaw was fishing alone on a family member’s farm when the shooting happened. Shaw told investigators he was messing around with his .357 magnum when it accidentally discharged. The bullet from the handgun struck Shaw in the upper left chest area. He was able to call 9-1-1. Shaw was flown from the scene to University Hospital in Columbia, Missouri, for treatment. A hospital spokesman told KTVO on Wednesday that Shaw was listed in fair condition. Lancaster Fire and Rescue, Schuyler County Ambulance and Downing Fire Department helped the Schuyler County Sheriff's Office with the incident. (https://bit.ly/3AHjGzj)