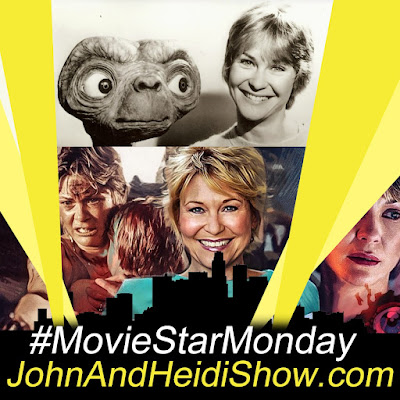 This #MovieStarMonday we visit with Dee Wallace (ET, Cujo, The Howling) She has a NEW FILM out now called "The Nest" https://www.youtube.com/watch?v=92kRK9WLNtg

A new study says the consumption of red meat could lead to early death. (https://cnn.it/36SlKqA)

A new study reveals that tomatoes send out an electric “warning” signal to the rest
of the plant when insects attack. The alarm system is so sensitive, even the tiny footsteps of a caterpillar can set it off. (https://bit.ly/3hT9vjW)

A Florida man told police officers he was “teaching it a lesson” when he tried to throw a live alligator he had stolen from a miniature golf course onto the roof of a beachside cocktail lounge. The 32-year-old man was arrested early Thursday when Daytona Beach Shores police officers spotted him attempting to throw the gator onto the roof just off Highway A1A. The officers then saw the man take the alligator by its tail, hit it against the awning of the building, throw it to the ground and stomp on it twice. The man from Homestead, Florida, was taken into custody and charged with possession and injury of an alligator, unarmed burglary of an occupied dwelling, theft and criminal mischief. The man told officers that he had stolen the gator from an enclosure at a nearby miniature golf course. (https://bit.ly/2UmI7lf)

A new report claims Disney has employees in every theme park whose job is to go on rides. (https://bit.ly/3xUEfXg)

A rare species of insect has emerged at the Big Bend National Park in Texas, that locals are calling an "Acid Spewing Land Lobster from Hell.” (https://bit.ly/3rr4z8R)

Jeff Bezos is describing his trip into space as his best day ever. (https://n.pr/3rCDcZP)

Jeff Bezos, the world’s richest man, blasted off to space Tuesday morning on his company Blue Origin’s first commercial flight. Bezos is the second person in the “billionaire space race” to take off in his own rocket, following Virgin Group founder Richard Branson’s flight on July 11th. (https://bit.ly/2UX99Qe)

Your liver can regrow itself in three weeks. The Greeks had it right with Prometheus, it turns out. According to Greek mythology, the titan was punished by having an eagle eat his liver day after day. The liver would regrow at night, leaving Prometheus at the bird's mercy. It turns out, the regenerative properties of this story are partially true: Doctors have found that the liver can regrow in three weeks, not one day.

A Japanese robot named Pepper is being urged to retire after getting fired from almost every job it’s ever had. (https://on.wsj.com/3B60qLV)

She’s a criminal oversharer. Oklahoma police tracked down a suspect on their “Most Wanted” list — after she asked about reward money in a reply to their Facebook post about her alleged crime. Lorraine Graves was busted on a charge of accessory to murder after she commented on a Tulsa Police Department post on Wednesday that listed her as the force’s “Weekly Most Wanted.” Graves replied to the post, saying, “where’s the reward money at?,” a screenshot of her post shows. Detectives arrested her Thursday in north Tulsa and her bond is set at $500,000. Authorities were asking for tips about Graves’ whereabouts in relation to the March murder of Eric Graves, a 30-year-old who was found shot dead inside an apartment at the St. Thomas Square Apartments. It wasn’t clear how Lorraine and Eric were related. Two other suspects, Jayden Hopson and Gabriel Hobson, were slapped with murder charges for the shooting. Her comment had some Facebook users confused. “Giiiiirl you better stay off social media they can track you !!” one person commented. “Aint gonna be as funny when you get processed,” said another. Her comment has since been deleted but the post announcing her capture has gone viral and had drawn more than 1,200 comments. (https://bit.ly/3ip1vpG)

Nashville Fire Department investigators arrested a Taco Bell shift leader after employees allegedly set a fire that caused tens of thousands of dollars in damage while they were playing with fireworks inside the restaurant. On Monday, NFD investigators charged 25-year-old Courtney Mayes with felony aggravated arson. The fire was set on July 5th at the Taco Bell. The store’s management contacted fire investigators and reported surveillance footage that showed employees causing the fire. Investigators said the surveillance footage showed employees locking the restaurant to keep customers from entering the business. They then allegedly ran around the store with fireworks in their hands. At one point the employees went into the men’s restroom and returned to the lobby a few minutes later and placed an item in a trashcan near the door. Employees allegedly went outside the restaurant and began recording video of the trash can on their phones. While doing so, the employees locked themselves out of the store and called 9-1-1 when they saw smoke coming from the trash can. Firefighters forced their way into the store and were able to extinguish the fire. They also found damage from fireworks inside the men’s restroom. The fire caused an estimated $30,000 to the building. NFD said more arrests were expected in the coming days. (https://bit.ly/3eilOEd)