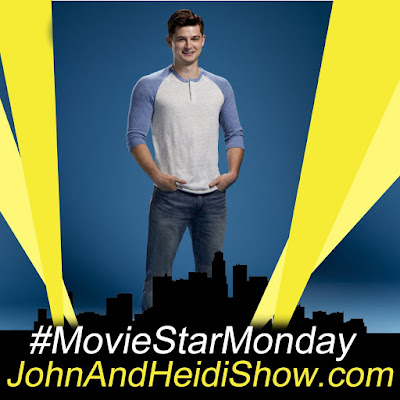 This #MovieStarMonday we visit with Kevin Bigley from UPLOAD about his new movie ROLLERS - https://amzn.to/36fjKIt

A recent poll conducted in San Francisco found that 70% of respondents believe the quality of life in the city has declined. These Respondents pointed to crime and homelessness as their top concerns. (https://fxn.ws/3hjjSMk)

According to a new study, the huge socioeconomic impacts of the pandemic will likely cause a “severe production crisis” in the coffee industry. (https://bit.ly/2UQ2o2x)

Sopranos fans continue to express their excitement after “The Many Saints of Newark” trailer was finally released. The prequel film tells the story of a young Tony Soprano. (https://bit.ly/3w7TXfK)

Courtney Love is accusing Olivia Rodrigo of copying the cover from 1994 Album, “Live Through This.” (https://pge.sx/3x5CWEo)

A husband and wife in Houston chased down an alleged “peeping Tom” lurking outside their 10-year-old daughter’s bedroom window — and shot him.(https://bit.ly/3607jAa)

A woman in California has won the right to keep her home decorated like it's from The Flintstones cartoon. (https://bit.ly/2UfBxwB)

Dozens of baby squid from Hawaii have been sent to space, as University of Hawaii Researcher Jamie Foster is studying how spaceflight affects the squid in hopes of bolstering human health during long space missions. The squid will reportedly come back to Earth in July. (https://bit.ly/3gLjF5q)

The first Cruise Ship to board passengers at a U.S. Hub in fifteen months set sail from South Florida on Saturday. Celebrity cruise lines says 95% of the passengers have been vaccinated. (https://bit.ly/3deHa4L)

The Chinese National Space Agency has released videos from a rover THEY landed on Mars. (https://cnn.it/3xc1hIH)

Sharks can live for five centuries. Greenland Sharks are known to be some of the oldest living animals in our world. Researchers did carbon dating on a Greenland Shark that was caught in 2014 and found it to be around 392 years old. Further testing revealed that our fishy friends could be up to 500 years old. Yes, that would mean that our geriatric friends would have been alive when Leonardo Da Vinci painted the "Mona Lisa."

An 11-year-old girl has become the UK’s youngest mother to give birth. (https://bit.ly/2T3cZGZ)

A man safely surrendered to police Wednesday after climbing about 45-feet up a tree, finally ending a standoff that lasted about 13 hours. Officers were called at about 1:35 a.m. after receiving reports of a vehicle crashed on railroad tracks, police say. A vehicle was found disabled on the tracks, but it had been abandoned. While searching for the driver, police heard a man screaming. The 40-year-old Columbus resident, who was the driver of the vehicle, climbed onto the roof of a house, then climbed up a pine tree. He then stayed in the tree, ignoring officers. Additional officers were called to the area, as well as FBI agents in an effort to talk the man down from the tree. Efforts to talk with the man were complicated by the size and location of the tree, which was near power lines and above a home. A fire truck with a ladder bucket was brought in to help communicate with the man. Power also was cut to several residences and a nearby manufacturing plant during negotiations. At about 4:00 p.m., the man managed to start a fire in the tree with a lighter, police say. He then climbed down the tree and was arrested without incident. The man has been charged with inducing panic, aggravated trespassing, arson, and obstructing official business, all misdemeanors. (https://bit.ly/2U4hEIQ)

In an unprovoked attack, a 7-Eleven customer was injured when a fellow patron threw a glass jar of Tostitos salsa at him with such force that the container broke on the victim’s back. According to court filings, 31-year-old Le’trail Tresalus was arrested on a felony battery charge for allegedly striking the victim with the 15.5-ounce jar inside the convenience store in St. Petersburg. The 6’ 2”, 300-pound Tresalus is locked up in the Pinellas County jail in lieu of $4,500 bond. In addition to the battery count, he is facing a theft rap for allegedly stealing a Choco Taco ice cream bar from 7-Eleven. Investigators allege that the man struck with the Tostitos jar suffered a minor laceration and “visible swelling.” A witness, cops noted, saw the attack, which was recorded by a 7-Eleven surveillance camera. Since Tresalus’s rap sheet includes prior battery and theft convictions, the charges against him were enhanced to felonies.(https://bit.ly/3gZ2MEx)