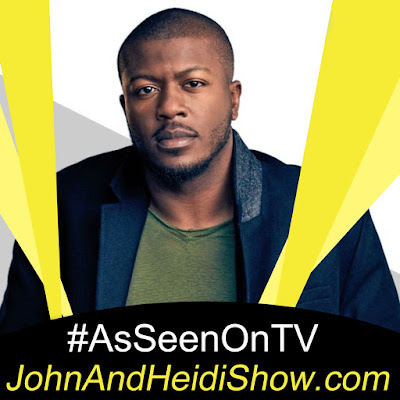 Today we visit with Edwin Hodge. He can currently be seen on Kurt Sutter's new FX series, "Mayans Mc." He is also in the upcoming Paramount feature, "Bumblebee" and "If Not Now, When?" opposite Mekia Cox. Most recently, he could be seen in the second season of The History Channel's hit series, Six, opposite Olivia Munn, Walton Goggins and Barry Sloane. Edwin Hodge also recurred last season as 'Benjamin Banneker' on Fox's "Sleepy Hollow."

His film credits include the popular Purge franchise of films, including "The Purge: Election Year", "The Purge: Anarchy" and "The Purge. He can also be seen opposite James Caan in "The Good Neighbor", which premiered at South by Southwest, and in "Red Dawn" with Chris Hemsworth and Josh Hutcherson.

On the small screen he has worked on "Chicago Fire," "As Above, So Below," "Boston Public" and "NCIS: Los Angeles," and guest starred as 'Kai Ashe' in "NCIS: Red," a two-episode spin off pilot of NCIS: Los Angeles. Edwin recurred as 'Wade' on the hit TBS comedy Cougar Town and has had roles on many other television shows including The Mentalist, Heroes, Ghost Whisperer and One Tree Hill.

A new study claims that “smart technology” is not making people less intelligent. Researchers from the Universities of Cincinnati and Toronto contend smart devices are helping to free our brains up to solve more complex problems and learn other things. The study does acknowledge that staring into a screen all day will give you “tech neck,” cause distracted driving accidents, and disrupt your sleep with harmful blue lights. (https://bit.ly/3yodhXF)

If you need further proof that Florida has fully emerged from the pandemic doldrums, two nude old guys were arrested after police spotted them having sex in public. According to an arrest report, a St. Petersburg cop caught 60-year-old Daniel McCleary and 59-year-old Donald Engstrom “engaged in sexual acts while completely naked and in public view.” After the pair was arrested, Engstrom reportedly admitted that “they were in fact having sex,” Officer Zachary Lamour reported. McCleary and Engstrom were arrested for indecent exposure and booked into the county jail on the misdemeanor charge. Both men were released yesterday on their own recognizance The report notes that an “indication of alcohol influence” was detected by the arresting officer. While Engstrom’s rap sheet includes a sole DWI conviction, McCleary has an extensive criminal history, with convictions for battery; resisting arrest; burglary; theft; domestic battery; battery on a law enforcement officer; cocaine possession; trespassing; drunk driving; disorderly conduct; probation violation; and leaving the scene of an accident. (https://bit.ly/3dMVWjl)

According to his representative, Bill Cosby is planning a new comedy tour. Cosby’s spokesperson Andrew Wyatt said that a number of Comedy Club Owners have called, suggesting that there’s a market for Cosby. (https://bit.ly/3hgIcQ4)

While delivering Independence Day wishes on social media, Matthew McConaughey said that America is “basically going through puberty” compared to other nations. (https://bit.ly/3dFGSnJ)

After disqualification from the Olympics due to marijuana in her system, runner Shacarri Richardson is admitting that she's “not a perfect person.” (https://bit.ly/3hIdWNc)

The Coors brewing company is exploring ways to advertise in people's dreams. (https://yhoo.it/3wjCNvK)

A Scientist says he’s learned to communicate with frogs. (https://reut.rs/3hjHmkd)

A Louisiana family had $50 billion accidentally deposited in their bank account, making them the 25th richest people on Earth — for less than four days. One of the account holders said, quote, “I've never seen so many zeros.” A company spokesperson for Chase Bank said “We had a technical glitch over a week ago impacting a limited number of accounts.” (https://bit.ly/3A79D6i)

The Bermuda Triangle isn't any more likely to cause a mysterious disappearance than anywhere else. This area in the North Atlantic Sea is also called "The Devil's Triangle" because it is an area of the ocean that stretches between the tip of Florida, Bermuda, and Puerto Rico. It has been thought to seemingly swallow up ships and aircrafts. Explorers as far back as Christopher Columbus have reported odd occurrences, like fireballs in the sky (that turned out to be a meteor crashing). But historians, scientists, and the U.S. Coast Guard have proven that vessels are no more likely to disappear in the Bermuda Triangle than they are anywhere else in the ocean. Many prior disappearances have been demystified as remains of numerous wrecks were discovered or explained by weather patterns in the area at that time.

Sometimes, even rescuers need a helping hand. A pet owner in Oklahoma attempted to rescue their pet cat after the animal got stuck in a tree. Unfortunately, it turns out, some trees are hard for both cats and humans to climb out of. The Tulsa Fire Department posted about the incident on its Facebook page, explaining that a crew had to be sent out to a neighborhood in Tulsa. According to the department, a cat owner had become stuck in a tree while trying to rescue their pet. The fire department shared images of the rescue operation, which show firefighters bringing a ladder up to a section of the tree that appears to be about two stories off the ground. A rescue worker can be seen guiding the cat’s owner down the ladder. One image shows the cat, safely on the ground, after it was seemingly carried out of the tree in a backpack. “Around 3:45 pm, Captain Alan Hancock and his Engine 27 A Platoon crew responded to a rescue,” the Tulsa Fire Department wrote on Facebook. "Apparently a cat climbed high up into a tree. Its owner was so concerned for the feline that he climbed up to attempt a rescue. Unfortunately, they both found themselves in a dangerous predicament high above the ground, unable to get down safely.” (https://fxn.ws/3A3LNIC)

An Ankeny man was arrested after police say he threatened to blow up a McDonald’s because the restaurant didn’t include dipping sauce for his chicken nuggets. Sgt. Corey Schneden said that 42-year-old Robert Golwitzer Jr. called the McDonald’s in Ankeny after discovering his order was incorrect. In the call, Golwitzer allegedly threatened to blow up the restaurant and punch an employee. According to a criminal complaint filed in the case, police reached out to Golwitzer at the phone number the threat was called in from. Police say he admitted over the phone, and later in an interview at the Ankeny Police Department, to making the threats. Golwitzer has been charged with the class D felony of false report of explosive or incendiary device. (https://bit.ly/35YCwni)

In 1961 The Yankees Denied Her Request To Be A Bat Girl. 60 Years Later, Her Dream Has Come True. https://www.sunnyskyz.com/good-news