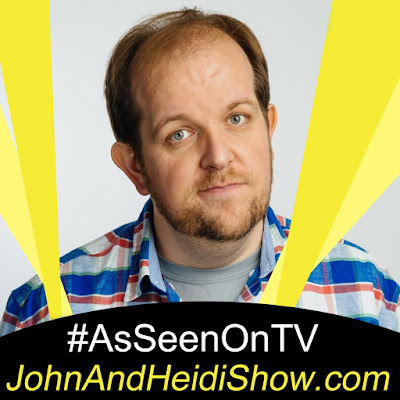 Dominic Burgess English actor Dominic Burgess will star as ‘Jerry Summers,’ the childhood friend and former patient of ‘Dr. Christopher Duntsch’ also known as the titular ‘Dr. Death,’ played by Joshua Jackson. Based on a true story and hit podcast, “Dr. Death” follows patients entering the operating room of ‘Dr. Duntsch’ for routine spinal surgeries and leaving them permanently maimed or dead as two fellow surgeons and a young Assistant District Attorney set out to stop him. Alec Baldwin, Christian Slater, Carrie Preston, and Anna Sophia Robb also star. FYI, the man who Dominic plays tragically did pass as a result of his injuries last year.

Dominic is best known for his appearances on some of the most popular television shows, including NBC’s “The Good Place,” The CW’s “The Flash,” Netflix’s “Santa Clarita Diet,” ABC’s “Modern Family,” HBO’s “The Leftovers, FX’s “It’s Always Sunny in Philadelphia,” and more.

A survey finds we stop worrying about what other people think of us at the age of 46. The survey of adults 55-plus also found we don’t feel comfortable in our own skin until we turn 42.

A new study reveals over one in three people admit they’ve ordered food they didn’t actually eat so they could post a picture of it on social media. In a survey of 2,000 people, 40% admit to uploading images of food or beverages that they themselves did not consume. (https://bit.ly/3C9p6Uw)

A 20-year-old man is facing charges of public intoxication and indecency after Knoxville Police say he took his clothes off in the middle of Broadway and attempted to enter a passing car. Anthony Webb, 20, was charged with public intoxication, public indecency, and resisting arrest. Officers responded to the 2800 block of Broadway just after 9 p.m. Monday, June 14 for multiple reports of naked person in the middle of the roadway. According to an incident report, Webb approached a vehicle in the roadway and attempted to gain entry. Police also said he exposed himself to patrons of nearby businesses and passing cars when attempting flips in the roadway. Responding officers reported Webb was in an incoherent state and appeared to be under the influence of a narcotic. He attempted to flee from law enforcement before being restrained by three officers. Webb was taken to UT Medical Center for an evaluation.

A new “Venom: Let There Be Carnage” movie trailer has been released. Venom sees the return of Tom Hardy as Eddie Brock, a journalist who becomes the host of an alien symbiote that turns him into the titular head-chomping anti-hero. (https://bit.ly/3fmwW3m)

The U.S. women’s soccer team lost to Canada in the semifinals by a score of 1-0. (https://wapo.st/2Vnytin)

An Australian Canoer won a gold medal after using a condom to seal a hole in her kayak. (https://bit.ly/3xf4KoZ)

A Florida Man washed up on the beach after attempting to walk hundreds of miles across the ocean in a floating hamster wheel. (https://bit.ly/2TN7yvW)


Stressed men have altered proclivities. A 2012 study published in the journal PLoS ONE found that men who are feeling stressed out prefer women with curvier figures. The study had one experimental group perform a stressful activity, while the other control group did not. Afterward, they were shown pictures of women with various body types. When the men in the control group were asked to rate the women on a scale of one to nine, they rated pictures of women with higher BMIs as the most attractive.

A California woman was attacked by a crocodile while vacationing in Mexico last month — and was able to briefly fight off the beast before others intervened to save her. (https://bit.ly/3zYbFVF)

A Texas man had his sentence more than doubled after he was caught running a $12 million invoice fraud while awaiting trial for a separate multimillion-dollar cattle scam. 31-year-old Stewart Kile Williams of Sweetwater had pleaded guilty in March to creating a trench-digging service for the oil industry and defrauding a finance company through the use of phony invoices. Williams was alleged to have run the scam starting in late 2018 until early the following year, while he was out on bond in a cattle scam case in which he was accused of stealing $2.5 million from a ranch through the sale of non-existent cattle. “They say insanity is doing the same thing over and over and expecting different results. Mr. Williams wasn’t insane, but he was brazen. While on pretrial release for one fraud in south Texas, he had the audacity to perpetrate a similar fraud in north Texas,” said Prerak Shah, the acting U.S. attorney for the northern district of Texas. Williams last week was sentenced to nearly nine years in federal prison for the invoice scam on top of the nearly six years he had already received in the cattle case, in which he pleaded guilty in 2019. He was also ordered to pay an additional $7.4 million in restitution on top of $2 million in the cattle scam.(https://on.mktw.net/3BMv4dK)

A 31-year-old Michigan woman is recovering after she accidentally set herself and her car on fire this week while trying to kill bed bugs. According to Fox 2 Detroit, the woman was treated at McLaren Oakland Hospital for second-degree burns caused by setting rubbing alcohol on fire inside her vehicle in hopes of killing the bed bugs. The Oakland County Sheriff’s Office responded to a call Tuesday for a reported car fire on Perry Street around 1:40 p.m. When they arrived, deputies found the woman and discovered she’d had a panic attack after finding bed bugs in her car. In an effort to kill them, she poured the rubbing alcohol in the car and set it on fire. The Waterford Fire Department assisted in putting out the fire. (https://bit.ly/3lggoxC)

Father Saves Twin Daughters From House Fire Despite Not Being Able To See
https://www.sunnyskyz.com/good-news