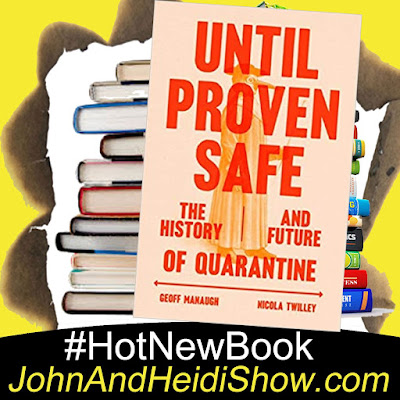 This weekend we speak with author Nicola Twilley about her new book “Until Proven Safe: The History And Future Of Quarantine” https://amzn.to/2X5aEN3

A new study claims vaccinated people can carry as much virus as others. (https://bit.ly/3C6eshj)

Pets bring companionship and humor into our lives, but it’s not always a smooth ride. In fact, a new study finds the average pet parent has 231 “mini-panics” each year. The survey of 2,000 dog and cat owners delved into these panic points, with researchers finding the average respondent has just over four panics per week. It turns out many of those panics revolve around their furry friend’s bathroom habits. Top mini-panics include their pet having irregular bowel movements (47%), their pet not eating a normal amount (47%), and their pet’s poop being an unusual consistency (46%). Also making the list are incidents where someone’s pet eats something they shouldn’t have (46%) or not being able to find their pet in the house (42%).

An “aggressive” passenger on a Frontier Airlines flight was duct-taped to his seat after allegedly groping two flight attendants and assaulting another. Cellphone footage shows the accused frisky flier, 22-year-old Maxwell Berry, being duct-taped to the back of a seat on Saturday’s Frontier flight from Philadelphia to Miami, where he was arrested by awaiting cops on three counts of battery. The video also shows Berry scuffling with a male flight attendant and yelling profanities while sitting in a window seat. An arrest report alleges Berry ordered two drinks and then asked for another before brushing his empty cup against the backside of a female flight attendant. The flight attendant told Berry “Don’t touch me” before he started to complain about his gum and wrapped it in a napkin. Berry proceeded to spill his new drink on his shirt, prompting him to go to the bathroom and come out “shirtless.” He then walked around the plane for roughly 15 minutes before groping the chest of two flight attendants. Berry later punched a male flight attendant who was asked to watch him following the in-flight chaos. After being duct-taped to his seat, the plane landed in Miami and Berry was arrested. (https://bit.ly/3Cef3gY)

Rebel Wilson revealed that she's lost 65 pounds to have a better chance of getting pregnant. (https://pge.sx/3rNG3yV)

In China, major brands are seeking to replace celebrities like pop musicians with animated holograms so that they don't create distractions with their off-stage behavior. (https://bit.ly/3xgXARn)

Bill and Melinda Gates have officially finalized their divorce. (https://cnn.it/3jhStv1)

Three visitors to the world’s largest Titanic museum (in Tennessee) have been hospitalized after an iceberg wall collapsed. (https://bit.ly/3lrKhLq)

Canada once heavily targeted LGBTQ individuals. Our Canadian neighbors may not have been as friendly as we thought. During the Cold War era, Canada spent thousands on its historic "Fruit Machine." This device was supposedly able to identify gay men and lesbian women by monitoring subjects as they were shown pornographic images with homosexual content. This, unfortunately, led to the wrongful persecution of many of Canada's fine citizens. In 2017, Prime Minister Justin Trudeau apologized for the mistreatment of these people.

French President Emmanuel Macron visited the French Polynesia Islands and got completely covered in shell-necklaces and traditional leis by the officials greeting him.(https://bit.ly/375lp3J)

Police are working to determine the cause of a tractor-trailer crash in Braintree that left a home with extensive damage. The crash happened at about 6:10 p.m. Saturday on River Street. Glenn Fillmore, who lives nearby, says his family was just getting ready to eat dinner when they heard "a heck of a noise." "We come running out and saw the truck slammed into the side of the house," Fillmore said. The crash into a front corner of the recently-renovated home crushed the siding and shattered a window. "This is terrible. These people just moved into this house. It's a brand-new house," said neighbor Bob Joyce. Fillmore said he and another neighbor ran to the truck to check on the driver, but only found two dogs inside the cab. No one was inside the home at the time of the crash. Fillmore said police spoke with the homeowners through a home security camera system. Braintree police are investigating the cause of the crash. (https://bit.ly/3j9QDfZ)

A B.C. man who didn't feel like cutting his grass has been fined more than $1,000 for the fire he started. Mounties on the Sunshine Coast said they and firefighters were called to a home on the Port Mellon Highway for a report of heavy smoke. The fire was called in by passengers on a passing BC Ferries vessel, who could see the fire from the water. The home is not far from the Langdale ferry terminal. According to the RCMP, the fire was about 10 feet in diameter, and had to be extinguished by firefighters. As for the cause of the grassfire, in this case it was undoubtedly human. Mounties said the homeowner told them that instead of cutting the tall grass, he'd just decided to burn it. The province is currently under several burn bans due to the risk of wildfires in what has been an unusually hot and dry summer. The homeowner was warned by police about the recklessness of his actions, the RCMP said. He was also fined $1,150 under the provincial Wildfire Act. (https://bit.ly/3rIENgC)