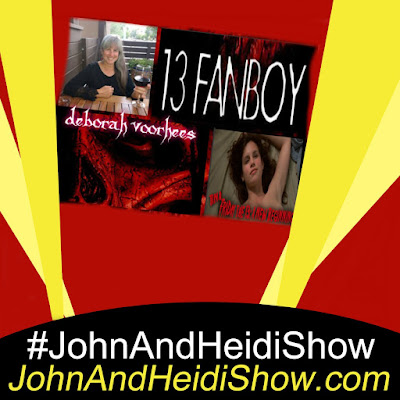 This FRIDAY THE 13TH we have Deborah Voorhees (Friday The 13th: New Beginnings) to visit about her NEW FILM 13 Fanboy that comes out in a few months.https://www.facebook.com/13Fanboy

National Blame Someone Else Day


VEYS, STUDIES & SUCH: Brought to you by BetterCreditCards.com
Scientists now believe that an Amazonian Tribe that lives in the wilderness may hold the key to having a highly healthy brain. (https://bit.ly/2VAnjaw)

A study found that if you’re drinking beer while a song that you like is playing, you’ll get additional enjoyment out of the beer.

A passenger on a flight from Philadelphia to Miami got way too drunk, started ranting that his family is rich, and eventually had to be duct taped to his seat. (https://yhoo.it/3xs2xXi)

Jamie Lynne Spears posted a bizarre social media post on Saturday in which she sobbed to her three year old daughter over the Britney Spears drama. https://pge.sx/2VHBNow

Meghan Markle's half brother, Tommy Markle, ripped the actress on an episode of Australia's "Big Brother VIP," saying he warned Prince Harry that she was controlling and shallow. (https://pge.sx/3jtsu3O)

Debra Newell, the victim in the "Dirty John" TV Documentary, claims OJ Simpson once asked her out. (https://pge.sx/3AsQew5)

Jennifer Aniston said that she has cut ties with “a few people” who have refused to receive the COVID-19 vaccine. (https://pge.sx/3jlQV3f)

Some tourist areas in Lake Tahoe are being shut down after chipmunks in the area were found to be carrying the medieval plague. (https://bit.ly/3xsd84O)

A 92-year-old woman in Germany was pronounced dead at a retirement home because the doctor did not detect any breathing or pulse. She was then transported to a mortuary for funeral preparations. Later that same evening, a funeral home employee heard screaming. The employee was stunned to discover that the 92-year-old was actually alive.

A monkey preserve in Japan has seen its first ever female assume the leadership role of a monkey troop. (https://bit.ly/3fLGLbo)

Was this a case of paranormal smack-tivity? A Colombian mayor baffled his social media followers after sharing a video of an alleged ghost attacking one of his security guards. “I want to share this video with you today, emphasizing that, as mayor, I have the conviction that faith has insurmountable power,” wrote Jose Manuel Rios Morales, mayor of Armenia. The official claimed that the assault took place in his offices while guards were conducting their nightly patrols. In the grainy, minute-long clip, the officer can be seen strolling down the hallway before veering violently into a wall, as if flung by a supernatural entity. The guard then tries to crawl along the ground, where he appears to resist an invisible force tugging him along. The spooky footage concludes with two of his fellow watchmen rushing to his aid. However, the public need not fret that the halls of government are potentially haunted: Mayor Morales assured us that he has enlisted a special team of religious ghostbusters to help exorcise the phantom menace. “I want to give everyone a little peace of mind and let them know that, in the company of the Bishop and other religious leaders, we will bring God’s blessing to every corner of this workplace,” claimed the government leader. “We ask for respect and a union in prayer, and we assure you that nothing can steal our peace and tranquillity because we are protected by the hand of our Lord.” (https://bit.ly/3jpFVSn)

Police in London, Ontario, are seeking the public's assistance with a "Dangerous Operation causing Bodily Harm" investigation after a 38-year-old man hit one of his neighbors with his car. Authorities allege that the man got into his vehicle and purposely struck the victim. His motive? The man he ran over had reportedly been peeing on his front lawn. "On Friday, July 30th 2021 London Police were called to an address in the east end for a male that had been struck by a car," reported the London Police Service. "Police attended in an emergency fashion and upon investigating found that this incident was the result of a neighbor urinating on another neighbors front lawn. The homeowner responded by getting into his vehicle and purposefully striking the male with his vehicle." The 38-year-old man who retaliated against the urinating neighbor has been charged with Dangerous Operation of a Vehicle causing Bodily Harm — a criminal offense that, if proven in court, carries a penalty of up to ten years in prison. As for the urinator, the severity of his injuries is unclear, but we assume he'll definitely use a toilet next time. (https://bit.ly/3yFnBeJ)

Police Officer Is Filmed Giving A New Pair Of Sneakers To A Man In Need
https://www.sunnyskyz.com/good-news/