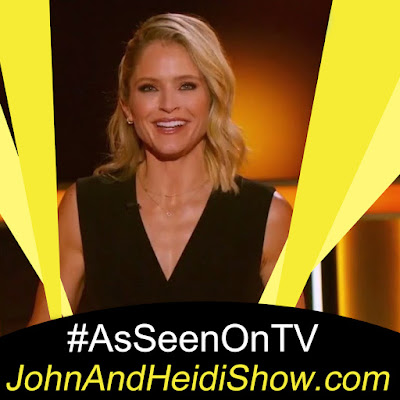 Our guest today is Sara Haines. (The View, GMA Day with Michael Strahan) In August 2020, ABC announced that Sara would be rejoining The View as one of its permanent co-hosts. Just a couple of months later, she was revealed as the host of The Chase, too. “I’m so excited!” she wrote in the caption of an Instagram post promoting the show. “I had the BEST time working with these guys & hosting the show.” If you’re wondering who “these guys” are, it’s none other than Jeopardy! champions Ken Jennings, James Holzhauer, and Brad Rutter! Sara is host of The Chase. Sundays at 9/8CT on ABC. …and streaming on ABC and on Hulu. ... A heart-racing quiz show where three competitors face off against the Chaser, a ruthless quiz genius determined to stop them.
https://abc.com/shows/the-chase/episode-guide/season-01/01-the-chase-is-on

A new study of 2,000 people finds that 66% admit to having unofficial assigned seating throughout their homes.(https://bit.ly/3xODyOg)

A new study reveals nearly half of American adults have tried marijuana. (https://bit.ly/3AP12of)

A 28-year-old Lincoln man was arrested after police said he broke into two homes and shoplifted a pack of Southern Comfort shooters from a nearby store in a matter of minutes Sunday morning. Officer Erin Spilker said a woman and a man saw Baron Collier holding the woman's purse inside a home at about 11:00 a.m. Sunday. Collier fled, Spilker said, but a neighbor saw him rummaging through the purse in their backyard shortly after. Using a description given by witnesses, police found Collier behind a liquor store. Spilker said he had stolen a 12-pack of whiskey shooters from the store. As officers canvassed the neighborhood, Spilker said they learned that Collier had broken into another house in the area, where he kicked in the back door. Collier was arrested on suspicion of burglary, criminal mischief, shoplifting, and two counts of criminal trespassing. He was also arrested on suspicion of a robbery that occurred July 22nd at the NP Mart. He was taken to the Lancaster County jail. https://bit.ly/3Ata2iP

Oscar nominated actress Debra Winger reportedly quit the 1992 movie “A League of Their Own” because Madonna was cast in the women’s baseball dramedy. Serious actress Winger even trained with the Chicago Cubs for three months before dropping out of the role. (https://pge.sx/3iK1CNX)

A company says it has built a device that can capture smells like a human nose.(https://bloom.bg/3k1RPlP)

An estimated 2,000 people travel across the U.S. each year on a bicycle!

A whopping 45 percent of Americans have worn the same pair of underwear for two days or longer. The survey by underwear company Tommy John asked 1,000 men and women about their hygiene habits. 13 percent of people said they’d worn the same pair for a week or more. Men are two times more likely than women to wear their underwear for more than a week. The underwear company suggests you should swap out your old underwear for a new pair every six months to reduce your risk of bacterial and yeast infections. At least 85 percent of respondents said they didn’t know how long they’ve owned their oldest pair of intimates.

An Oklahoma man escaped police custody during a prison transport, stole an ATV while handcuffed, and led police on a highspeed chase before flipping the vehicle and landing in a pool of mud. (https://bit.ly/3xT9Ho0)

A restaurant in New York employs grandmas as chefs. It is true that everybody thinks their Italian grandma—or nonna—is best cook around. So it was a genius idea when Joe Scaravella decided to gather up as many nonnas as he could to work in his restaurant in Staten Island. Enoteca Maria combines the skill of these delightful, talented grandmothers and has them create and cook recipes from their own family cookbooks.

A nurse in Germany is said to have tricked thousands of patients by injecting them with saline solution instead of the COVID-19 vaccine. (https://n.pr/3iCJMMK)

An Ohio man convicted of murder is getting a new trial later this month, but before his big day in court, he walked down the aisle to marry the sister of the man he is accused of killing. Crystal Straus married John Tiedjen at his home in Cleveland over the weekend. Teidjen was convicted of killing her brother Brian McGary in 1987. In June, after 32 years behind bars, Cuyahoga County Judge Dick Ambrose threw out Tiedjen’s murder conviction and granted him a new trial. Tiedjen’s defense attorney had submitted dozens of crime photos and police reports that were not seen in the original trial. That is when Straus wrote a letter to Tiedjen, who was still in prison, offering her forgiveness and belief that he did not kill her brother. “I wrote her a letter back and said ‘I didn’t do it. Take a look at this stuff,’” Tiedjen said. Tiedjen is still on house arrest, but as he awaits a new trial, he hopes the court will allow him to get the surgery he says he will need to have sight in his left eye. The first hearing the Tiedjen’s retrial is currently set for August 31st. (https://bit.ly/2VLPT8R)

A man has been arrested after causing a disturbance at the Easton Town Center AMC movie theater Saturday night. 25-year-old Benjamin Pendleton was arrested and faces a misdemeanor charge of inducing panic. Police said they received reports of an active shooter around 8:54 p.m. However, Columbus Police Sgt. James Fuqua said there were no shots fired at the theater. Fuqua attributed the initial, erroneous reports of shots being fired to young people fleeing the theater in a panic. “Because the young people who were inside were yelling this as they were coming out, word spread very, very quickly,” Fuqua said. According to Fuqua, Pendleton entered the theater toward the end of a showing of “The Suicide Squad,” ran to the back of the theater, and began screaming, “I am the king of this ******* town,” obscenities, and other things. Pendleton then reached into a bag he was carrying, which caused people in the theater to panic and run out. Some movie patrons leaped over a railing, suffering minor injuries. Otherwise, no other injuries were reported. As a precaution, all stores and restaurants in the area were evacuated, including AMC, H&M, and The Cheesecake Factory. (https://bit.ly/3xx3FsT)

Woman Pays For Lost Athlete's Taxi To Get To His Race. He Won Gold, Then Found Her https://www.sunnyskyz.com/good-news/